A history of the East Devon Business Forum, part seven ..... "The local mafia": Conflicts of interest in East Devon

Following the Daily Telegraph's sting on Cllr Graham Brown, chair of the EDBF:
Futures Forum: A history of the East Devon Business Forum, part five....... Scrutiny committee task force "to produce an in-depth report on the EDBF, to include all business engagement and its relationship with the council"

... an extraordinary piece of investigative journalism came out:
New report: Scaring the living daylights out of people

It was put together by Anna Minton, who has been very critical of how public authorities have abused their stewardship of public space:
Futures Forum: Public Space

Council is highlighted in democracy report

A LEADING national journalist and researcher has included East Devon District Council in a report she has written on the local democratic process.

In her 28-page report entitled, Scaring the Living Daylights out of People: The Local Lobby and the Failure of Democracy, Anna Minton, describes the council as being "the subject of ongoing controversy over contentious planning decisions and allegations of conflicts of interest which date back more than 20 years".

The London-based author refers to concerns surrounding the East Devon Business Forum which is "perceived to have significant influence over how much land is developed in the area".

She also refers to concerns raised recently regarding the forum's former chairman Graham Brown who was also a councillor and ran his own planning consultancy business.

Reference is made to the history between the forum's vice chairman Roy Stuart, a prominent landowner, and Mr Brown.

In 1990 Mr Stuart, then vice chairman of the council's development management committee, was forced to resign as a councillor after planning permission was given for development on his own land. Mr Brown resigned in sympathy.

Ms Minton includes comments by West Clyst resident Paul Newman, who expressed his concern to the writer that proposals to build a 450-home development on Grade One agricultural land owned by Mr Stuart was "pre-determined".

Despite a vast number of objections, Mr Newman said the council asked that the planning application be brought forward ahead of the formulation of its Local Development Framework.

The LDF, now called the Local Plan, is being drawn up and sets out where thousands of homes could be built over the coming years.

The 42-year-old journalist said the project had long been an ambition of hers, which being awarded a Fellowship in the Built Environment by the Royal Commission for the Exhibition of 1851 has enabled her to fulfil.

However, a spokesperson for the council said Ms Minton did not contact the local authority for a comment so does not believe the report is balanced.

"The report is very much about the flaws in democracy on all sorts of levels," she explained. "What I've tried to do is present a snapshot of local democracy across the country, picking out examples. I have included a spectrum of different types of local authorities, including two London Metropolitan, and wanted a rural authority.

"I looked at East Devon because I became aware of issues regarding the local opposition to the Tesco development in Seaton when writing a piece for the Guardian a couple of years ago. It seemed local people at the time were overwhelmingly against it and yet it went through.

"In the course of my research I heard all sorts of things about the council.

"It seems quite clear that for the last 20 years there have been a large number of concerns about the operation of the council subverting the democracy process. In terms of conflict of interest, as with the issues surrounding former councillor Graham Brown, this is a concern in other local authorities around the country.

A council spokesperson, added: "The council is not making any public comment about issues related to the Graham Brown case until such time as the police investigation has been completed. We are surprised that a journalist would publish a piece like this without following the established protocol of approaching the council first to ensure the reader gets a balanced view."

Council is highlighted in democracy report | Exeter Express and Echo Here is the relevant chapter in jpg format: 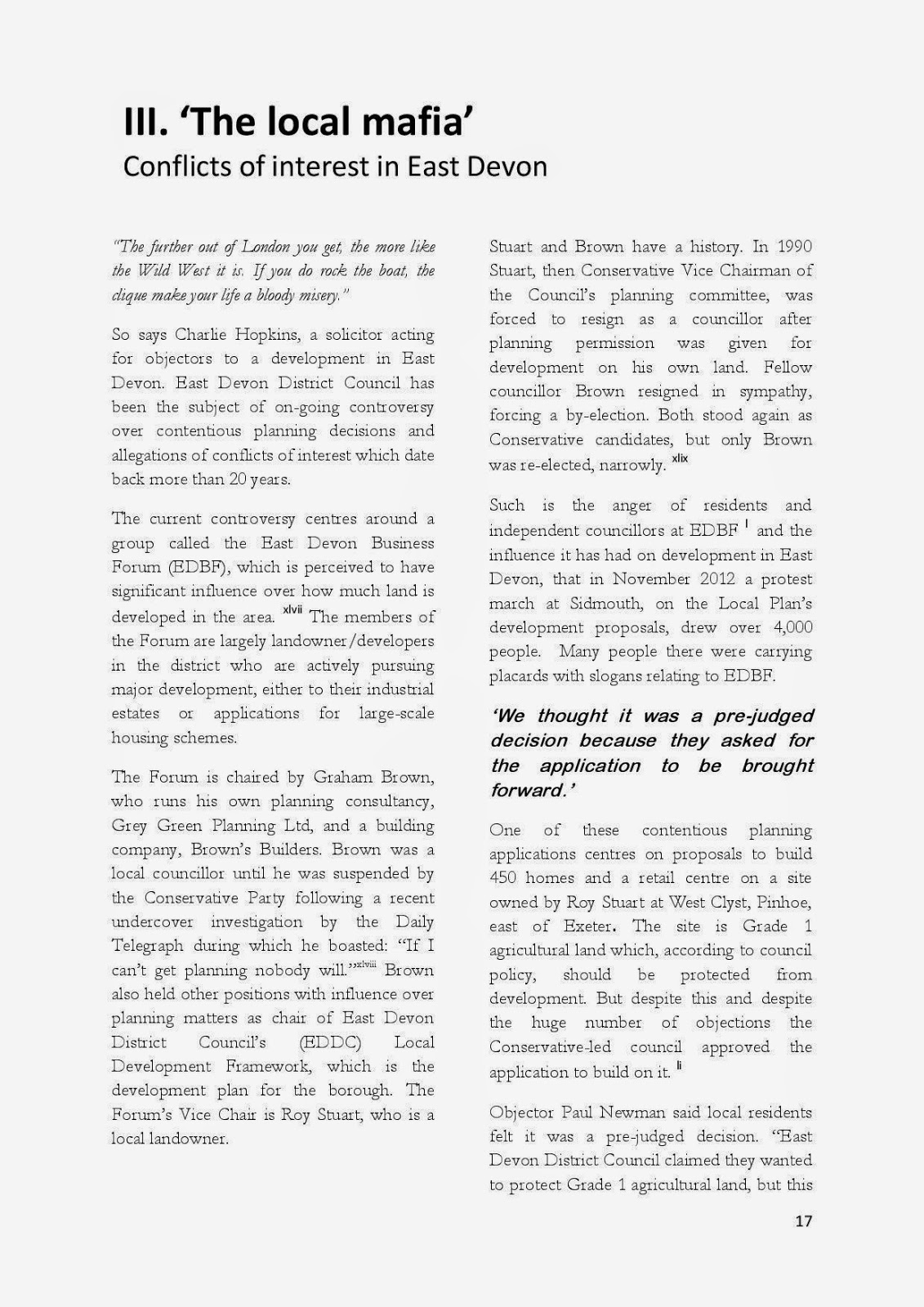 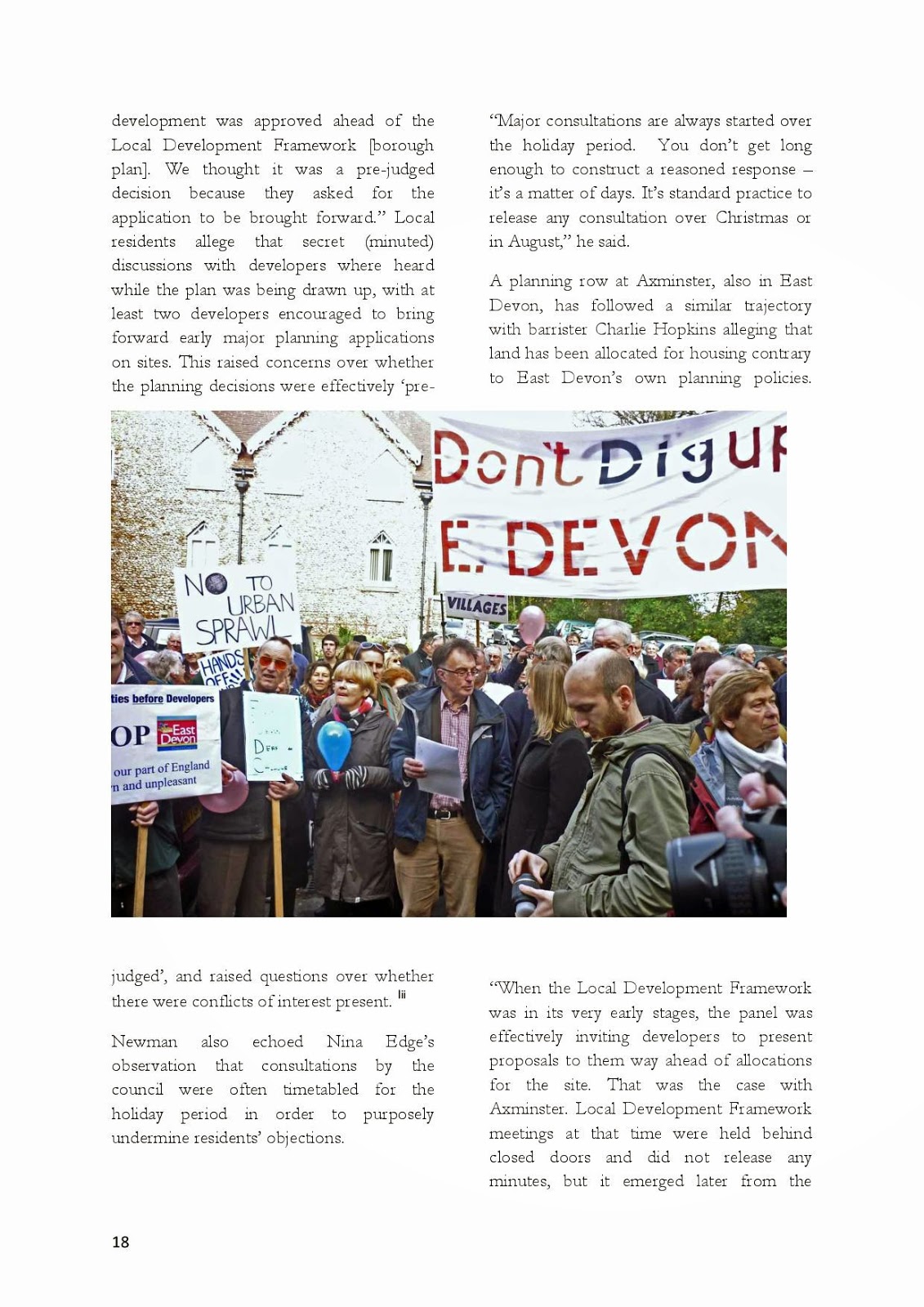 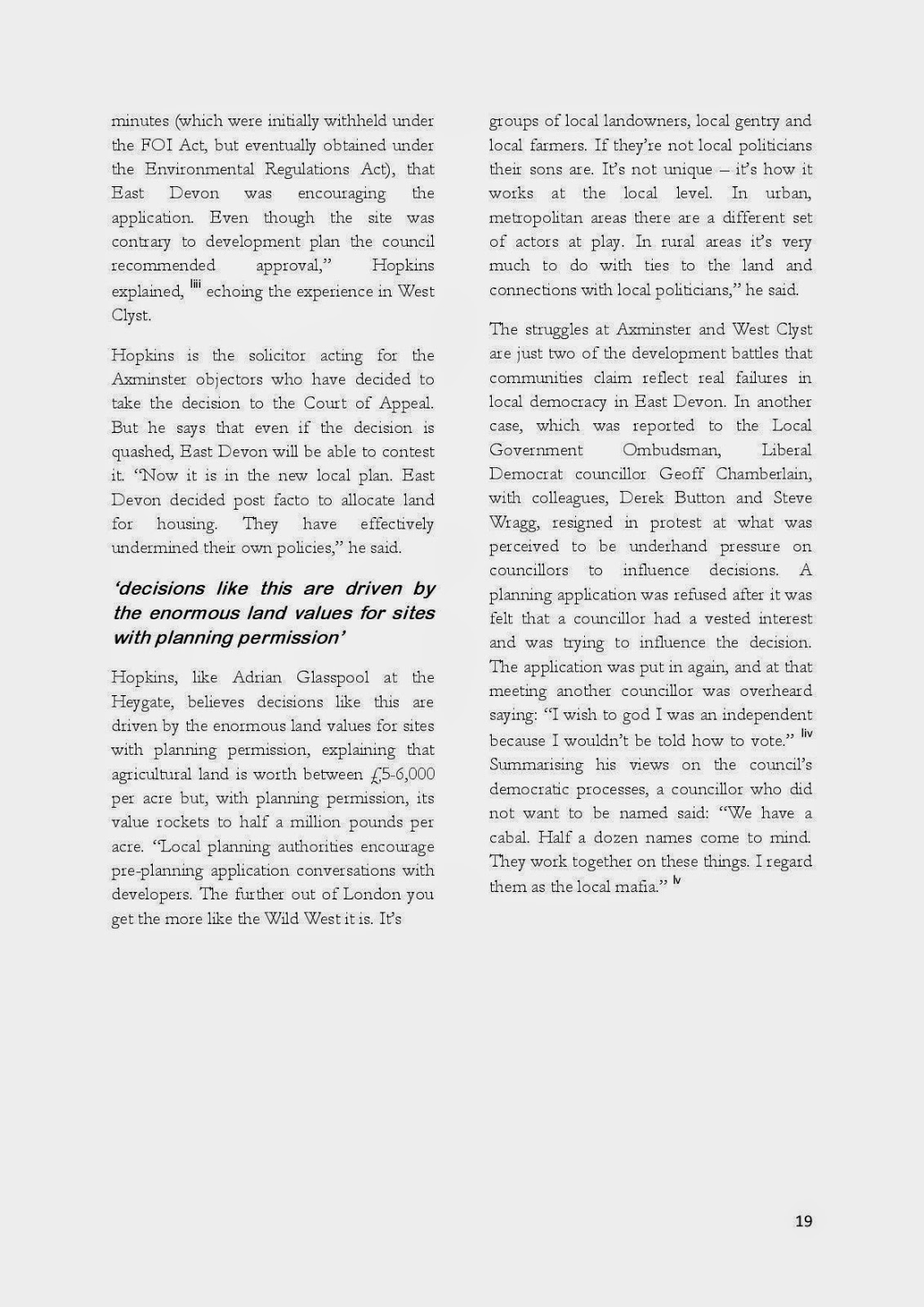 New report: Scaring the living daylights out of people

And here it is in Word format:

Conflicts of interest in East Devon

The current controversy centres around a group called the East Devon Business Forum (EDBF), which is perceived to have significant influence over how much land is developed in the area. [xlvii] The members of the Forum are largely landowner/developers in the district who are actively pursuing major development, either to their industrial estates or applications for large-scale housing schemes.

The Forum is chaired by Graham Brown, who runs his own planning consultancy, Grey Green Planning Ltd, and a building company, Brown’s Builders. Brown was a local councillor until he was suspended by the Conservative Party following a recent undercover investigation by the Daily Telegraph during which he boasted: “If I can’t get planning nobody will.” [xlviii] Brown also held other positions with influence over planning matters as chair of East Devon District Council’s (EDDC) Local Development Framework, which is the development plan for the borough. The Forum’s Vice Chair is Roy Stuart, who is a local landowner.

Stuart and Brown have a history. In 1990 Stuart, then Conservative Vice Chairman of the Council’s planning committee, was forced to resign as a councillor after planning permission was given for development on his own land. Fellow councillor Brown resigned in sympathy, forcing a by-election. Both stood again as Conservative candidates, but only Brown was re-elected, narrowly. [xlix ]

Such is the anger of residents and independent councillors at EDBF [ l ] and the influence it has had on development in East Devon, that in November 2012 a protest march at Sidmouth, on the Local Plan’s development proposals, drew over 4,000 people. Many people there were carrying placards with slogans relating to EDBF.

One of these contentious planning applications centres on proposals to build 450 homes and a retail centre on a site owned by Roy Stuart at West Clyst, Pinhoe, east of Exeter. The site is Grade 1 agricultural land which, according to council policy, should be protected from development. But despite this and despite the huge number of objections the Conservative-led council approved the application to build on it. [li ]

Local residents allege that secret (minuted) discussions with developers where heard while the plan was being drawn up, with at least two developers encouraged to bring forward early major planning applications on sites. This raised concerns over whether the planning decisions were effectively ‘pre-judged’, and raised questions over whether there were conflicts of interest present. [lii ]

Newman also echoed Nina Edge’s observation that consultations by the council were often timetabled for the holiday period in order to purposely undermine residents’ objections.

“Major consultations are always started over the holiday period. You don’t get long enough to construct a reasoned response – it’s a matter of days. It’s standard practice to release any consultation over Christmas or in August,” he said.

A planning row at Axminster, also in East Devon, has followed a similar trajectory with barrister Charlie Hopkins alleging that land has been allocated for housing contrary to East Devon’s own planning policies. “When the Local Development Framework was in its very early stages, the panel was effectively inviting developers to present proposals to them way ahead of allocations for the site. That was the case with Axminster. Local Development Framework meetings at that time were held behind closed doors and did not release any minutes, but it emerged later from the minutes (which were initially withheld under the FOI Act, but eventually obtained under the Environmental Regulations Act), that East Devon was encouraging the application. Even though the site was contrary to development plan the council recommended approval,” Hopkins explained, [liii] echoing the experience in West Clyst.

Hopkins is the solicitor acting for the Axminster objectors who have decided to take the decision to the Court of Appeal. But he says that even if the decision is quashed, East Devon will be able to contest it. “Now it is in the new local plan. East Devon decided post facto to allocate land for housing. They have effectively undermined their own policies,” he said.

Hopkins, like Adrian Glasspool at the Heygate, believes decisions like this are driven by the enormous land values for sites with planning permission, explaining that agricultural land is worth between £5-6,000 per acre but, with planning permission, its value rockets to half a million pounds per acre. “Local planning authorities encourage pre-planning application conversations with developers. The further out of London you get the more like the Wild West it is. It’s groups of local landowners, local gentry and local farmers. If they’re not local politicians their sons are. It’s not unique – it’s how it works at the local level. In urban, metropolitan areas there are a different set of actors at play. In rural areas it’s very much to do with ties to the land and connections with local politicians,” he said.

The struggles at Axminster and West Clyst are just two of the development battles that communities claim reflect real failures in local democracy in East Devon. In another case, which was reported to the Local Government Ombudsman, Liberal Democrat councillor Geoff Chamberlain, with colleagues, Derek Button and Steve Wragg, resigned in protest at what was perceived to be underhand pressure on councillors to influence decisions. A planning application was refused after it was felt that a councillor had a vested interest and was trying to influence the decision. The application was put in again, and at that meeting another councillor was overheard saying: “I wish to god I was an independent because I wouldn’t be told how to vote.” [ liv] Summarising his views on the council’s democratic processes, a councillor who did not want to be named said: “We have a cabal. Half a dozen names come to mind. They work together on these things. I regard them as the local mafia.”[ lv]

Local objectors to development claim they face a cocktail of intimidation, unsympathetic press coverage and underhand tactics. Solicitor Charlie Hopkins highlighted the extent of intimidation individuals are subjected to, pointing to the experience of Sandra Semple, the former independent Mayor of Seaton, a seaside town in East Devon.

lviii ‘Why so much negativity in Seaton?’ Midweek Herald, letters. 28.2.12 Interview with Charlie Hopkins


www.spinwatch.org/images/Reports/Scaring_the_living_daylight_final_27_March_13.pdf
.
.
.
Posted by Jeremy Woodward at 15:07

Thank you for the various information, hopefully useful for everyone