This letter appeared in yesterday's Herald:

Now that the government has decided to review the charges made by energy companies, it seems appropriate to review the whole structure of pricing of these so-called privatised utilities.

I understand that in Norway the pricing is the complete opposite of that which we have in the UK. In Norway, there are no standing charges and the first usage band for charging is the cheapest. The size of the band is geared so that someone can exist but with care – whilst only suing the cheapest band. Any extra use is charged at increasingly higher rates.

For utilities, which are really necessities of life, this seems a much more appropriate way to structure pricing. It means that even the poorest in society can get their utilities at the lowest rate. It also means that profligate us of increasingly scarce utilities is charged significantly more.

In the UK there are generally standing charges of around £100 or more per year for each of electricity and gas.

It has just been published that our MP Hugo Swire spends over £3,000 per year on energy for his second home. Presumably he is not in residence there full-time. By contrast, my energy bills for my only home are about £800 per year. He is on a generous MP’s salary and allowances and I am a pensioner.

The same applies to water charges – where the standing charges make up a third of my metered usage bill.
It seems all the wrong way round.

Energy bills can be difficult to understand, with even simple things like how much you're paying seemingly hidden.
YouGov research on behalf of uSwitch found 75% of people find energy bills confusing, and only 4 in 10 could understand the calculations on their bill.
Energy bills explained - a guide to energy bills

Davey: Big energy companies must put customers in control
Reforms to make the energy market competitive and work in the public interest unveiled as part of the Annual Energy Statement 2013

Consumers will find it easier to switch and get the best deal, forcing energy companies to compete much more actively for their custom, as part of reforms to ensure the energy market is truly competitive and working in the public interest, Energy and Climate Change Secretary Edward Davey announced today.
Mr Davey announced plans to make switching simpler and quicker, and a new probe into energy firms’ accounts, to make them more transparent on profits and prices, as well as increasing penalties for market manipulation and regularly checking that the market is working properly in today’s Annual Energy Statement.
Davey: Big energy companies must put customers in control - Press releases - GOV.UK
https://www.gov.uk/government/uploads/system/uploads/attachment_data/file/244586/domestic_prices_methodology.pdf

Today most customers pay for gas and electricity on either a standing charge tariff; or a two-tier tariff (a higher rate for the first block of units and a second lower rate for all further units.) There is also a successful history of simple time-of-use off-peak electricity tariffs for UK households (e.g. Economy 7). Smart tariffs used in other countries have been mainly time-of-use (including critical peak pricing), designed to reduce peak demand for electricity, to help improve security of supply or to reduce the investment costs of meeting peak demand . There has been far less use of energy saving or overall demand reduction tariffs, such as rising block tariffs and so far there have been no trials of smart tariffs for gas, although Ireland is considering one.

Australia and Germany each just had an election. In both cases electricity prices were an election issue. That seems fair enough given that in both countries they are paying significant more $/kWh than most countries.
But now Nova Scotia is heading to the polls and electricity prices are a key issue because they have ‘rocketed’ to 0.15 $/kWh (Canadian). That is indeed high by Canadian standards, but it is a bargain globally.
Out of curiosity I thought I’d crunch the numbers to see who really is paying a lot for their power.
Kilowatt Hours Electricity Costs Around the World | The Energy Collective

It is now widely accepted that a 2 degree rise in average global temperature is a critical threshold, beyond which dangerous climate change will become inevitable. The avoidance of this requires global emissions reductions far beyond those codified in the international agreements to which the UK is currently a party. Even so, while the UK is on course to meet its binding Kyoto 2010 target of a 12.5% greenhouse gas emissions reductions relative to 1990, it is unlikely to meet the domestic target for a 20% reduction in CO2 emissions over the same period. Much more radical action is therefore needed to curb UK emissions from all sectors, including those resulting from household demand for electricity and gas, on which this report focuses.

As the figures below illustrate, household demand for electricity and gas has grown consistently over the past three decades in the UK, and although emissions from household electricity demand fell during the 1990s as a result of changes to the generating fuel mix, these reductions are now being lost as those changes in the mix are reversed, and demand
increases. 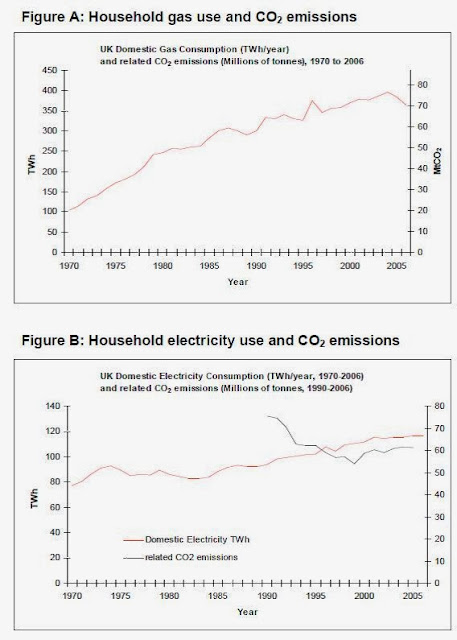 These trends are simply unsustainable in the context of the obvious and urgent need for substantial reductions to UK greenhouse gas emissions. Two possible responses arise: (1) reducing household demand for energy by changing behaviour and improving the thermal efficiency of our homes, and the electrical efficiency of our lights and appliances; (2) developing lower carbon sources of heat and power to meet household demands. While it is inevitable that a combination of these approaches will be required to achieve the necessary long-term, deep emissions reductions, demand management offers more cost effective and rapid solutions in the shorter term, since eliminating wasteful household use of energy has lower up-front investment costs, and immediate paybacks in the form of cost reductions.

However, the price signals that result from the current structure of the UK’s household gas and electricity tariffs do nothing to encourage demand reductions – in fact they embody rewards for consuming more, since on average, the more we use, the less we pay per unit of consumption. This has negative environmental and social consequences, since (1) the marginal cost of producing more carbon emissions reduces as consumption increases, even though the environmental cost of that activity does not reduce, and (2) those who can only afford to buy less end up paying more per unit of consumption, which augments the existing income disparities underpinning fuel poverty.

This is the context in which this report was commissioned, as part of WWF-UK’s work to reduce the negative environmental impacts of the energy and water industries, and its campaign to reduce the impacts of UK homes and lifestyles.

assets.wwf.org.uk/downloads/energy_tariffs_report_1.pdf
.
.
.
Posted by Jeremy Woodward at 14:28