CCTV 'to catch criminals and protect vulnerable citizens' ... And yet, 'Sidmouth has the lowest figures of actual crime, but the highest fear of crime anywhere in the UK.'

The Herald reports on proposals to extend the CCTV coverage in Sidmouth: 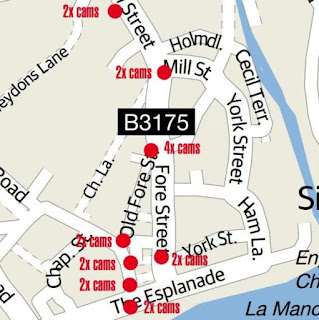 Sidmouth’s police sergeant has launched a new bid for a town-wide CCTV system – to catch criminals and protect vulnerable citizens.

A new thread has appeared on StreetLife on the issue - which has provoked heated debate, including this observation:

Sidmouth has the lowest figures of actual crime, but the highest fear of crime anywhere in the UK.

So, is crime rising in Sidmouth and if so, how can it be tackled?

At every Town Council meeting, the police report on the latest crime figures:

171: Police Report Sgt Andy Squires presented the police report for February 2016 which showed a total of 27 incidents compared to 24 incidents in February 2015.

159: Police Report PC Simon Blyth presented the police report for January 2016 which showed a total of 27 incidents compared to 32 incidents in January 2015. He reported that there had been a 300% increase in criminal damage due to the spate of graffiti in the Stowford area and damage to the Blackmore Gardens conservatory.

143: Police Report Sgt Andy Squires presented the police report for December 2015 which showed a total of 32 incidents compared to 29 incidents in December 2014.

In other words, crime seems to have been pretty stable:
Crime map for Sidmouth, Devon & Cornwall Police - Police.uk

Despite a spate of graffiti of late:
Sidmouth police vow to catch vandals after graffiti spree - News - Sidmouth Herald

CRIME RATES IN EAST DEVON AND THE WEST COUNTRY

In Honiton, the figures have been going down (27th March 2016):
Encouraging’ signs as Honiton crime numbers tumble - News - Midweek Herald

In Devon and Cornwall, the crime rates have also remained the same:
UKCrimeStats.com - Devon

CRIME RATES IN THE UK

However, national statistics just out suggest a rise in crime:
Crime soars 107% as cyber offences included for the first time - as it happened - Telegraph
Violent crime jumps 27 per cent in new figures - Telegraph

Although much of the increase is blue-collar:
Millions of Brits fall victim to fraud and cyber crime in just one year - Mirror Online

And seems to be directed at particular populations:
Homophobic Crimes Up Nearly 20 Per Cent In London | The Gay UK

What's particularly worrying for Sidmouth is that older women seem to be a target but as always, the picture is more nuanced - see highlighted points:

A steady seven-year decline in serious violent crime in England and Wales has come to an end with a significant increase in attacks against people aged over 50, particularly women, according to new hospital data.

Returns from 91 hospital emergency departments, minor injury units and walk-in centres show that 210,215 people needed treatment after being violently attacked in the 12 months to September 2015.

Attacks on women over 50 appear to have soared by 20% from 5,156 in 2014 to 6,165 in 2015, according to the hospital data, and though the researchers say the figures are reliable, they have little idea why more attacks on older women are happening.

The authors of the annual study by the violence research group at Cardiff University said that after successive annual falls in the number treated for violent crime injuries in England and Wales, this is the first time since 2008 that the data has shown little change.

“It is possible that the long steady decline in violence in England and Wales has come to an end,” said Prof Jonathan Shepherd, one of the study’s authors. The study points out that the 210,215 people needing hospital treatment after being attacked last year is 102,818 fewer than in 2010.

The findings precede Thursday’s publication of the official annual crime figures for 2015 by the Office for National Statistics. The results are consistent with the Crime Survey for England and Wales, which shows little change in the violent crime rate over the same period.They are, however, at odds with police recorded crime data, which showed a 27% increase in incidents involving violence against the person in the 12 months to September 2015, including a 16% rise in the sub-category of violence with injury.

The Cardiff academics say the police figures should be regarded as unreliable because of the large impact of changes in police recording practices and trends in reporting.

As further evidence of the unreliability of police figures, they cite research showing that the installation of CCTV camera systems leads to an 11% rise in police recording of violence but a 3% fall in the numbers getting hospital treatment after being violently attacked.

Shepherd said cuts in funding for CCTV monitoring systems and crime analysis could be one reason why the fall in violent crime has levelled off.

“Potential explanations for this trajectory include disinvestment by local authorities and police forces in real-time CCTV monitoring and in crime analysis – often considered to be a back-room function,” he said.

“Public health practitioners and policymakers responsible for tackling community violence in England and Wales need to take note, and consider refreshing current violence prevention initiatives, especially if trends in 2016 are similar. The modern crime prevention strategy, published in March 2016, is welcome from this perspective,” he added.

While the study shows no significant change in the number of violent crime victims receiving hospital treatment, it does show strong variations in the violent injury rates among different age groups.

The most likely victims remain younger men aged between 18 and 30 because of higher levels of alcohol consumption, the need to establish a strong masculine identity and the fact that they are the group most likely to be walking home alone late at night. The number of victims in this age group fell by 4% last year.

The research also provides the only national measure of the number of children under the age of 10 who have been victims of violent crime. The latest figures show that their injury rate fell by a further 9% last year after an 18% decrease in 2014.

The study also confirms that serious violent crime peaks at weekends and in May, August and December.

This raises several issues: the perception of crime, the effectiveness of CCTV and the reliability of statistics:

From a couple of years ago:

The last ONS national well-being survey showed that only 56% of women feel "fairly or very" safe walking alone after dark – the same proportion as five years ago – despite the fall in crime rate.

New forms of crime – whether it is online fraud or official recognition of different kinds of domestic abuse – will continue to emerge that the official stats do not necessary capture but that does not negate the fundamental underlying trend.

From Pulman's View from Sidmouth this month:

Julia Mulligan, chair of the NRCN, said: "The full scale of crime in rural areas has never before been assessed.

"Whilst official figures show rural crime, like crime in general, is decreasing, we are concerned about the wider implications on people and communities."

It does seem that the older we get, the more we fear crime:
The changing shape of fear as we age – Cognitive Daily
Fear of crime: A report on available research | OSPO

The BMJ has just published a report which questions the usefulness of CCTV:
Effect of urban closed circuit television on assault injury and violence detection -- Sivarajasingam et al. 9 (4): 312 -- Injury Prevention

This is another valuable report:

Conclusions about effectiveness that can be cautiously drawn are:

Finally, you should consider the impact of a CCTV system from a societal view. It has been suggested that ever-increasing surveillance can make the local environment a less pleasant place to live62. Of course, it may also reduce fear of crime and increase public participation in public space. This may be an acceptable benefit from the ongoing costs of a CCTV scheme.
Center for Problem-Oriented Policing | Response Guides | Video Surveillance of Public Places

And there are lies, damned lies and statistics:

Tim Harford
We have more data — and the tools to analyse and share them — than ever before. So why is the truth so hard to pin down?

Consider a widely shared list of homicide “statistics” attributed to the “Crime Statistics Bureau — San Francisco”, asserting that 81 per cent of white homicide victims were killed by “blacks”. It takes little effort to establish that the Crime Statistics Bureau of San Francisco does not exist, and not much more digging to discover that the data are utterly false. Most murder victims in the United States are killed by people of their own race; the FBI’s crime statistics from 2014 suggest that more than 80 per cent of white murder victims were killed by other white people.

Donald Trump on the campaign trail, and the false statistics he retweeted
Somebody, somewhere, invented the image in the hope that it would spread, and spread it did, helped by a tweet from Donald Trump, the current frontrunner for the Republican presidential nomination, that was retweeted more than 8,000 times. One can only speculate as to why Trump lent his megaphone to bogus statistics, but when challenged on Fox News by the political commentator Bill O’Reilly, he replied, “Hey, Bill, Bill, am I gonna check every statistic?”
Harry Frankfurt’s description of the bullshitter would seem to fit Trump perfectly: “He does not care whether the things he says describe reality correctly.”

How politicians poisoned statistics - FT.com
.
.
.
Posted by Jeremy Woodward at 15:44