Sidmouth's ageing population: "Without urgent investment in coastal communities, some areas will struggle to retain the working age families needed to fuel the economies of towns dominated by old people’s homes."

Sidmouth is in the top 10 seaside towns with an ageing population - and that will have serious consequences for long-term health and care facilities - issues to be discussed in a fortnight's time in the town:
Futures Forum: The future of health services and how they will affect Sidmouth: meeting at Stowford Rise Community Centre.... Tuesday 11th November

It's very much a question of lack of affordable housing - which means a lack of young families:
Futures Forum: Identifying housing 'need' in the West Country.................. ..... "Broken Market, Broken Dreams"

This is from today's Financial Times:

Clacton-on-Sea, Essex, constituency of Ukip's first MP, Duncan Carswell
Coastal communities in England and Wales tend to be older, sicker, less diverse and more economically insecure than the rest of the country, according to an analysis of official data published on Tuesday.
Examining the most recent census data for 273 “built-up areas” on the coast, the Office for National Statistics found that a fifth of those living in these communities were aged 65 or over, compared with 16 per cent for England and Wales as a whole.
Moreover, the under-65s in these areas were more likely to report a long-term health problem that limited daily activities “a lot” – 7 per cent compared with a national average of 5.7 per cent.

In a 2013 report the Centre for Social Justice, a think-tank founded by Iain Duncan Smith, the current secretary of state for work and pensions, said some coastal towns were trapped in a cycle of poverty.
The report argues that as cheaper foreign travel undermined the appeal of Britain’s seaside resorts, former tourist accommodation was turned into low-income housing that authorities are using as “dumping grounds” for those such as drug addicts, the mentally ill and children too old to be in state care.
Others choose to live in such areas. “There’s a long history of people with additional health needs seeking curatives at the coast,” said Wendy Maples, a senior lecturer at the Open University who worked on the BBC documentary series Coast.
The ONS found in its analysis, which used 2011 census data, that coastal communities tended to have a lower rate of employment and a higher rate of part-time work. There were also fewer immigrants than elsewhere: the number of recent arrivals not born in the UK was significantly lower than England and Wales as a whole, and a much higher than average proportion identified themselves as ethnically white.
In Britain, attention has shifted to deprivation in coastal towns as bigger cities perform relatively well economically. In 2011, the government established a coastal communities fund to help boost local economies, and a government post of minister for coastal communities was created in July.
Ofsted, the education regulator, has warned that the most disadvantaged children in Britain are in coastal towns and rural parts of the country. It has proposed a corps of “National Service Teachers” to work in unfashionable areas that have felt less impact from national initiatives.
England’s coastal towns and cities have been fertile territory for the anti-EU UK Independence party, which has spread its appeal from the southeast coast – mainly in Kent – as far north as Sunderland, where it came second to Labour in this year’s local elections with nearly a quarter of the votes.
Ukip’s most likely parliamentary victories are along the east coast of England, especially South Thanet, the Kent seat that party leader Nigel Farage has chosen to fight next year.
Analysis by Robert Ford and Matthew Goodwin, academics who have charted the rise of Ukip, shows it is likely to do well in a handful of former mining, fishing and port towns along the east coast.
. . .

And this is from today's Daily Mail:

By MATT CHORLEY, POLITICAL EDITOR FOR MAILONLINE
PUBLISHED: 11:14, 28 October 2014 | UPDATED: 17:36, 28 October 2014
More than a third of people in some of the country’s best-loved seaside resorts are over-65, leaving them struggling to survive without an influx of young people, new figures revealed today.
In one town, Southwold in Suffolk, half of people are now retired, according to a new study by the Office for National Statistics.
MPs warned that without urgent investment in the 270 coastal communities in England and Wales some areas will struggle to retain the working age families needed to fuel the economies of towns dominated by old people’s homes. 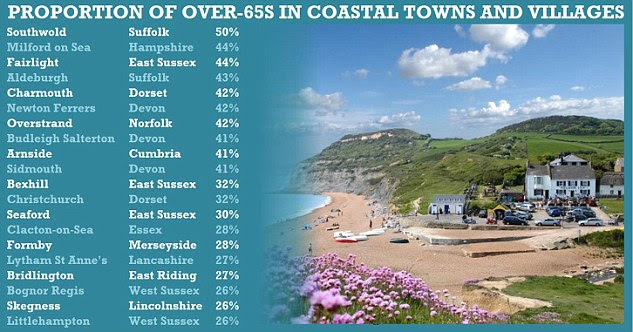 +4
The new census of coastal communities shows that on average 20 per cent of people living in them are aged 65 or over, compared to 16 per nationwide.
However, a detailed breakdown reveals that in places like Milford on Sea in Hampshire, Fairlight in East Sussex, Sidmouth in Devon and Charmouth in Dorset the figure is more than 40 per cent and it is over 30 per cenrt in Bexhill in East Sussex and Christchurch in Dorset.
The ONS said the data confirms the widely-held perception that ‘older people are more likely to live by the coast’.
‘In general, the smaller the coastal community the higher the share of population aged 65 or over, with the share rising from a 17 per cent average among the large coastal communities to a 25 per cent average among the small coastal communities.’
It also means there are fewer children: just 17 per cent in coastal towns are aged 0-15, compared to 19 per cent for England and Wales overall.
It means that 8 out of the 10 areas with the highest average age in the whole country are by the sea.
In 2011, some 6.2million people lived in a coastal communities, including 2.2 million who lived within the 12 largest. It means that 11 per cent of people live by the sea.
While people choose to move to the seaside in their retirement, it can mean areas struggle to cope with increased demand on health and social care services.
Some 7 per cent of people in coastal areas have a long-term health problem that means day to day activities were ‘limited a lot’, compared to 5.7 per cent of people nationwide. 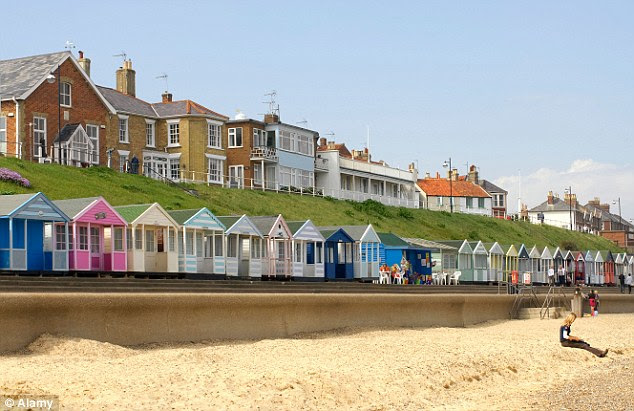 +4
Half of people in Southwold in Suffolk are aged over 65, the highest proportion of any seaside town in the country

Torbay MP Adrian Sanders, a member of the all-party group for coastal communities, said
‘Clearly there are increased social costs of being migratory places for retired people. At the moment when they move into an area they are at the top of their earnings capacity, but then they dip into savings.’
He warned that many areas councils have agreed large numbers of developments for gated retirement blocks and old people’s homes.
‘We need to retain more of the working age, skilled people. A lot of it comes down to the housing policy. If you don’t build in order to secure enough affordable housing for working age people on low wages the only people who will invest will be the likes of McCarthy and Stone.
‘With the best will in the world pensioners aren’t the kind of people who are going to be going out and buying new furniture and renovating their properties. It is younger, working-age people who go out and spend money on those things. 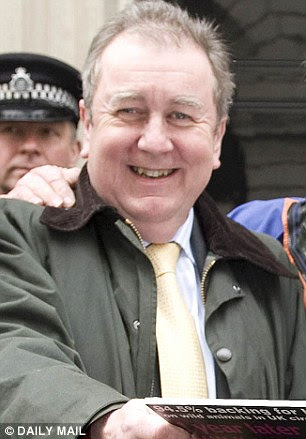 +4
Torbay MP Adrian Sanders said more needed to be done to retain skilled, working age people in coastal towns
He said a major problem was that people pay into council tax funds where they spend their working lives, but when they move to the seaside it is the coastal councils who have to pick up the social care bill.
He warned that the money given to coastal towns was ‘miniscule’ compared to other regional growth funding.
Mr Sanders insisted that there are also positives to having more retired people, who are ‘really helpful at running community groups and charities’ and acting as councillors or school governors. ‘They help to build stronger communities,’ he added.
The ONS data also shows how coastal communities differ from the rest of the country.
More than 95 per cent of people living by the coast are white, compared to 86 per cent in England and Wales.
Over half the coastal communities had in excess of 98 per cent of population with white ethnicity, the ONS said.
People are more likely to live in rented homes at the seaside. Some 19 per cent of families are in rented properties, compared to 15 per cent across the country.
There are also more empty homes. The census in 2011 found 1.1 million houses which were not occupied by usual residents.
These include holiday homes or apartments and properties with short-term residents.
In England and Wales in 2011, 4.4 per cent of household spaces were unoccupied by usual residents.
The average was the same for large coastal communities, slightly higher (5.5 per cent) for medium sized coastal communities but higher (10.5 per cent) in small coastal communities.
Overall, across all coastal communities in this report the average was 6.1 per cent.
In Southwold in Suffolk and Salcombe in Devon, half of homes were not lived in full-time.

The Helpage Charity Shows How Fast World'S Population Is Ageing - YouTube
.
.
.
Posted by Jeremy Woodward at 13:36