Brexit: and the future for climate change >>> >>> >>> >>> anti-intellectualism and inter-generational theft

The new Prime Minister has shuffled her ministries around a little - which has raised questions as to whether this move will be good for the climate or not:
Futures Forum: Climate change: and goodbye to the Department of Energy and Climate Change

Meanwhile, how do scientists see the impact of Brexit?
Futures Forum: Brexit: and Exeter University

This is the take from the science journal Nature: 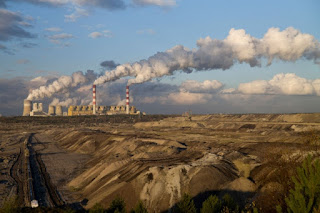 The Belchatow coal power plant in Poland: many eastern EU countries may be reluctant to take on extra emissions cuts after Brexit.

The European Union's climate-change agenda could lose momentum as a result of the bloc's split with the United Kingdom, policy experts say.

Wrangling over the terms of Brexit seems likely to delay the EU’s ratification of the Paris climate agreement, which aims to stabilize greenhouse-gas emissions, says Oliver Geden, head of the EU Research Division at the German Institute for International and Security Affairs in Berlin. “Brexit might be an excuse for some EU countries to withhold their signature,” he says.

And because the United Kingdom has long been a proponent of strong climate policies within the EU bloc, the departure could strengthen the position of European countries that are reluctant to take forceful climate action.

“The UK not being part of the negotiating mix means there is likely to be less pressure for ambitious targets and ensuring that the EU delivers on its Paris agreement commitments,” says Martin Nesbit, a policy expert at the Institute for European Environmental Policy in London.

Before the Paris talks, the EU had pledged to cut its greenhouse-gas emissions by at least 40% by 2030, relative to 1990 levels. As part of that pledge, industries participating in the EU’s emissions trading system were to reduce emissions by 43%, and other sectors — such as transport, agriculture and construction — were to achieve a 30% cut (both relative to 2005 levels).

The latter target is most exposed to Brexit. Last week, the European Commission proposed the amount by which each of its 28 member states — including the United Kingdom — should cut 2005 emissions domestically by 2030, depending on individual states’ economic strength and potential to reduce emissions. The proposals, which member states and the European parliament are yet to approve, range from 0% for Bulgaria to 40% for Luxembourg and Sweden.

The United Kingdom has been given a 37% reduction target; once it quits the EU, its extra 7% will have to be divided between the remaining countries to keep the bloc on track.

The Blue and Green blog is much more upbeat about the future:

The creation of new departments and sectors are said to represent new openings for Britain.

“There are understandable concerns about the abolition of DECC and its merger into a new department, and I hope that energy won’t be an afterthought in BEIS,” he said. “But in reality I think that there is a recognition across Government now that we have a massive opportunity with the low-carbon transition.

Renewable energy is a huge opportunity for the Government

“Energy storage and demand-side response are key to really unlocking their potential. We should stop seeing these as ‘green’ technologies, but simply as an industrial, economic and technological opportunity for UK Plc.”

James Heappey was speaking at an event in Westminster on the implications of Brexit for energy policy in the UK. Speaking at the same event, Professor Jim Watson, Director of the UK Energy Research Centre (UKERC), said that ‘time will tell’ whether energy and climate change policy becomes more firmly integrated with wider industrial strategy.

“The merger of the Department of Energy and Climate Change with the Department of Business has divided opinion. Some people see opportunities to integrate energy and climate policy more firmly with wider industrial strategy, while others are concerned over an apparent downgrading of climate change as a policy priority,” he said. “Time will tell which view is correct, but three points are worth noting. Firstly, the merger does not mean that the clock is being turned back to the days when Government neither viewed energy as a priority, nor when energy and climate issues were split across different departments.

“Secondly, the low-carbon transition in the UK, as mandated by the Climate Change Act, is now well under way. Progress is being made, though there is an increasing gap between climate targets and policy action. And thirdly, the new ministerial team at BEIS have long-term knowledge and experience of why this transition is important.

“A significant uncertainty, however, is the nature of the UK’s future relationship with the European Union and other countries. But the UK has historically been a leader in both tackling climate change and in liberalising energy markets. As negotiations with the EU get underway, it will be important to maintain a strong focus on reducing emissions whilst identifying opportunities for UK-based firms to benefit from the energy transition”

Hugo Chandler, Director at New Resource Partners who formerly led work on grid integration of renewables at the International Energy Agency, said that the UK, along with other nations, was committed to developing a flexible, smart power grid.

“Before the referendum, the UK had made some good first moves towards the kind of flexible grid that can manage the 12GW of offshore wind in the pipeline. Whether in the EU or out, this direction of travel remains sound. Transition to a flexible grid is the logical thing to do, and with present technology it’s the only route to addressing the energy trilemma of clean, affordable, secure energy supply,” he said.

“Britain isn’t alone in this transition: most other major developed economies are pursuing smart power infrastructure such as interconnection, demand response, storage and flexible power plants. And it remains in our neighbours’ interests to collaborate in gas and power. Major players from the big utilities to Energy UK and the National Infrastructure Commission are all pointing in the same direction. The right thing to do for the new business department is to continue on its course, and indeed to entrench it firmly in our overall industrial strategy.”

On the other hand, the Guardian saw it as 'inter-generational theft':

The inter-generational theft of Brexit and climate change

In last week’s Brexit vote results, there was a tremendous divide between age groups. 73% of voters under the age of 25 voted to remain in the EU, while about 58% over the age of 45 voted to leave. 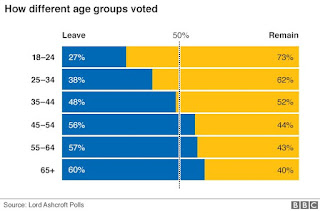 This generational gap is among the many parallels between Brexit and climate change. A 2014 poll found that 74% of Americans under the age of 30 support government policies to cut carbon pollution, as compared to just 58% of respondents over the age of 40, and 52% over the age of 65.
Inter-generational theft

The problem is of course that younger generations will have to live with the consequences of the decisions we make today for much longer than older generations. Older generations in developed countries prospered as a result of the burning of fossil fuels for seemingly cheap energy.

However, we’ve already reached the point where even contrarian economists agree, any further global warming we experience will be detrimental for the global economy. For poorer countries, we passed that point decades ago. A new paper examining climate costs and fossil fuel industry profits for the years 2008–2012 found:

For all companies and all years, the economic cost to society of their CO2 emissions was greater than their after‐tax profit, with the single exception of Exxon Mobil in 2008

For much of the time during which developed nations experienced strong economic growth as a result of fossil fuel consumption, we were unaware of the associated climate costs. We can no longer use ignorance as an excuse. And yet the older generations, who experienced the greatest net benefit from carbon pollution, are now the least supportive of taking responsibility to pay for it. The longer we delay, the more devastating the consequences will be for the younger generations.

Similarly, today’s youth who are early in their career paths will face the harshest consequences of the Brexit vote that was dominated by older voters. As Jack Lennard put it:

And as political journalist Nicholas Barrett said in a comment that subsequently went viral:

the younger generation has lost the right to live and work in 27 other countries. We will never know the full extent of the lost opportunities, friendships, marriages and experiences we will be denied. Freedom of movement was taken away by our parents, uncles, and grandparents in a parting blow to a generation that was already drowning in the debts of our predecessors.

Thirdly and perhaps most significantly, we now live in a post-factual democracy.

A dangerous strain of anti-intellectualism

As Barrett noted, during the Brexit campaign, facts seemed useless against the myths propagated by the Leave side. Indeed, Nigel Farage, leader of the right-wing UK Independence Party and Leave campaign has already admitted the key claim that £350 million weekly saving in EU contributions could be spent on health services was utter nonsense – a “mistake,” as he put it. A “mistake” that was conveniently admitted just hours after Brexit votes had been cast and counted.

When asked to name a single economist who backed Brexit, justice secretary and another top Leave campaigner Michael Gove said “people in this country have had enough of experts” and later likened those experts to Nazis.

Climate denial is based on a similar strain of anti-intellectualism and preponderance of baseless myths. When faced with the reality of a 97% expert consensus on human-caused global warming, many will deny that reality, propagate a number of associated myths, or like Gove, find an excuse to disregard expert opinion and evidence (e.g. by arguing that scientific consensus ‘has been wrong before’).

Ultimately it boils down to ideological biases. When the facts and expert conclusions contradict our beliefs, people will often find an excuse to dismiss the evidence and experts. It’s perhaps unsurprising that as DeSmogUK revealed, Gove and many other Leave campaign backers are also climate contrarians.

Experts warned of the dangerous consequences that would result from Brexit, but the majority of older voters chose to ignore those risks. Prudent risk management was trumped by ideology, and today’s youth will have to bear the brunt of the consequences.

Climate change similarly poses tremendous long-term risks, particularly to younger generations. The UK has thus far been a leader in mitigating those risks, but with the EU exit and potential installment of right-wing climate-denying political leaders, that leadership may be in jeopardy, and the EU’s climate pledges may be compromised.

Americans have similarly failed to adequately manage political and climate risks. One of the two dominant US political parties obstructs all efforts to curb carbon pollution, and has also nominated Donald Trump for president: the embodiment of risky behavior.

It now falls to the US to do better than the UK. Risk management and the well-being of future generations must trump ideology and fear in the November elections. We simply can’t afford two of the world’s superpowers being dictated by populism and xenophobia at the expense of our youth’s future.


The inter-generational theft of Brexit and climate change | Dana Nuccitelli | Environment | The Guardian
.
.
.
Posted by Jeremy Woodward at 09:05