Singapore is seen as a global power-house to relocate to:
Futures Forum: Brexit: and the Singapore model

It also has its fair share of environmental issues:
Futures Forum: Singapore smog and palm oil

We don't normally associate 'greenery' with the city state: 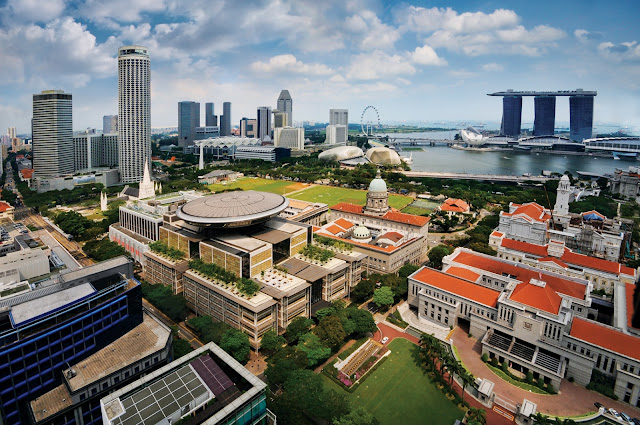 But there have been some wonderful projects to green the place:
Futures Forum: Plans for Port Royal: British design in Singapore
Futures Forum: Planet Earth II >>> "Can humans choose to build cities that are homes for both them and wildlife?"

One idea catching on everywhere is that of the 'green corridor':
Futures Forum: Green Corridors

And it's happening in Singapore:

I’m a big fan of urban walking, and Singapore – being the urban planning masters that they are – are planning to create one of the world’s greatest walks along a former railway.

Singapore and Kuala Lumpur were once connected by a direct railway, which ran from Keppel Road near Downtown Singapore to the Kuala Lumpur Station. I took this train from Singapore in 2009, and it was a pleasant alternative to taking the bus. The railway was closed in 2011, and the service was replaced with a cross-bridge shuttle service at Woodlands Train Checkpoint near the border.

While there once was a railway in Singapore, it was never Singapore’s railway. The land and tracks were owned by Malaysian Railways KTM, and Malaysia had partial sovereignty over this land (which was a sticking point for Singapore). After a land-swap deal the railway reserve has since returned as Singapore land.

There is a plan for a new high-speed railway that will connect KL to Singapore, but the terminal station will be in Jurong East. Thus the 24km railway reserve that runs north to south across the country will never again be used as a railway.

Personally I would have preferred to still have a railway station closer to the city centre, but at least Singapore have made good use of the land, with the rail corridor now being a national park.

With the official PR video here: