The New Economics Foundation has been busy of late with initiatives:
Futures Forum: Britain needs a green new deal
Futures Forum: "The shorter working week is fast becoming one of the major political issues"

Here it puts forward a project to give us a universal income:

Alfie Stirling wrote for iNews about NEF’s new proposal to scrap the personal tax allowance, and replace it with a cash payment of £48 a week.

“At a cost well in excess of £100 billion per year in foregone tax receipts – more than the departments for defence, local government and transport combined – next year the personal allowance is expected to be worth around £6,500 in lower tax for the richest 10 per cent of households, compared with just £600 for the poorest 10 per cent.”


The story has also been taken up by the media, reporting on the political traction it's gaining:
Axe personal allowance and pay everyone £48 a week, says thinktank | Politics | The Guardian

Here the full piece in the i-newspaper earlier today:


The personal income tax allowance is billed as a way of supporting people on low incomes. It could hardly be further from the truth

On 1 April 2019, the Government will complete one of the most expensive and regressive public spending projects of the 21st century so far: a decade-long expansion of the personal allowance of income tax.

Designed to protect people’s initial income from tax, the policy is often billed as a way of supporting people on low incomes. The spin is highly effective, but it could hardly be further from the truth.

‘The personal allowance is expected to be worth around £6,500 in lower tax for the richest 10 per cent of households, compared with just £600 for the poorest 10 per cent’

At a cost well in excess of £100 billion per year in foregone tax receipts – more than the departments for defence, local government and transport combined – next year the personal allowance is expected to be worth around £6,500 in lower tax for the richest 10 per cent of households, compared with just £600 for the poorest 10 per cent.

Who benefits from the personal allowance

But perhaps most importantly of all, the personal allowance is worth double for the 13 per cent of highest income adults. This is because the higher rate threshold – the level beyond which additional income gets taxed at a rate of 40 per cent and set at £50,000 for the 2019/20 financial year – rises pound-for-pound automatically with any increase in the personal allowance. This increases the amount of top incomes taxed at 20 per cent rather than 40 per cent.

This ‘welfare for richest’ has been expanded just as billions of pounds have been cut from UK’s threadbare social security system. Many of our lowest income families have seen their welfare payments eaten away by inflation for four years, and child payments scrapped entirely for third and subsequent offspring.

With recessionary threats looming, from a Brexit ‘no deal’ to Chinese stock markets, the UK’s worn-out safety net should be a cause for serious concern for economists and politicians alike.

All this begs a question: could the colossal sum of spending on the personal allowance be put to fairer and more effective use? At the New Economics Foundation, we have launched a new proposal to do precisely that. In a new report published today, we recommend abolishing the personal allowance and replacing it with a new payment equal to the tax that would otherwise be paid on the first £12,500 in income, around £48 per week in the UK outside of Scotland.

We combine this new payment with an increase in child benefit that reverses the real terms cuts seen since 2010, to create a new Weekly National Allowance paid to almost every adult in the UK.

How the new payment would be administered

This new payment could be administered by HMRC and made payable to every adult over the age of 18 with a national insurance number and total annual income less than £125,000 – since those earning above £125,000 do not have a personal allowance in the current system, they would also not receive the new payment.

The weekly sum would be entirely tax-free, but it would be scored in the means testing of other benefits – such as universal credit and pension credit – on the same basis as the untaxed earnings it would otherwise be replacing.

The most important effects of the proposal are threefold. First, it would be highly redistributive. Those earning above the higher rate threshold would pay a little more in tax than they receive back in new payments, and this would fund the Weekly National Allowance paid to all those with incomes below £12,500. Overall, the poorest 10 per cent of households would see their disposable income increase by around £1,200 per year, lifting around 200,000 families out of poverty. Meanwhile, the richest 10 per cent would contribute around £40 per week extra in tax.

Second, the proposal is entirely self-funding. The savings made from abolishing the personal allowance, as well as reduced spending on means-tested benefits driven by the boost in disposable incomes for the poorest, cover the full costs of the new weekly payment and the increase to child benefit.

A new guaranteed minimum income for a recession

Third, the policy significantly improves the UK’s recession-fighting toolkit. Because the new money would be retained by everyone whether in or out of work, it would provide a new guaranteed minimum income during recession. The Government could also increase the allowance temporarily during a recession if required, helping to maintain spending and livelihoods and aiding economic recovery.

At this week’s Spring Statement, the Chancellor Philip Hammond will likely remind us again that April will mark the completion of the Conservative flagship manifesto commitment to increase the personal allowance to £12,500. He will likely describe it as a victory for the UK’s working poor.

When he does this, we would do well to remember who is truly benefiting from the Government’s handout, how much it is costing society and the alternatives that can and should be explored.

Alfie Stirling is Head of Economics at the New Economics Foundation

And here's the full set of proposals on the NEF's website:

REPLACING THE PERSONAL TAX ALLOWANCE WITH A WEEKLY NATIONAL ALLOWANCE

On 1 April 2019, the government will complete one of the most expensive and regressive public spending projects of the 21st century so far: a decade-long expansion of the personal allowance of income tax. The personal allowance will rise to £12,500, protecting personal incomes from the basic rate of tax – and in some cases the higher rate of tax as well. Her Majesty’s Revenues and Customs (HMRC) estimate the scheme to be worth an eye watering £107 billion in forgone tax receipts for the 2018/​19 tax year alone: equivalent to 14% of total government income and worth more than the departments for defence, local government and transport combined. This cost is set to rise further in 2019/​20 with the increase in the threshold. New NEF modelling also shows that the allowance is worth significantly more for higher income households. In 2019/​20, the allowance will be worth £6,500 in reduced tax liabilities for the 10% highest income families, but worth just £600 for the poorest 10%’.

New giveaways to the UK’s highest income households in the tax system have coincided with social security reforms that have hit the poorest families hardest. Significant reductions to disposable income for the UK’s poorest families have been driven by large-scale cuts such as the working age benefit freeze and the two child limit to payments under working tax credits, housing benefit and universal credit. The flagship transition to universal credit itself is also failing. Its implementation has been incompetent, flawed and harmful. And its design is internally incoherent given its own stated objectives of increasing simplicity, reducing costs and improving work incentives. Yet despite consensus growing over the scale of failings in universal credit and the lack of resources in the social security system as a whole, too little work has been done on how to structurally improve the UK’s safety net in a fundamental way.

A weakened and threadbare social security system also represents heightened risk to the economy as a whole. Monetary policy – altering the cost of credit in the economy – is becoming increasingly ineffective as a recession fighting tool. At the same time, the future response from discretionary fiscal policy – actively changing tax and spending – is uncertain given continued ill-judged government commitments to austerity. Social security would normally be a first line of defence during economic downturn, maintaining a minimum level of spending in the economy even if unemployment starts to rise. But, given the lack of prospect for monetary or fiscal interventions, at the next recession there is a danger it may be among the last lines of defence as well. With the risk of a no deal Brexit growing, the need to ensure social security has the strength, breadth and generosity to help the economy navigate the next recession safely is now an urgent priority.

The main contribution of this policy paper is the proposal that government should create a ​‘Weekly National Allowance’ by repurposing resources currently foregone every year through the personal allowance of income tax. We posit that this reform is both implementable on a relatively short-time frame, but nonetheless capable of meaningfully improving the progressivity of the UK’s tax and benefit system as a whole. It also has the potential to significantly expand the country’s recession fighting toolkit. However, the policy is not intended as a silver bullet to meet all, or even most, of the UK’s short and long-term challenges with respect to tax and social security. We therefore present this proposal as one brick in the road to a radically reformed system as a whole

The two pillars of a Weekly National Allowance would be:

This cost-neural and easily implementable policy swap would be highly distributive, lifting 200,000 families out of poverty and shift the £8bn currently spent on tax allowances for the 35% highest income families to the remaining 65% of families. It would also would significantly improve the UK’s recession fighting toolkit.

This brief policy paper marks the first in a broader programme of work being conducted at NEF over the coming months and years, which will examine personal tax allowances, social security and public service provision as three closely interrelated schemes. As part of this work we plan to make a number of cross-cutting recommendations for government to evolve and strengthen the UK’s social insurance and security systems to meet the challenges of the 21st century. This paper and it’s recommendations are therefore not intended as the final word and we hope it instigates further debate.
DOWNLOAD THE REPORT 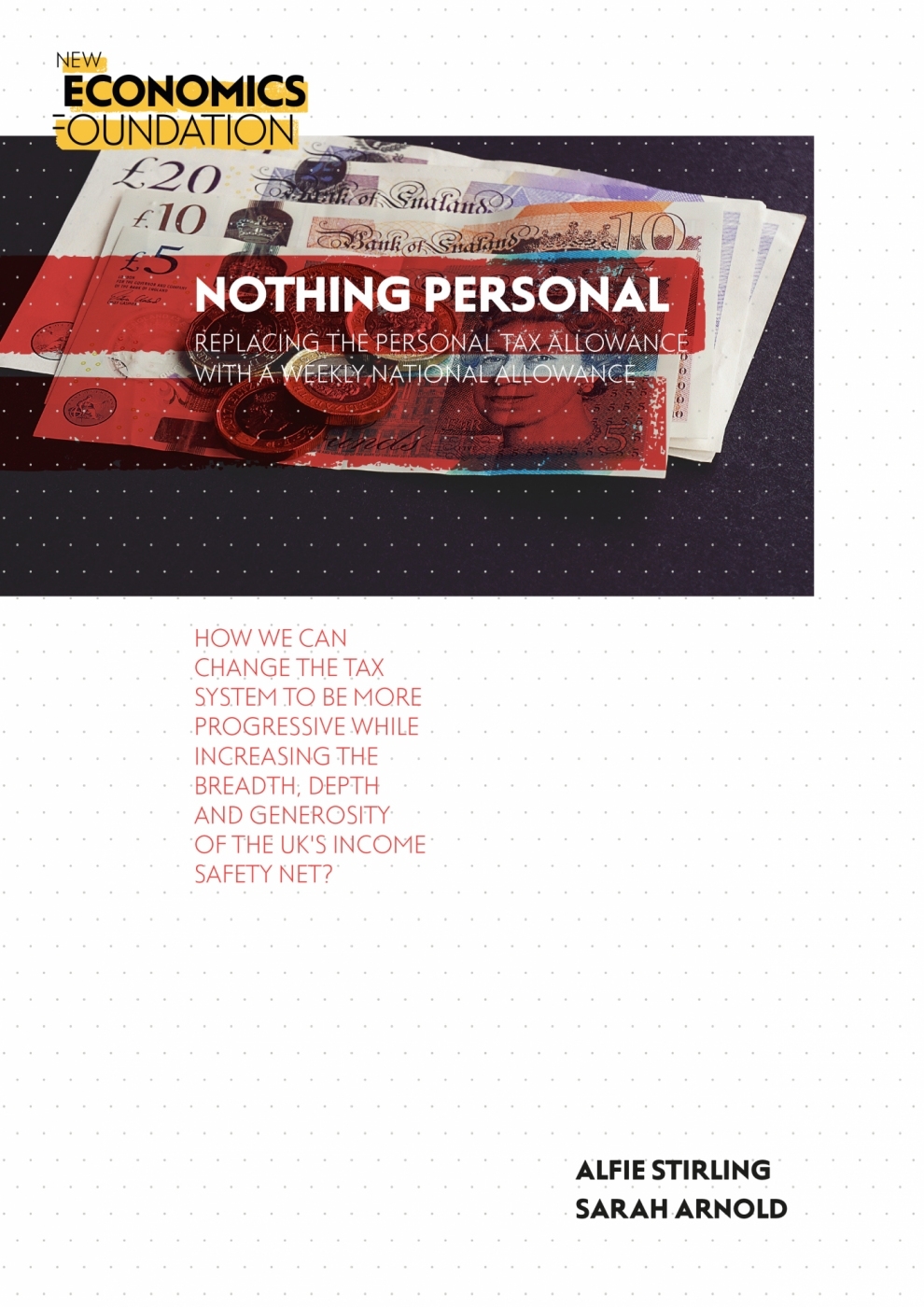 Nothing personal | New Economics Foundation
.
.
.
Posted by Jeremy Woodward at 16:14