Some decades ago, there was the real promise of a shorter working week - which never materialised:
Futures Forum: How can we explain the unfulfilled promises of 1968? And how might they be fulfilled?

As the New Economics Foundation notes: 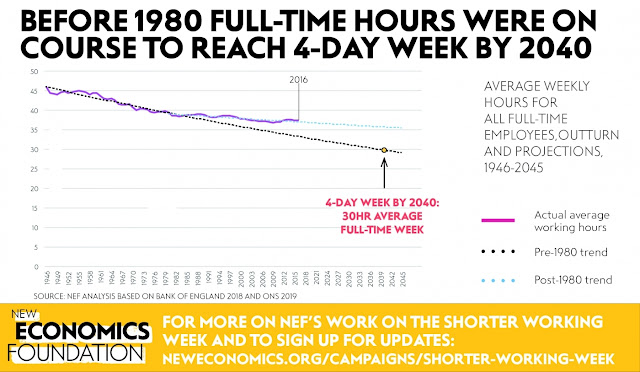 The UK would have been on target to reach a 30-hour-week (equivalent to a 4-day week relative to 2016) by 2040 had average hours continued to fall after 1980 in line with the initial post-war trend, according to new forecast modelling published by the New Economics Foundation (NEF) today.

The shorter working week has always been at the heart of the labour movement. The 8-Hour Movement extended beyond borders and ensured that today we enjoy things like the weekend and the eight-hour day. After decades in the political wilderness, the shorter working week is fast becoming one of the major political issues across Europe. The European Network for the Fair Sharing of Working Time represents an attempt to coordinate the efforts of the trade unions, political parties, and civil society actors across Europe.

We'll plot the most exciting developments on this map and publish the network's newsletter every two months.

This is all part of the NEF's longstanding campaign:

There is no natural law determining the amount of time we spend in work. History shows us that when people come together they can reduce the working week in order to provide more time for life – indeed that was how the weekend and the eight-hour day was won.

Today, arguments around reducing working time have come roaring back. Winning shorter working hours without a loss in pay offers a way to tackle symptoms of overwork, providing people with more time to recuperate, participate in democratic process and fulfil caring responsibilities.

Automation and climate change have injected the debate with a new urgency. Automation could and should bring gains for workers, as it can eliminate work that is dull and repetitive, as well as increase productivity. A well-planned transition would see all workers given the opportunity to shorten their working time without reducing their material quality of life.

We are pleased to be part of an alliance building a new consensus that more free time is an ambition to bake into the rules of the economy – working with trade unions, researchers and campaigners in the UK and across Europe.