The application was overwhelming rejected:
Say NO to Sidford Business Park - Home | Facebook

Next week sees a further opportunity for discussion - organised by the campaign group 'Say NO to Sidford Business Park: 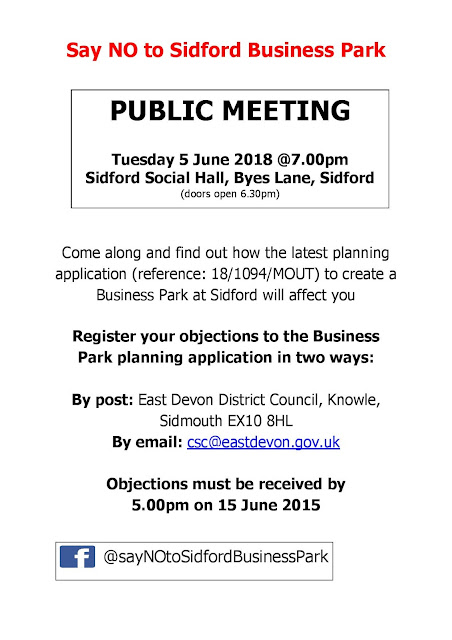 Public Meeting Hosted by Say NO to Sidford Business Park

Say NO to Sidford Business Park.
.
.
Posted by Jeremy Woodward at 15:37 No comments:

The project has in fact been building for some time now:
Support growing for National Park bid (which could bring £90m funding to Dorset) | Dorset Echo

Some five years ago it was not getting the support from the District Council, though:

Campaigners have put forward the idea of a national park to stretch along the Jurassic Coast from Exmouth in Devon to Poole in Dorset. Dorset and East Devon National Park Group claims the status would benefit the economy and provide environmental protection.

But East Devon District Council has recommended councillors oppose the plans, saying they would result in a loss of planning powers and could restrict growth.

Here is an outline from the EDW blog of how such a project might affect East Devon positively:

WHAT CAN A NATIONAL PARK DO FOR EAST DEVON?

“Following Michael Gove’s announcement that the Government will look at creating new National Parks – what will it mean to East Devon if a Dorset East Devon National Park were to become a reality?

A National Park is an exciting vision for our countryside, communities and economy and it can become a reality. It would work in partnership to:

• Conserve and enhance our great landscapes and heritage
• Boost our economy and attract new funding, investment and jobs
• Make the new National Park a global brand and destination; adding opportunity and value to our tourism businesses and local producers
• Help farmers and land managers to access funding and other support
• Work with communities for appropriate development, affordable homes for local people and a thriving, successful location
• As the planning authority for its area, partner with Councils and help deliver what our communities need

IT WILL LOOK AFTER OUR ENVIRONMENT

The Dorset landscapes and heritage are very special. They have been judged to be amongst the top 4 percent in the country.

The environment is Dorset’s and East Devon’s greatest economic asset and the National Park would have a duty to look after and promote our environment and heritage.

IT WILL SUPPORT COMMUNITY LED DEVELOPMENT IN THE RIGHT PLACES

The National Park would work with communities, councils and businesses to meet local needs, including housing and affordable homes for local people. National Parks are not against development, and they build on neighbourhood
plans to support thriving local communities.

The National Park would be a one-stop-shop for co-ordinated planning advice and would work in partnership with other local authorities.

IT WILL BOOST THE RURAL ECONOMY

A National Park would boost the rural economy and attract investment and jobs. Tourism is the area’s largest economic sector, and a National Park brand would put the area on the world map and encourage visitors to stay longer and spend
more.

It would help develop an area wide marketing strategy, manage tourism pressures and could attract funding for sustainable transport.

IT WILL HELP FARMERS AND LANDOWNERS

A National Park would help farmers and landowners to access funding and other support, and help them diversify and thrive as well as pursue conservation and recreational opportunities.

IT WILL BRING NEW AND EXTRA FUNDING

National Parks are separately funded by Government and not by residents or businesses. They also bid for extra funds which are invested in the local economy, in partnership with communities, not-for-profit and commercial businesses, farmers and landowners.

A National Park will be an asset and a close, efficient partner for the Councils and complement their work. It would bring additional resources and free up some council funding to help support local services and communities.

The South Downs NPA has secured over £100m in core and project funding since 20115.

HOW WOULD NATIONAL PARK STATUS HELP DORSET AND EAST DEVON?

National Parks have a responsibility to:

• Conserve and enhance the environment.
• Promote recreation, health, and the enjoyment and understanding of the special qualities of their area.
• Foster the economic and social wellbeing of their communities.

Let’s hope East Devon District Council make the right decision!
What can a National Park do for East Devon? | East Devon Watch
.
.
.
Posted by Jeremy Woodward at 15:21 No comments:

But it's also happening later - as discussed on Springwatch:
BBC Two - Springwatch

Spring was relatively late this year - not helped along by the #BeastFromTheEast! https://bbc.in/2kuT26T  #Springwatch 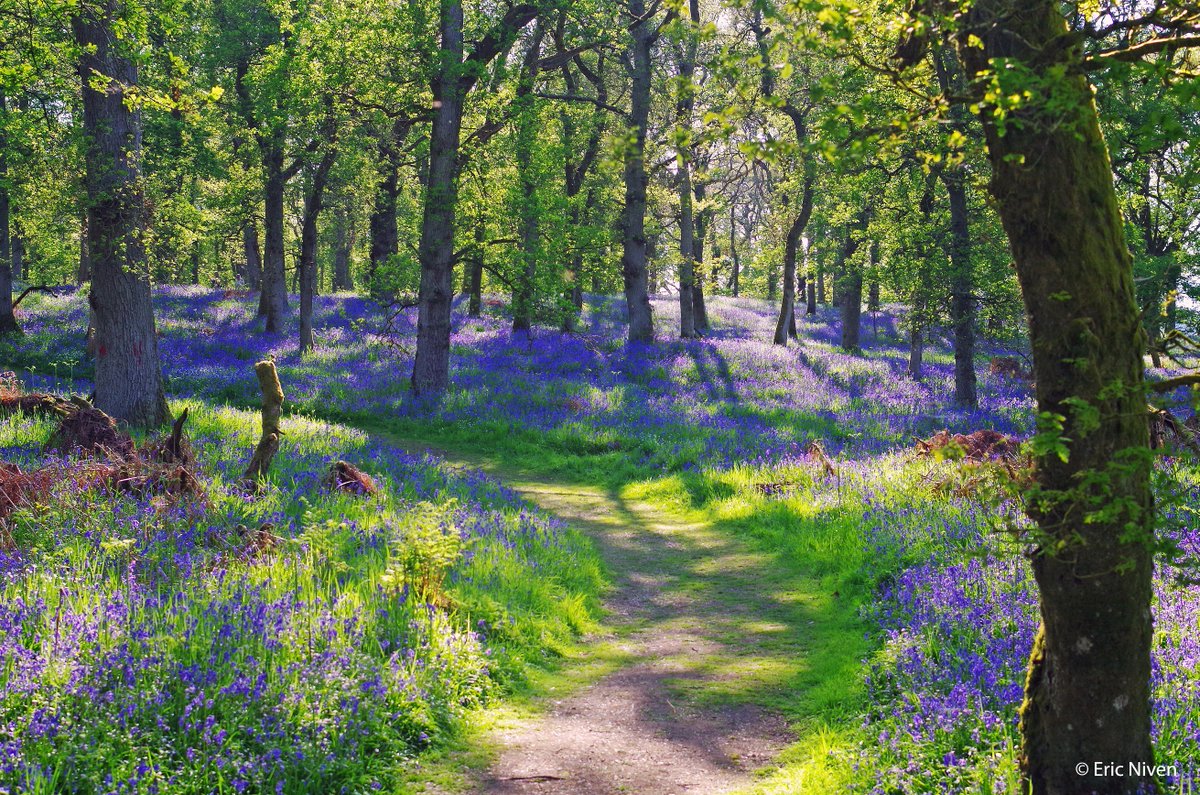 BBC Springwatch on Twitter: "Spring was relatively late this year - not helped along by the #BeastFromTheEast!

The point is that our weather system is now in a mess:
Extreme weather 'potentially catastrophic' for bats - BBC News
Climate change is radically reshuffling UK bird species, report finds | Environment | The Guardian

As reported in the Independent, we started spring very early, to be interrupted by a bout of winter, which then delayed spring proper: 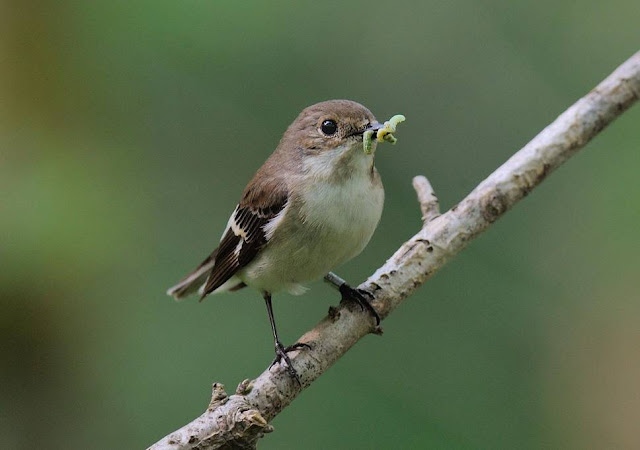 Female pied flycatcher: this species is finding it particularly difficult to adapt to the UK's changing climate ( Tom Wallis )

Warmer springs due to climate change are leaving chicks in UK woodlands hungry, according to new research. As springs get warmer earlier, caterpillar numbers spike too soon meaning by the time many birds' eggs have hatched later in the season, there is not enough food to go around.
The study adds to mounting evidence that the changing climate is playing havoc with the seasons and causing problems for animals and plants whose actions are calibrated to annual rhythms. When animals rely on seasonal shifts to feed, grown and develop, these mismatches can be fatal.
“Previous work has shown a mismatch does lead to population declines,” Dr Karl Evans, one of the study’s authors at the University of Sheffield, told The Independent.
Dr Malcolm Burgess, a bird researcher at the University of Exeter and the RSPB who led the research, added: "Forests have a short peak in caterpillar abundance, and some forest birds time their breeding so this coincides with the time when their chicks are hungry. With spring coming earlier due to climate change, leaves and caterpillars emerge earlier and birds need to breed earlier to avoid being mismatched. We found that the earlier the spring, the less able birds are to do this.”
The researchers focused on three species nesting across the UK – blue tits, great tits and pied flycatchers. They used data collected largely by a national network of citizen scientists to explore the spring emergence of oak tree leaves and the caterpillars that feed on them, and the timing of nesting by the three bird species.
The results of this work were published in the journal Nature Ecology and Evolution.
"The biggest mismatch was among pied flycatchers – as migratory birds, they are not in the UK in winter and therefore are much less able to respond to earlier spring weather,” said Dr Burgess. The species fly from sub-Saharan Africa at the beginning of spring.
The research team also wanted to investigate whether there was a greater seasonal mismatch effect in southern Britain – which has seen particularly severe declines in some bird species in recent years.
But Dr Ally Phillimore, a member of the research team from the University of Edinburgh, said they "found no evidence of north-south variation in caterpillar-bird mismatch for any of the bird species". He added: “Therefore, population declines of insectivorous birds in southern Britain do not appear to be caused by greater mismatch in the south than the north."
Bird numbers in general have seen significant declines in recent years, a trend thought to be linked with the collapse of insect populations which in turn results from the overuse of pesticides. Farmland bird populations across Europe have dropped by over 50 per cent in the last few decades.
With climate change placing additional strain on bird populations, it is unclear whether or not they will be able to adapt if its effects continue to worsen.
“Birds shift the timing of breeding, and they tend to breed earlier in springs that are warmer – but the manner in which they are shifting isn’t sufficiently rapid, that’s the theory,” said Dr Evans. “People are starting to look at whether there’s capacity for evolutionary change to improve their ability to match, but the evidence is very mixed at the moment.”
Climate change leaves birds hungry as chicks hatch too late to eat caterpillars | The Independent
.
.
.
Posted by Jeremy Woodward at 15:01 No comments: