Daniel Clark
Local Democracy Reporting Service
East Devon District Council's new leader has been described as a "solution finder" by a fellow councillor.
Councillor Ian Thomas was unanimously elected to become the new leader of the council at the annual council meeting last night.
The Conservative, who has represented Trinity Ward since 2009 and is a director of the Exeter Science Park Company, replaces Councillor Paul Diviani, who announced that he would be stepping down from his post earlier this year.

We all know that the next ten years will be the most difficult and challenging for local government, and we need someone with financial acumen and creativity to lead us, and in his business career, he has demonstrated that each day. He is a solution finder, and that is exactly what we need now and for the forthcoming year."

And with the official press release here: 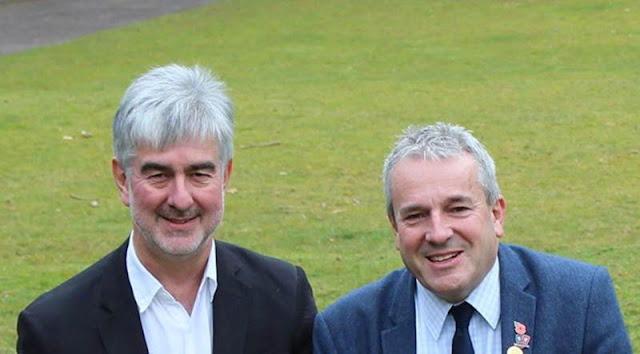 The newly elected Leader of East Devon District Council, Cllr Ian Thomas, has set out his vision for transforming the council and continuing to provide outstanding services despite the ongoing financial challenges facing all local authorities.
In his speech to last night’s (Weds May 16) Annual Meeting, Cllr Thomas said he was making changes to the council’s Portfolio structure and councillor appointments to recognise two immediate challenges.
He said:


The first challenge is to focus Portfolio resources and responsibilities more closely on council priorities and aspirations. Since I joined East Devon District Council, in 2009, Portfolio structure and responsibilities have remained largely unchanged.
Yet the environment in which we deliver services and the way our funding is secured, have changed beyond recognition. In 2010 we received approximately a third of our General Fund income via Government Revenue Support Grant – we now receive…. nothing.

Further pressure on Public Sector finance is inevitable, an imminent end to austerity unlikely and Brexit the focus of our national leaders.

Change would accelerate, he said, driven by advances in technology and communication, central government priorities, and economic and demographic pressures.
He added:

It is therefore essential our Member organisation is focussed, yet flexible and nimble, that we understand risk and maintain sound governance.

To support this aim, Cllr Thomas has added two new Portfolios to the council’s Cabinet - Asset Management and Transformation. He has also strengthened the key Overview Committee, Budget Working Party and Capital Strategy and Allocation Panel.
Cllr Thomas said that the second challenge “is to ensure all 59 Members are genuinely motivated and engaged, that we all contribute our skills and experience positively to the future of our Council and services we deliver on behalf of East Devon residents.”
For this reason, he said he would enhance the scope of Portfolio Holder ‘Think Tanks’ to become Portfolio Teams.
He added:

Additional lead Members have also been appointed, each with an important area of specialist interest.
Cllr Thomas said:


Lead Members now work within a Portfolio team, rather than in isolation, to further build member experience and enhance council resilience, through the sharing of knowledge and skills.

The structure proposed is an interim step. During the next council year, we will review both Member and officer organisation structures, to ensure that resources are focussed on key council priorities, mandatory services, and the discretionary services our residents’ value.

Cllr Thomas, who represents Trinity ward, led tributes from Members to the former leader, Cllr Paul Diviani, and outlined the considerable achievements he has made during his tenure.
He said:


Seven years ago, Paul stood on this same stage to appoint his first portfolio team. How much has East Devon changed since then?

Our Growth Point has made great strides. Cranbrook has become home to over 3,500 people in just six years. The Science Park is rapidly expanding, well on the way to achieving employment targets, within a valuable Enterprise Zone. Seaton and Exmouth regeneration projects continue to attract investment. Yet the East Devon District Council element of our council tax has barely changed. Our council achievements owe much to Paul’s leadership.