The destruction of a statue of the Virgin Mary is probably not what you'd expect to be allowed to happen these days in Britain - but developer PegasusLife seems to have allowed exactly that to happen at a site they wished to develop a couple of years ago in London: London North West, UK - A twenty feet high glass fibre statue by sculptor Michael Werner pinned to the facade of a hostel formerly owned by the Convent of the Sisters of Providence was reportedly turned down when offered free to an architectural salvage yard.

Tom Foot in the Camden New Journal 19th November reported that the hallowed sculpture of a pregnant Virgin Mary is feared smashed to smithereens despite assurances it would be spared from demolition.

Developer PegasusLife had told the New Journal in June that the sculpture would be preserved. The South End Green Association asked the company for it to be transported to the countryside home of a member with a large garden.

Renee Vincent, a retired French teacher whose flat overlooked the statue, said its destruction amounted to sacrilege, having previously offered have its head in her courtyard.

The hostel was owned by the Sisters of Providence for almost 50 years which sold up to fund its move to a new home in Royston, Hertfordshire, with Pegasus winning planning permission from Camden Council last year to build a 10-storey care home on the land.

This featured in the letters page of the latest Herald: 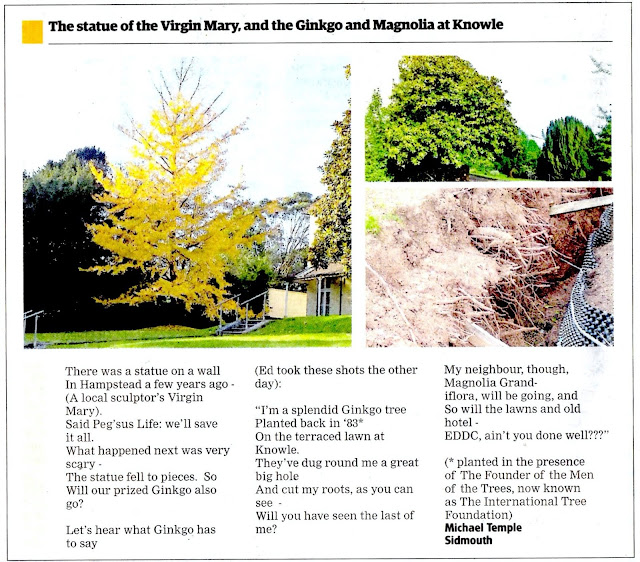 Here is the same poem with the photos in full:

The statue of the Virgin Mary, and the Ginkgo and Magnolia at Knowle

There was a statue on a wall
In Hampstead a few years ago -
(A local sculptor's Virgin Mary).
Said Peg'susLife: we'll save it all.
What happened next was very scary -
The statue fell to pieces.  So
Will our prized Ginkgo also go?

Let's hear what Ginkgo has to say
(Ed took these shots the other day):

“I'm a splendid Ginkgo tree
Planted back in '53*
On the terraced lawn at Knowle.
They've dug round me a great big hole
And cut my roots, as you can see  -
Will you have seen the last of me?

My neighbour, though, Magnolia Grand-
iflora, will be going, and
So will the lawns and old hotel -
EDDC, ain't you done well???”

(* planted in the presence of The Founder of the Men of the Trees, now known as The International Tree Foundation) 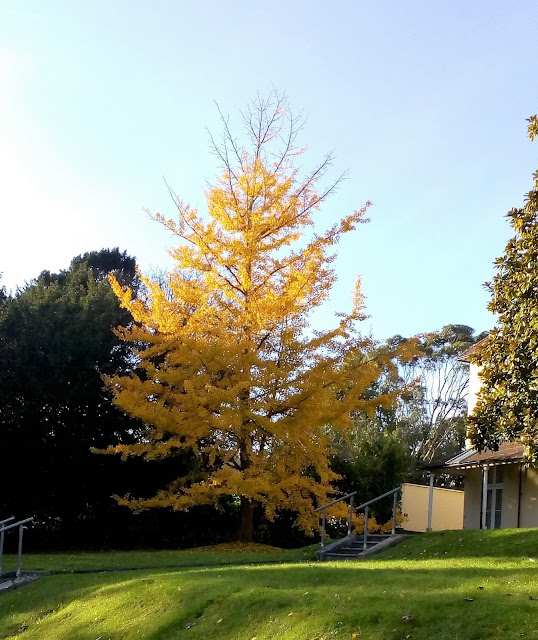 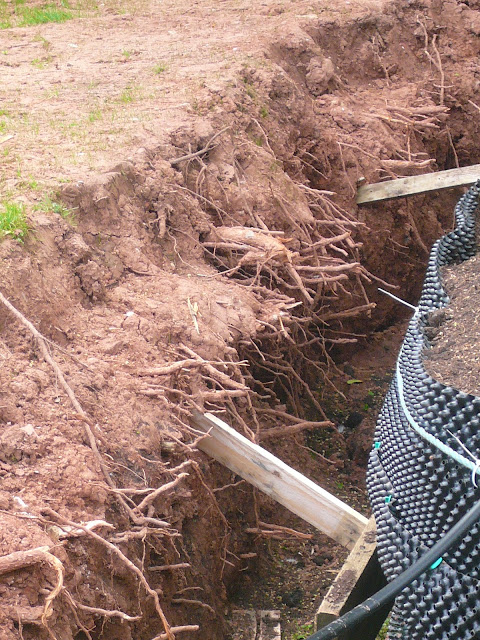 The cut roots of the ginkgo tree. 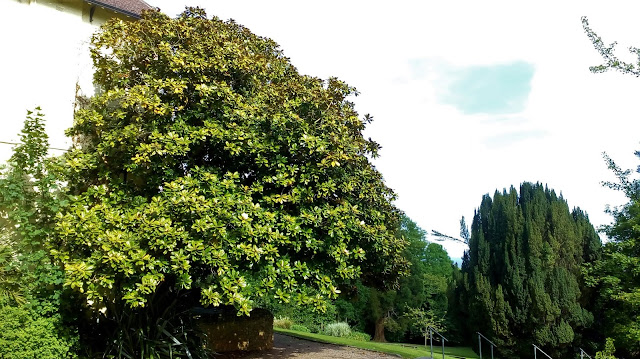 This magnolia will also have to be sacrificed.

Although observers were sceptical of the developer's PR exercise:
Futures Forum: Knowle relocation project > "the Ginkgo might be saved, although the chances of its survival are probably less than evens"

In February, the Arboretum had objected to the destruction of the park's tree heritage:
Futures Forum: Sidmouth Arboretum > and Knowle

Earlier, District Council tree officers had claimed that it was not necessary to protect the ginkgo:
Futures Forum: A new plaque for the historic ginkgo in the Knowle park ..... “There is no need to make a TPO, as it is not at risk from untoward management or removal.”