Brexit: and robots looking after us in our old age

The Japanese will not countenance this, despite all the problems:
Without immigrants, Japan faces an 'uncertain future' - CNN

The world's third-largest economy must cope with an acute labor shortage and a declining population.
But the government remains resistant to reforming immigration, beyond accepting skilled professionals, amid fears of disruptions to social order.
The country received nearly 20,000 applications from asylum seekers last year but accepted only 20.

Japan offers an unsettling glimpse of all of our futures

A determination to maintain social cohesion is admirable, but the country has paid a price 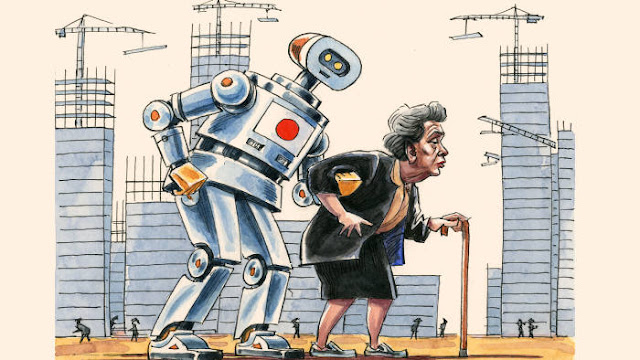 A few years ago Wired, the technology magazine, ran a regular feature called “Japanese schoolgirl watch”. The concept was not as dubious as it sounds. The idea was simply that the schoolgirls of Japan are technological trendsetters and that the gadgets they adopt today will go global tomorrow.

These days, however, Japan is also a global trendsetter in other, more troubling ways. If the policy makers of Europe and North America want a sense of the social, economic and strategic challenges they may face in the coming years, they should visit Japan, as I did last week.

One idea might be to start a “Japanese granny watch”, since the country offers a sobering lesson in the consequences of longer life expectancy and lower rates of childbirth. Both trends are particularly extreme in Japan, but replicated – to some degree – in most rich nations. Japan’s population began to shrink in 2010. It is projected to fall from 127m today to 86.7m by 2060, when 40 per cent of the population could be over 65. As a result “care robots” – which can do things such as helping granny off the lavatory, as well as engaging in simple conversations about the weather – are at the centre of a flourishing industry.

Japan’s army of old people vote in much greater numbers than the young so pensions and social-security benefits have been maintained, even as other services are cut. Meanwhile, the young face a future of higher taxes and find it increasingly hard to get the secure jobs that their parents enjoyed.

All of these trends should resonate in many western nations. The population of Germany, the fourth-largest economy in the world, just behind Japan, has also begun to shrink. Even in the US, where the demographics are more favourable, the retirement of baby boomers has helped to drive America up against its debt ceiling.

Many politicians in Washington evidently think that once the ratio of debt-to-gross domestic product nears 100 per cent, Armageddon beckons. They should visit Japan, where that ratio is now more than 230 per cent – and the country is still orderly and functioning. But Japan is very vulnerable to any rise in global interest rates. Even in the current climate of ultra-low rates, interest on the debt consumes about 25 per cent of Japan’s national budget.

The much-touted radical economic experiment of Abenomics is, in part, a reaction to debt. Shinzo Abe, Japan’s prime minister, aims to increase inflation to about 2 per cent – in the hope that the subsequent economic growth will generate the revenue required to pay increasing social costs and reduce the debt-to-GDP ratio. Radical, open-collared economists now prowl the previously sedate halls of the Bank of Japan. The near doubling of the money supply involved in Abenomics makes the US Federal Reserve and the European Central Bank look positively cautious by comparison. Economists are agog at the boldness of the Japanese experiment. Yet even supporters of Abenomics acknowledge that there are big gambles involved – in particular, the risks of capital flight, market panics and (ultimately) excessive inflation.

Radical measures, of some sort, were certainly necessary. It is now more than 20 years since Japan’s property and stock bubble burst – and the country’s economy has never really regained its mojo. Instead, the country has found that measures taken to prop up the system, such as ultra-low interest rates, created their own problems. It was Japan that introduced the world to the “zombie bank” – and now similar zombies are proliferating in Europe.

Mr Abe’s radicalism is not driven solely by domestic economics. Japan has also been jolted into action by the perception of a growing threat from China. The Chinese economy surpassed Japan’s in size in 2011; the gap is widening with each passing year. China will soon have its own problem with ageing, as a result of its one-child policy. But Japanese strategists point out that China’s annual military spending is now three to four times that of Japan. The two countries are engaged in dangerous military jostling, as they pursue a territorial dispute over some barren rocks in the East China Sea. While the west still debates whether the rise of China is threatening, there is no longer a debate in Japan, where national alarm is palpable.

The challenges facing Japan are so complicated and varied that it is impossible to leave the country with a simple set of lessons. The determination to maintain social solidarity and to respect promises made to its citizens is admirable. But Japan has also paid a price for emphasising social harmony. Protecting the jobs of the old has restricted opportunities for the young – 38 per cent of whom are now in “precarious” work. A refusal to countenance mass immigration has also made an ageing society much harder to deal with. Social cohesion is all very well, but it seems odd to prefer to be nursed by a robot than an immigrant.

Yet, despite these daunting challenges, the mood in Japan is much more optimistic than for many years. Mr Abe’s rhetoric can be nationalistic but his energetic leadership has created hope that the country can break free from stagnation. The economy is growing at nearly 4 per cent and the award of the 2020 Olympics to Tokyo has lifted spirits. Japanese schoolgirls and grannies still need watching. But Japan now also has a leader who merits close attention.

Japan offers an unsettling glimpse of all of our futures

As told by the Express:

‘What about that human touch?’ Elderly will be cared for by ROBOTS to solve staff shortage

ROBOTS which can listen, learn and react to people are being introduced in care homes to help look after residents and prevent loneliness.

Can ROBOTS take care of the elderly?
Play Video

The humanoid companions, which are equipped with artificial intelligence, will be able to recognise the needs and emotions of frail, elderly residents. They will take the strain off overburdened care workers and as they get to know their charges will adapt their conversations to subjects of interest to them.

A £2.5million EU-funded trial in partnership with the University of Bedfordshire and Advinia Health Care, one of the UK’s largest care providers, will be launched in September.

Dr Chris Papadopoulos, principal lecturer in public health at the university, said: “These robots are able to adapt, learn and tailor their conversations according to what they find out about an individual just as two people might do in a normal conversation. 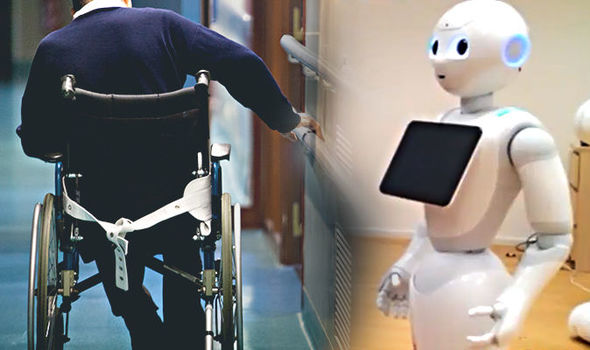 Asus Zenbo: This adorable little bot can move around and assist you at home, express emotions, and learn and adapt to your preferences with proactive artificial intelligence.

They can learn about a person’s cultural background and values and adjust to this too.

“The software is in this way groundbreaking. We want to explore to what extent they might prevent loneliness and isolation, improve mental health and reduce family caregiver stress.”

However, he insisted the technology was not intended to replace carers, adding: “These robots are not designed to replace anyone’s job but complement the team by increasing the workforce and allowing a robot to be present with someone who would otherwise be by themselves.”

The idea has appalled some. Judy Downey, of the Relatives and Residents Association charity, said: “This is treating people like commodities. 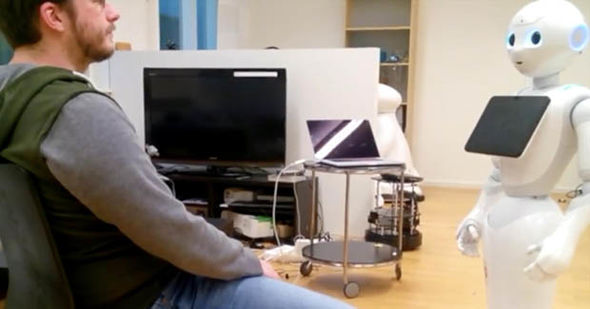 "The key to looking after someone is having a relationship in which you might notice if someone is upset after a phone call or if they look unwell. What matters is the smile, the human touch.”

The 4ft tall robots, called Pepper and designed by Softbank Robotics in Japan, have artificial intelligence called Caresses which is designed to interact with residents, rather than just carry out manual tasks.

They have a tablet on their chests which residents can use to skype call a relative, play games, videos or music, or remind them when to take their medication.

Advinia chairman Dr Sanjeev Kanoria said: “The robots will not replace care workers. They do not have working limbs so they cannot carry out essential tasks.”

Care homes: Elderly to be cared for by ROBOTS as staff shortages hit | UK | News | Express.co.uk
Can ROBOTS take care of the elderly? | Videos | Express.co.uk
.
.
.
Posted by Jeremy Woodward at 07:40