Technologies to remove plastics from our oceans

Getting rid of plastic will require a lot of research:
Futures Forum: A solution to our plastic problems > scientific research
Futures Forum: Exeter University launches crowdfunding campaign to fund eXXpedition North Pacific 2018 and other research into plastics in the oceans

The project is about to be implemented on the North Pacific gyre, as reported in today's i newspaper:

Tom Bawden
Friday May 4th 2018
An expedition to the Pacific delivered a massive shock in March when researchers discovered that the world’s biggest ‘plastic island’ could be 16 times as large as previously feared – covering an area three times the size of France and containing an astonishing 1.8 trillion pieces of plastic.
The Great Pacific Garbage Patch – a plastic stew of everything from bottles and personal care microbeads to synthetic clothing fibres and discarded fishing gear, located halfway between Hawaii and California – was already a major environmental concern, even before the surprise finding.
Now, by far the most comprehensive analysis to date revealed that the morass is much bigger than thought, covering 1.6 million square kilometres and weighing 80,000 tons, according to the study, published in the peer-review journal Scientific Reports.

‘It’s shocking,” said Joost Dubois, a spokesman for the Netherlands-based Ocean Cleanup Foundation, which led the team of researchers from seven countries. “We’re basically poisoning our own food, especially for those of us relying on fish for our diet,” he said.

Larger objects – defined as anything from a 5mm wide plastic bottle fragment to a giant fishing net – accounted for 92 per cent of the weight. ‘Microplastics’ such as synthetic clothing fibres and microbeads used to rough to roughen personal care products such a tootpaste made up the remainder. Even though microplastics are much lighter than the larger items, the make-up of the garbage patch was unexpected.

All plastics, however large or small, have been moulded into a sprawling mass by the Pacific Ocean’s currents.

“We were surprised by the amount of large plastic objects we encountered,” said Dr Julia Reisser, the lead oceanographer at the Ocean Cleanup Foundation. We used to think most of the debris consists of small fragments, but this new analysis shines a new light on the scope of the debris,” she added.

The fact that big plastics make up such a large proportion of the debris could either be good news or bad news, depending on what happens next.
The scenarios

If the patch is not tackled it is bad news because the plastic will break down into ever smaller fragments, where they will penetrate deeper and deeper into the marine – and potentially human – food chain.

But it’s good news if action is taken now and the plastic is collected before it breaks down, since bigger items are much easier to scoop up.

Fortunately, the Ocean Cleanup Foundation is about to begin what looks to be by far the biggest rubbish collection round the world has ever seen – using some new technology it has created.

“This research underlines the urgency of dealing with the plastic pollution problem. Since the results indicate that the amount of hazardous microplastics is set to increase more than tenfold if left to fragment, the time to start is now,” said Boyan Slat, 23, who set up the Ocean Cleanup and is lead designer of the technology. He first became aware of the problem of ocean plastics as a 16 year old schoolboy on a diving holiday in Greece.

“I could see more plastic bags than fish on that scuba dive,” he remembers. “I had to do a high-school science project that year and I decided to really dedicate myself to this issue. Everybody told me it would be impossible to clean up because the plastic is extremely dispersed over a wide area,” he said.

Seven years later and the technology he has developed deals with the dispersal issue by making the oceans’ currents do the work.

How the technology works

Instead of going after plastic debris with vessels and nets – which would take thousands of years and billions of pounds to collect – the campaign will use a fleet of extremely long floating screens that will dangle down in the water like an artificial coastline, collecting the plastic as the currents push the debris into the screen.

It will then be scraped off the screen at regular intervals and loaded into boats where it will be transported to land and recycled. It won’t be able catch plastic of less than 1 centimetre in diameter but it will be able to get the vast majority of debris by weight. 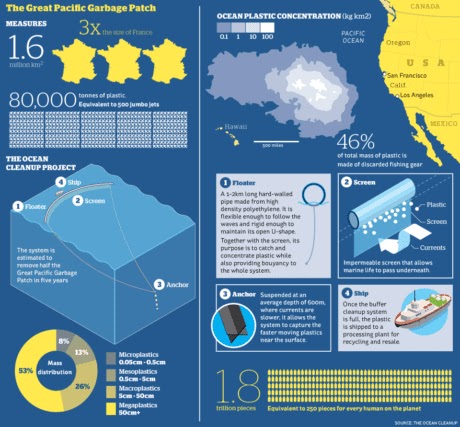 Once the team has made a reasonable dent in the Pacific Garbage Patch it will turn its attention to some of the oceans’ four other giant debris patches – two of them in the Atlantic, one in the Indian Ocean and the other in the Great Pacific Ocean.

The move has excited conservationists around the world, who have been increasingly devastated by the scale of plastic pollution.

“Plastic pollution is a really, really big problem. I work on one of the most remote places on Earth and we find plastics all over,” said Patagonia-based Pablo Borboroglu, the founder of the Global Penguin Society, who was last week awarded the prestigious Whitley Gold, a lifetime award, for his conservation work across the southern hemisphere.

“The plastic island in the Pacific Ocean is massive – and it would be fantastic if new technology is able to clear that away,” he said. “And if you can combine technology like that with a mass reduction in plastic production, then it’s a home run,” Borboroglu added.

Kick-starting the world’s biggest clean-up – on a floating plastic island the size of France
.
.
.
Posted by Jeremy Woodward at 01:00