Greening your hospital and care facilities is clearly a good idea:
Futures Forum: Look after your parks and green spaces: they save the NHS £millions
Futures Forum: Therapeutic garden project begins at Sidmouth Victoria Hospital

But in south-west Scotland, they really are making an impact, as reported last week in the Architect's Journal: 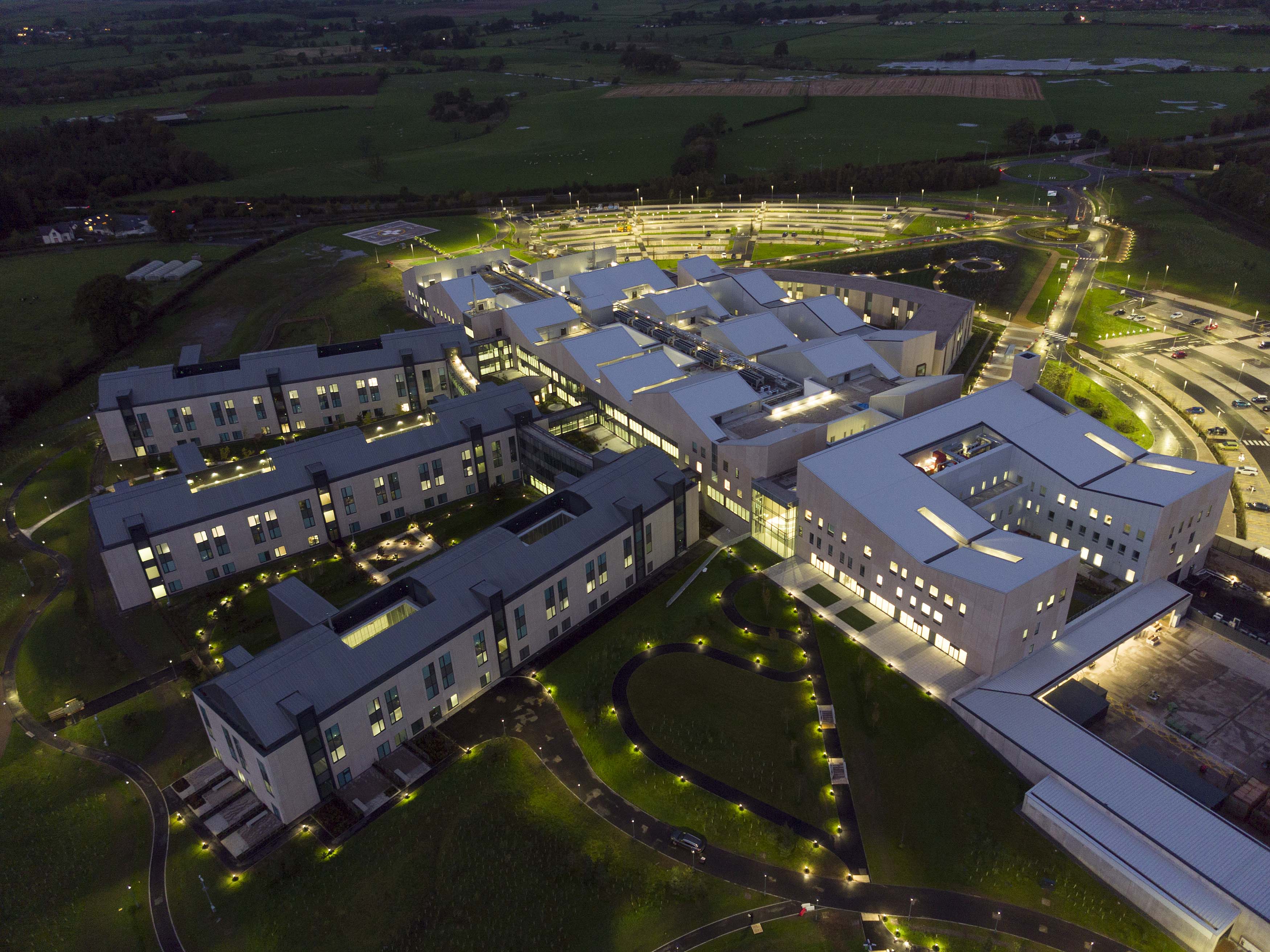 The new hospital will open in time for the 70th anniversary of the NHS. Images courtesy of Paul McMullin
Ryder Architecture and NBBJ have collaborated on the design of the newly-completed Dumfries and Galloway Royal Infirmary as part of the High Wood Health consortium for NHS Dumfries and Galloway.
The new 63,500sq m replacement hospital is located on a greenfield site on the outskirts of the Scottish town of Dumfries and includes 344 beds, day case and inpatient surgical suites, an emergency care centre, ambulatory care centre, specialist oncology, maternity and paediatric facilities.
The opening of the new hospital coincides with the 70th anniversary of the NHS next year.
The £212m project is designed to meet the increasingly-sophisticated healthcare needs of the region’s ageing population.
It is conceived as a ‘garden hospital’, with a design focused on light and landscape made possible by its rural setting.
The low-rise design with pitched roofs breaks up the mass of the building, allowing it to sit harmoniously within its surroundings.
The design also creates 17 courtyards and gardens which function as places of rest and healing as well as provide views from inside.
The emphasis on outdoor spaces is based on scientific research that shows a connection between natural elements and positive health outcomes, including lower stress levels, reduced blood pressure, the need for patients to take less medication, and even-faster healing times.
The hospital is person-centred, considering staff as well as patients and promoting an uplifting, positive experience for all who use the building. This is achieved through an emphasis on natural daylight and intuitive wayfinding throughout the hospital.
The main entrance atrium is a welcoming civic space, lit from above by a long row of skylights, along with a large bay window providing sweeping views across the surrounding countryside. 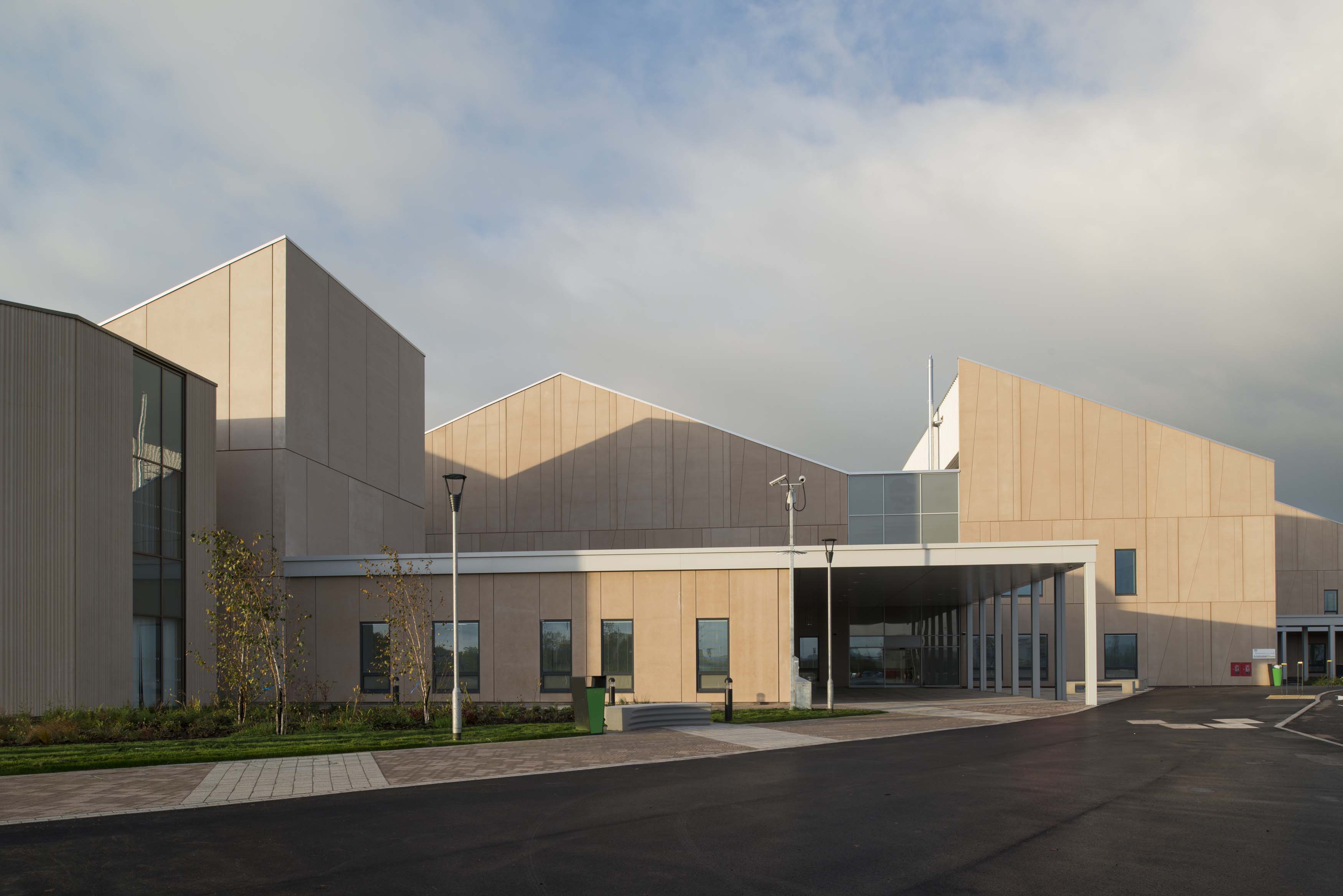 Light courts throughout the inpatient pavilions allow for clear views across wards for both patients and staff, opening up interiors and filling spaces with natural daylight, avoiding a sense of isolation for patients.
Landscape design, in collaboration with Fira, promotes integration between the external and internal spaces.
Wards are surrounded by garden spaces, some of which play an integral part in therapeutic practice, and palliative care bedrooms have their own private gardens, with dedicated space for beds to be wheeled outside, allowing patients to experience the external environment.
Paul Bell, partner at Ryder Architecture and design team leader, said: “The new hospital is a great example of what can be achieved by effective collaboration, a pioneering approach to technology, and a passion to deliver to the highest quality.
“That approach has delivered our collective vision for a new hospital without compromise, an uplifting people-centred environment connected to its wonderful landscape setting for the effective and efficient delivery of healthcare for the people of Dumfries and Galloway.’’
Jane McElroy, principal at NBBJ and lead clinical designer for the new hospital, added: “Hospitals are increasingly focused on creating environments that improve the experience for patients, families and staff.
“With the themes of comfort and wellbeing foremost in our minds, we have designed a therapeutic and inspirational new hospital for Dumfries, one that serves as a prototype for other healthcare developments in the future.”
The building comprises three distinct elements:
Externally the building has been designed to be sympathetic to its rural Scottish environment.
The facades of the central block are clad in honey-coloured pre-cast panels that mirror the local Glasgow Blonde stone, while the inpatient pavilions and the women and children’s centre feature a reconstituted stone finish reminiscent of white ‘Galloway’ granite, in a nod to the region’s heritage.
In the central building, medical facilities include an Integrated Emergency Care Centre, comprising an accident and emergency facility (A&E), a combined assessment unit, and fracture and orthopaedic unit; critical care units, an oncology centre, an ambulatory care centre, and a surgical complex with eight operating theatres and four endoscopy procedure suites.
Open, social spaces have been designed to encourage patients to move around, and circulation routes include rest spaces for older patients, as well as areas intended to promote interaction between staff from different departments. 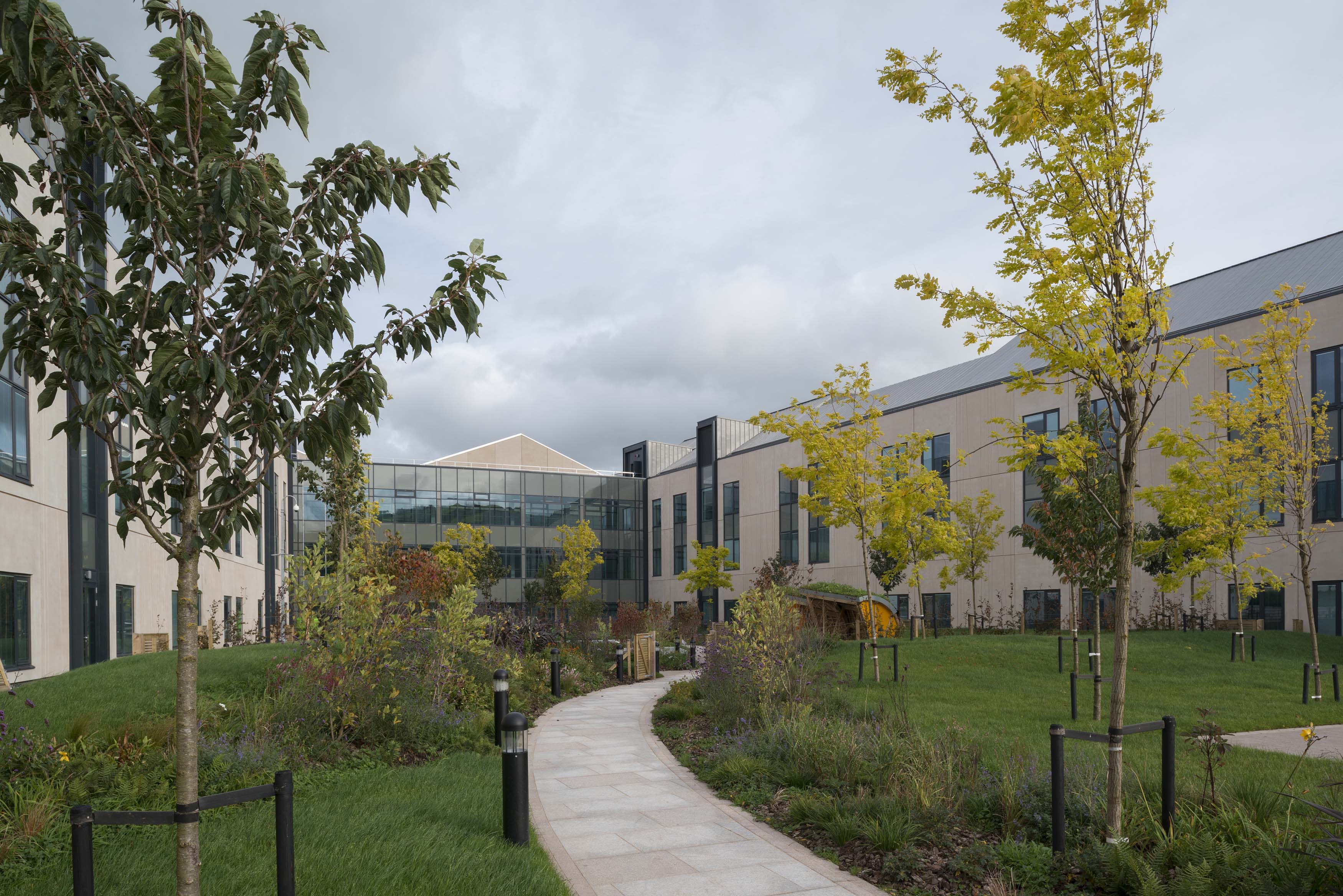 Outdoor space is key to the design of the new hospital
Circulation routes in the hospital are segregated by floor to facilitate maximum efficiency, avoiding clashes, so that outpatient and visitor flow is largely confined to the ground floor, while inpatient flow, linking the maternity and surgical wards to the operating suites and critical care centre, is on the first floor.
Traffic from facilities and hospital management happens on the lower-ground level. These circulation routes are designed with clear wayfinding features, which facilitate efficient movement of traffic both inside and out.
The entrances to the main block and the accident and emergency centre can both be seen clearly upon approaching the hospital, creating a ‘decision point’ for people arriving at the campus, providing a clear route to those needing to access emergency care.
The hospital, constructed by Laing O’Rourke, with WSP acting as structural engineer and Hoare Lea as mechanical and electrical engineer, will serve many small, widespread and diverse communities within the 2,400 square miles covered by NHS Dumfries and Galloway in Scotland’s South West.


The hospital is on track to achieve a BREEAM Excellent rating. 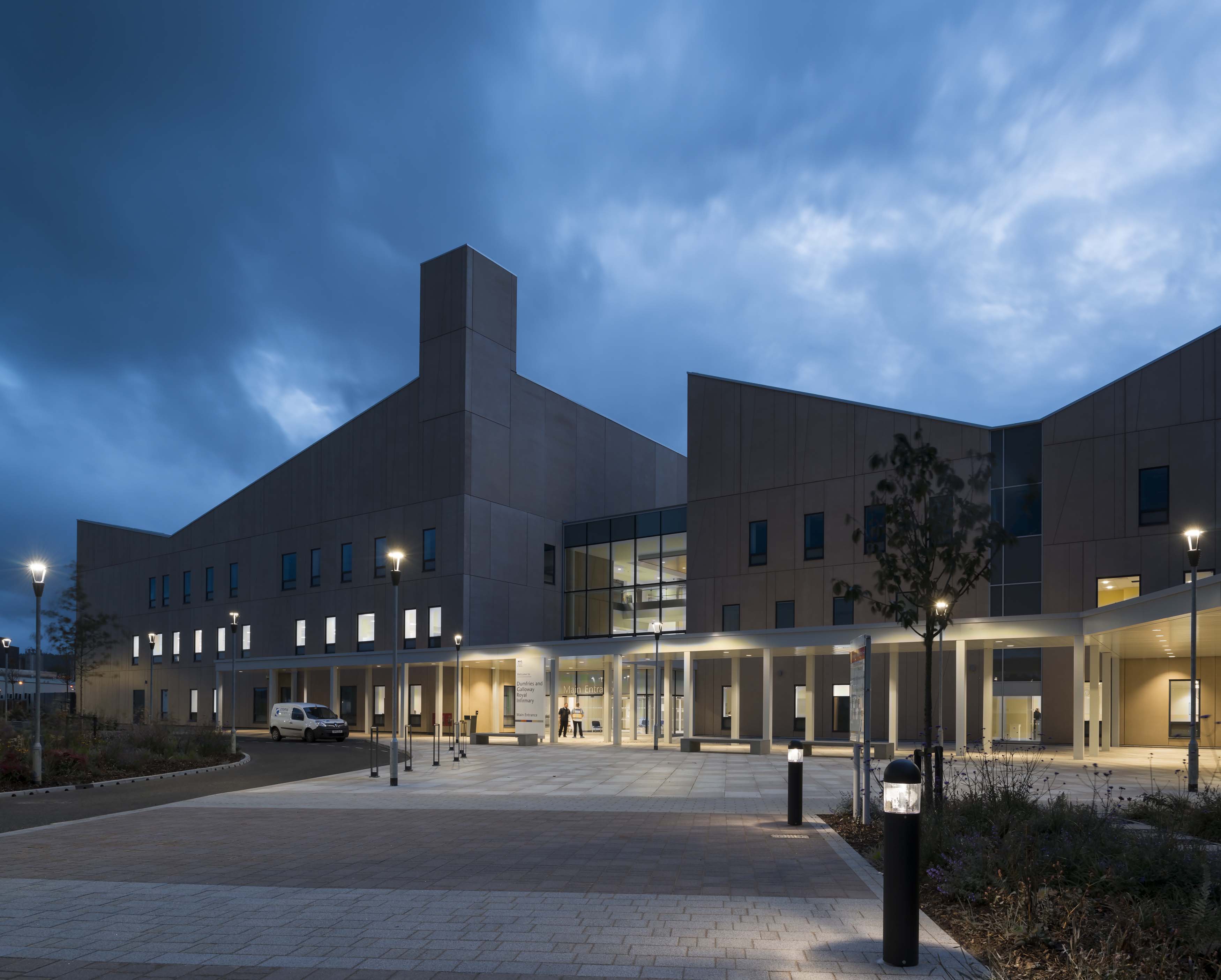