£9million plan to save Sidmouth from coastal erosion goes on display

Members of the expert panel talking to residents about the proposals for the Sidmouth Beach Management scheme.

Multi-million pound proposals to protect Sidmouth from coastal erosion and flooding for the next century have gone on display.

East Devon District Council and the council’s consultants Royal HaskoningDHV showcased the preferred option for the Sidmouth Beach Management Scheme which would see a new groyne installed on East Beach and raise the splash wall along the promenade.
The £9million project would also incorporate importing shingle on both East and Sidmouth beach and hopes to be completed the work by 2020.
Residents are being asked to help the council raise £3.3million towards the project, with remaining funding hoping to be secured through the Environment Agency.
Councillor Tom Wright, portfolio holder for the environment at EDDC, and chairman of Sidmouth beach management plan stakeholder group, said: “It is a 100-year plan, so its £9million pounds, which is the cost of the project, not just engineering work, but also to cover the cost of maintenance going forward, moving the shingle about, replenishing the beaches, maintenance. Although it is a big chunk of money, it’s a big chunk of money for a long-term benefit.”
Under the proposals the groyne will help to keep shingle from being moved eastwards away from the cliffs and the higher wall will capture water flooding low-lying areas in the town centre.
Following the exhibition, the consultant’s next steps will include finalising the preferred option and approval for the outline business case – the required document to obtain funding.
Then work will be carried out to collect all the supporting information to present to statutory bodies, which will include the detailed design, engineering drawings and calculations for pricing and appointing a contractor for the works.
Consultants hope work could start during 2019 if the necessary permission is in place, and aim to complete to work in 2020.
Caroline Price, principal maritime consultant for the scheme, said the exhibition was to seek the publics thoughts, show why the plan delivered on a range of objectives, and explain why other options had not been taken forward.
She said: “When you are choosing the most beneficial one, the preferred option for a beach management plan, what you have to take into consideration the technical, the environmental and the financial elements of the project. And the option they are taking forward at the moment delivers on all of those fronts.
“So it’s not the most expensive and it’s not the most damaging and its not the most technically challenging in terms of deliverability because that is part of it too. You can design all sorts of wonderful schemes but if it is very difficult to deliver and you have large delays that obviously has negative implications for the people who are affected by flooding.”
Posters from the exhibition are on display in the reception at Knowle.
You can also view the exhibition material online here - comments can be made up until next Thursday (May 3).
£9million plan to save Sidmouth from coastal erosion goes on display | Latest Sidmouth and Ottery News - Sidmouth Herald

This is from the District Council's site:

The information displayed at Kennaway House, Sidmouth on 19th April is available as a single download, or as individual posters:

If you have comments on how the splash wall could be enhanced, or the other proposals please send them to sidmoutheastbmp@eastdevon.gov.uk before the 3rd May 2018
April 2018 Public Consultation - East Devon

With their press release here:
25 April 2018 - High levels of interest from public in Sidmouth Beach Management Scheme exhibition on April 19 - East Devon
And the Herald gives more information about the consultation:

Some of the images used in the exhibit.

More than 150 people attended an exhibition showcasing the preferred option for protecting Sidmouth and its eroding cliffs.

Some of the images used in the exhibit.
East Devon District Council hosted the event at Kennaway House to show residents the latest works being done on Sidmouth Beach Management Scheme.
The preferred option includes the installation of an addition 120 metre long groyne on East Beach - the current rock groyne in Sidmouth only reaches around 75 metres. The plan is to then raise the splash wall, that separates the road and the promenade, from around 50cm to a metre.
The exhibit showcased ideas taken from other coastal towns which had tried to be more creative with their sea defences. The ideas included built in seating, plants and artworks.
The £9million project would also include the importation of shingle onto both the town’s beaches. 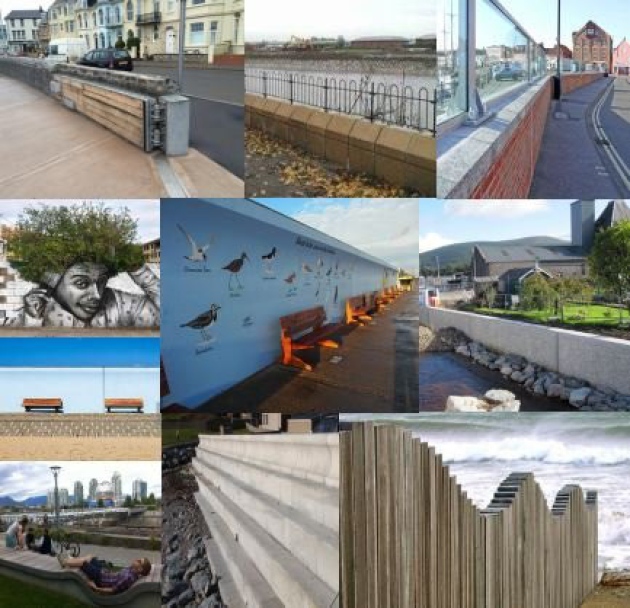 Some of the images used in the exhibit.
After seeing the showcase resident John Hamilton, of the Cotlands, said: “As long as the seawall isn’t any higher then a metre and not like Seaton’s.”
John Mullins, 90, who lives on the seafront added: “I have just had a look at that ridiculous splash wall. You won’t be able to see the sea over it. They have already ruined Seaton’s front and now they are talking about doing it to Sidmouth.”
Jo McInerney, 80, of Cliff Road, said: “We would just like it done. I have lived at the top of the cliff for 20 years. There have been lots of plans and ideas over the years and it has come to nothing.”
Dave and Peggy Anderson, of Sid Road, said: “We think raising the wall would be a good idea. I think the built-in seating would be a really good idea.”

Some of the images used in the exhibit.
The council’s project team and consultants Royal HaskoningDHV spent the afternoon discussing the scheme’s outline design to prevent coastal flooding and erosion. Visitors were shown the flood risk to more than 100 residential properties in low lying areas behind the seafront from waves overtopping the promenade. That flood risk will be increased in the future as the cliffs to the east of the town recede and the eastern side of Sidmouth becomes exposed to coastal conditions.
Councillor Tom Wright, who is responsible for environment and chair of the scheme’s steering group, said: “We had a really positive reaction to the exhibition material and the hard work which has gone into it, and I was pleased to see so many people coming to learn first-hand about our plans to protect the lovely town centre from the threat of flooding.”
Alice Johnson, coastal engineer for Royal HaskoningDHV, added: “It was great to have the opportunity to share this update on the Sidmouth and East Beach BMP with the community. We found the event extremely useful and thank all those who attended for their insightful questions and contributions which we will seek to build in to our continuing work.”
Residents have their say on plan to protect Sidmouth's seafront and beach’s crumbling cliffs | Latest Sidmouth and Ottery News - Sidmouth Herald
.
.
.
Posted by Jeremy Woodward at 01:30