The Times has started the "Cities fit for cycling campaign" in the wake of one of their journalists being seriously injured whilst cycling in London: The Times | UK News, World News and Opinion


Start a cycling revolution — and save lives and money, MPs urge
Philip Pank and Kaya Burgess: Last updated at 12:02AM, April 24 2013

David Cameron is being urged to start a cycling revolution as a cross-party group of MPs and peers calls for the transformation of Britain’s streets.

The recommendations come after a four-month parliamentary inquiry, inspired by The Times Cities Fit for Cycling campaign, into how to encourage more cycling and to protect those on the roads.

The inquiry’s proposals include:
• A default 20mph speed limit on residential streets.
• Access for all schoolchildren to cycle training.
• Better road surfaces and junctions.
• Widespread segregated cycle routes.
• Improved lorry design and driver training.
• Stricter enforcement of road traffic law.
The inquiry report also calls for an increase in funding on cycle infrastructure to £10 a head.

A petition has been set up on the Government site calling on the Prime Minister to implement the recommendations in the report.

Health and Transport ministers say that they are trying to encourage more cycling as a way of reducing congestion, cutting pollution and helping beat an obesity epidemic that costs the NHS £5 billion a year.

Martin Gibbs, policy director at British Cycling, said: “The Prime Minister is a good friend of cycling and cycles himself. With his backing we can apply the focus we used to turn ourselves into a leading cycle sport nation to embed cycling across the whole of society so that it becomes a normal everyday choice which appeals to everyone.”

Start a cycling revolution — and save lives and money, MPs urge | The Times

And other national newspapers have taken up the story:

All-party cycling group gives a template to increase cycling levels ten-fold. But is there the political boldness to do it? 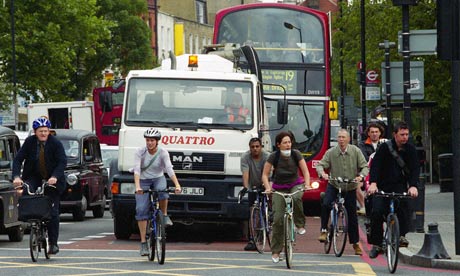 So, after three months of work, six evidence sessions and thousands of words of speculation, not least from me, we finally have a report.
On immediate glance – and at time of writing I've only seen the summary, not the full thing – the conclusions of the Get Britain Cycling inquiry, set up by the all-party parliamentary cycling group (APPCG), could hardly make more sense.
Oddly, the one thing that gives me hope comes in the curious form of Cameron's Eton and Oxford contemporary, and supposed political nemesis, Boris Johnson.
I was sceptical when Johnson talked of a cycling masterplan for London. But then I was amazed when I saw the boldness and scope of his eventual proposals, and the vigor with which he backed them.
Johnson's actions show we can be surprised, and they also offer a useful template for Cameron. You could even argue that such is the rivalry between the pair that the prime minister might be half-tempted to show he can be audacious, too.
Maybe not, but here's hoping.
Whatever happens, all credit to Julian Huppert, his co-chair Ian Austin, the other APPCG members, and of course the Times. It provided much of the impetus for the inquiry, largely funded it and has promised to harry Cameron until he signs up to its recommendations. Good for them.


MPs call for investment in cycling

Ministers are in danger of “squandering the Olympic legacy and failing to create a healthier and more active” society if the government does not act now to promote cycling, according to a parliamentary committee.
The report by a cross-party committee of MPs and peers said the success of British cyclists at last year’s Olympic Games and the Tour de France “helped cycling catch the public’s attention” but warns that to sustain that interest, the government needs to act to improve safety by changing road layouts, incorporate cycling into road planning and educating children and drivers.
In London, Boris Johnson, the mayor, has said he will boost spending on cycling to £12.50 per head, and there are now twice as many cyclists in the city as there were in 2000. The introduction of a congestion zone that motor traffic must pay to enter in central London and efforts by many of the capital’s boroughs to discourage car use, has seen more people take to bikes in the capital, although safety, as elsewhere in the country, is still a big concern.
MPs call for investment in cycling - FT.com