There have been proposals for the weir in the Byes Park:

We are a group looking to make the most of  the weir on the River Sid near the Old Toll House on Salcombe Road.
We are looking at installing a weir and fish pass. The fish pass will benifit the whole Sid Valley and the Hydro electricity produced will benifit a local school that is situated next to the weir.
The group is in its early stages and welcomes any advice or help.
Please email FOTByes@gmail.com
Thank you.
Groups: Sidmouth Byes Hydro | energyshare - something truly amazing is happening in renewable energy.

Interestingly, there is the balance between provision of energy and looking after the fish.

On the other hand, George Monbiot, in his 'conversion' to nuclear energy, warns of the dangers of over-reliance on renewable energy sources:

March 21, 2011
How the Fukushima disaster taught me to stop worrying and embrace nuclear power. 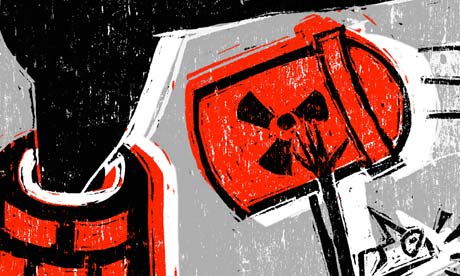 Illustration: Daniel Pudles
By George Monbiot, published in the Guardian 22nd March 2011
You will not be surprised to hear that the events in Japan have changed my view of nuclear power. You will be surprised to hear how they have changed it. As a result of the disaster at Fukushima, I am no longer nuclear-neutral. I now support the technology.
Like most greens, I favour a major expansion of renewables. I can also sympathise with the complaints of their opponents. It’s not just the onshore windfarms that bother people, but also the new grid connections (pylons and power lines).
Like others, I have called for renewable power to be used both to replace the electricity produced by fossil fuel and to expand the total supply, displacing the oil used for transport and the gas used for heating fuel. Are we also to demand that it replaces current nuclear capacity? The more work we expect renewables to do, the greater the impacts on the landscape will be, and the tougher the task of public persuasion.
At high latitudes like ours, most small-scale ambient power production is a dead loss. Generating solar power in the UK involves a spectacular waste of scarce resources(4,5). It’s hopelessly inefficient and poorly matched to the pattern of demand. Wind power in populated areas is largely worthless. This is partly because we have built our settlements in sheltered places; partly because turbulence caused by the buildings interferes with the airflow and chews up the mechanism. Micro-hydropower might work for a farmhouse in Wales; it’s not much use in Birmingham.

And how do we drive our textile mills, brick kilns, blast furnaces and electric railways – not to mention advanced industrial processes? Rooftop solar panels? The moment you consider the demands of the whole economy is the moment at which you fall out of love with local energy production. A national (or, better still, international) grid is the essential prerequisite for a largely renewable energy supply.
Some greens go even further: why waste renewable resources by turning them into electricity? Why not use them to provide energy directly? To answer this question, look at what happened in Britain before the industrial revolution.
The damming and weiring of British rivers for watermills was small-scale, renewable, picturesque and devastating. By blocking the rivers and silting up the spawning beds, they helped bring to an end the gigantic runs of migratory fish that were once among our great natural spectacles and which fed much of Britain: wiping out sturgeon, lampreys and shad as well as most seatrout and salmon(Callum Roberts, 2007. The Unnatural History of the Sea. Gaia Thinking, London.)
Traction was intimately linked with starvation. The more land that was set aside for feeding draft animals for industry and transport, the less was available for feeding humans. It was the 17th-Century equivalent of today’s biofuels crisis. The same applied to heating fuel. As EA Wrigley points out in his new book Energy and the English Industrial Revolution, the 11 million tonnes of coal mined in England in 1800 produced as much energy as 11 million acres of woodland (one third of the land surface) would have generated.
Before coal became widely available, wood was used not just for heating homes but also for industrial processes: if half the land surface of Britain had been covered with woodland, Wrigley shows, we could have made 1.25 million tonnes of bar iron a year. Even with a much lower population than today’s, manufactured goods in the land-based economy were the preserve of the elite. Deep green energy production – decentralised, based on the products of the land – is far more damaging to humanity than nuclear meltdown.

But the energy source to which most economies will revert if they shut down their nuclear plants is not wood, water, wind or sun, but fossil fuel. On every measure (climate change, mining impact, local pollution, industrial injury and death, even radioactive discharges) coal is 100 times worse than nuclear power. Thanks to the expansion of shale gas production, the impacts of natural gas are catching up fast.

Yes, I still loathe the liars who run the nuclear industry. Yes, I would prefer to see the entire sector shut down, if there were harmless alternatives. But there are no ideal solutions. Every energy technology carries a cost; so does the absence of energy technologies. Atomic energy has just been subjected to one of the harshest of possible tests, and the impact on people and the planet has been small. The crisis at Fukushima has converted me to the cause of nuclear power.
George Monbiot – Going Critical
Why Fukushima made me stop worrying and love nuclear power | George Monbiot | Comment is free | The Guardian
.
.
.
Posted by Jeremy Woodward at 15:25