Next door in Dorset, the Butterfly Conservation Society has its base at Lulworth:

Which is also home of the Lulworth Skipper:

But they've been suffering a steady decline, as a report today says:

Fiona Harvey, 23 July 2013
Europe's grassland butterfly population has plummeted in the past two decades, new research published on Tuesday shows, with a near halving in the numbers of key species since 1990.
The precipitous decline has been blamed on poor agricultural practices and pesticides, by the European Environment Agency, which carried out the research. Falling numbers of butterflies are bad news not just for nature-lovers and for biodiversity, but have a knock-on effect on farming, as – like bees – they act as pollinators, and their disappearance harms birds and other creatures that need them for food.
Butterfly populations are a leading indicator of the health of other insect species. The new study therefore suggests many other species of insect, which are also food sources for birds and small mammals, and which play a key role in the health of the countryside, are also under threat.
Scientists from the EEA, the European Unoin's environment watchdog, looked at 17 key species of grassland butterflies, of which seven were common species and 10 more specialist, using data gathered from 1990 to 2011 in 19 European countries. Of the total 17 species, eight have declined, including the common blue, which has suffered a serious fall in numbers; two species remained stable, including the Orangetip; and only one increased. The trend for the remaining six species is still uncertain, including the much-appreciated Lulworth skipper, beloved of butterfly watchers.
Grassland butterflies in rapid decline in Europe | Environment | guardian.co.uk

In which case, we've been asked to help with the Big Butterfly Count:

Warm summer helps butterflies bounce back in the UK 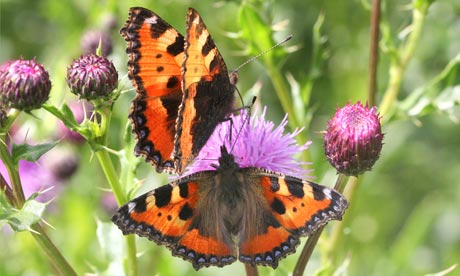 Small tortoiseshell (Aglais urticae) butterflies resting on a flower. Photograph: Ger Bosma/Alamy
The Azores high is seeing small tortoiseshells and meadow brownsreturning to gardens and the countryside in heartening numbers afterbutterflies suffered their worst year on record in 2012.
People are being urged to help measure how these insects are bouncing back in the sunshine by joining the Big Butterfly Count, the world's largest butterfly survey launched on Thursday by Sir David Attenborough and Joanna Lumley for the charity Butterfly Conservation.
Warm summer helps butterflies bounce back in the UK | Environment | guardian.co.uk

“Butterflies are vitally important. Their presence acts as a barometer of the health of our environment. Their ongoing decline tells us that all is not well in the British countryside.

Future generations may not be lucky enough to see butterflies in the same numbers we will experience this summer.

“But, it is not too late. You can help ensure that butterflies still bring that sense of magic to our summertime by taking part in the Big Butterfly Count.
“The Count will tell us if butterflies are recovering after a terrible year and it lets us know how they are faring in our back gardens, parks, fields, towns and cities.
“But more than that, the Count brings us face to face with Britain’s wildlife stars living right under our noses.
“If you care about butterflies make sure you take part in the Big Butterfly Count this summer.”

Butterfly Conservation - Attenborough - "Get Out For The Count"


Find the answers to the top ten most frequently asked questions about butterflies and moths...

1) What is the difference between a butterfly and a moth?

3) I've found a caterpillar. What is it? What shall I do with it?

4) I’ve seen an unusual number of butterflies together. What does it mean?

5) Why do we need to save moths? Don't they eat clothes?

6) I’ve found a butterfly in my house. What shall I do with it?

7) What can I grow in my garden to encourage butterflies and moths?

8) I would like to create a butterfly meadow on my land. Can you advise me on habitat management?

10) My local council are mowing the roadside verges that were full of wild flowers. Isn’t this destroying important habitat for butterflies and moths?

Futures Forum: Sid Meadow in July... and the Big Butterfly Count
.
.
.
Posted by Jeremy Woodward at 13:10