Knowle relocation project: designs for a new building... or... ..."visionary office design and functionality" by retaining, refurbishing and recycling

The question when building something is always whether it is better to build completely anew - or to take what is already there and do something with it.

The Express & Echo has carried a reader's proposed design for the District Council's new HQ:

A FORMER architectural designer is so angry at East Devon District Council’s plans to relocate its HQ from Sidmouth to SkyPark, he submitted his own designs. Keith Konopka from Whimple is vehemently opposed to the council’s bid to relocate to SkyPark, instead of centrally located Honiton, because of its position on the western fringe of the district.

Mr Cohen and council leader Councillor Paul Diviani have long said that the current buildings are “oversized and inefficient” and Cabinet has backed the proposals to move.

In August, Mr Konopka submitted detailed designs of a cellular office layout, and an artist’s impression of a building he thought would suit the authority’s needs, ideally to be situated in Honiton. But in a responding letter, Mr Cohen explained that the council was seeking to relocate to open plan style offices as it has found its current similar environment “inefficient” and “preventing best practice”.

Mr Konopka is now drawing up new plans of an open plan style building which he intends to resubmit. “The most logical place to relocate to is Honiton because it is central,” he said. “But I think the decision was made right at the beginning to relocate to the western edge. I thought I could design something suitable myself and there was always a glimmer of hope they would listen. It is widely known that open plan offices increase stress levels and staff absenteeism and diminish privacy.”

This August Savills estate agents began marketing the 4.67 acre site of its headquarters at Knowle and its Manstone depot in Sidmouth. The sites are being offered for sale by informal tender. The sale of these sites for redevelopment are integral to the council’s ability to fund its planned relocation to SkyPark, the site alone which would cost the council £986,000.

Critics of the council’s relocation bid, including both residents and councillors, have argued that a move from Sidmouth won’t be as cost effective as council officials have stated. Concerns have also been expressed over the viability of locating the council’s headquarters on the fringe of the district.

Capital receipts from the sale of the council’s site at Heathpark in Honiton which includes the East Devon Business Centre which houses 20 businesses, will also be invested in the new headquarters. Heathpark was controversially marketed for supermarket development last year and exchange of conditional contracts for this multimillion-pound sale was described by the council as being “imminent” in June.

Mr Cohen, added: “We really appreciate the time and effort Mr Konopka has spent preparing these drawings and the level of detail. Decisions taken by the council to date have been subject to extensive debate based on detailed reports including options, risk awareness and financial considerations. The location of the new headquarters has yet to be fully determined and firm decisions will only be taken once the true market value of Knowle is understood. Wherever the council locates its new headquarters, it will be open for business for its residents either face-to-face or through better digital services and an appropriate presence across the district.”

An alternative would be to make use of current assets
Futures Forum: Knowle relocation project ... and 'asset renovation'

... and retrofit
Futures Forum: Retrofitting housing to cut down on energy use - the options

... rather than rely on glittering promises:
Futures Forum: Knowle relocation project: and the Skypark fly-through: "Many a contentious proposal has shimmied through the planning process (and on to the sales office) on the back of a series of CGIs, gleaming evocations that are liable to be slight on detail and heavy on seductive gleam."

For a look at the best in 'visionary' design,  Derby City Council has just won a prize for retaining its 1930s facade - whilst doing very innovative things inside:


Is your office as trendy as this?

8 October 2014
The British Council for Offices (BCO) has handed out awards for the "best and most innovative" workplaces in the UK. So, how does your office compare?
The National Awards came after a series of regional awards.
The BCO says the awards represent the best in "visionary office design and functionality" across the country. 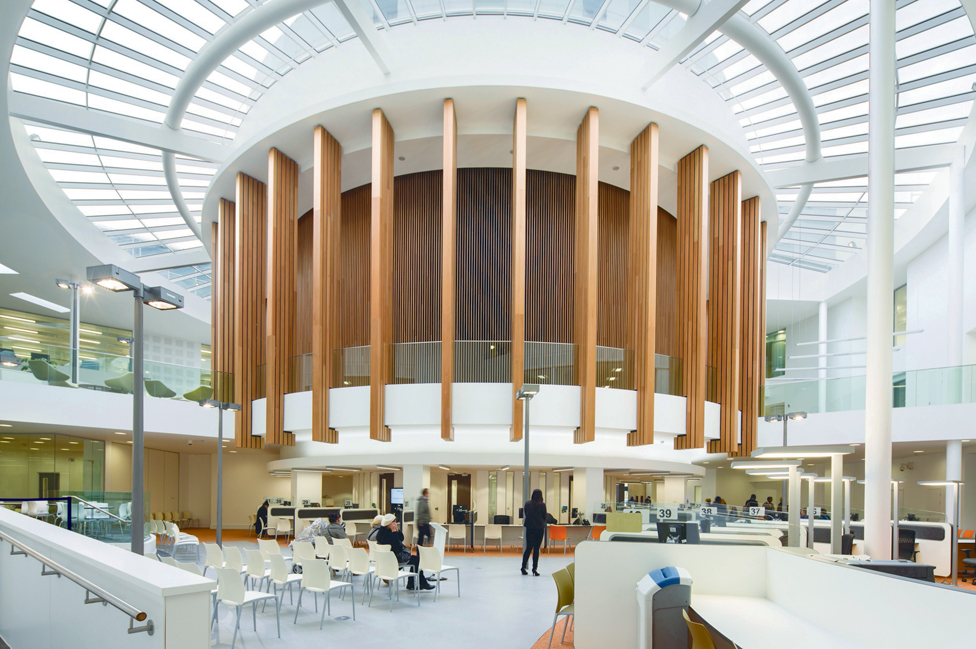 The Council House in Derby won the top award in the refurbished and recycled category. The facade of the locally listed 1930s building was retained and the roofline maintained, but the amount of space on site was increased by over 50%.

BBC News - Is your office as trendy as this?
BCO - British Council for Offices

THE headquarters of Derby City Council has been named as one of the best workplaces in the country.

The Council House, in Corporation Street, was named Best Refurbished/Recycled Workplace at the British Council for Offices' National Awards, which took place in London last night.

The success follows the revamped building's success in the regional awards earlier this year.

In recent years, the 1930s Listed building has undergone a multi-million-pound refit, retaining some of its old features but increasing floor space by more than 50%.