The High Street is actually quite inviting in a town like Sidmouth - with that old-fashioned feel: 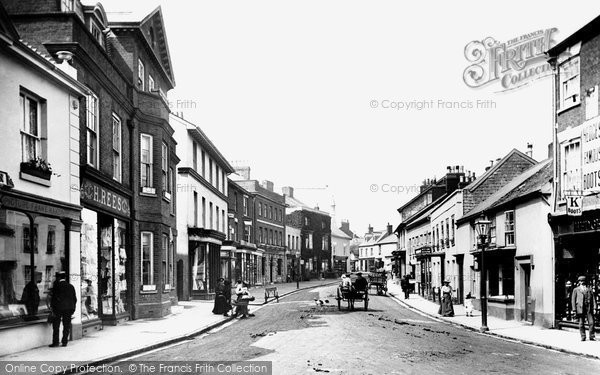 The town's independent retailers are challenging shoppers over the next couple of weeks:

The Herald is supporting the project:

A campaign aimed at boosting independent business and celebrating what makes Sidmouth’s retail experience unique is under way for the third year running
The Christmas Shopping Challenge gives customers the chance to win £200 towards their festive purchases while supporting the local economy.
Twenty-five of the town’s independent businesses are participating this year.
Organiser Claire Jenkins hopes the challenge, which runs until Chritmas Eve, will attract as much interest as it has in the past. She said: “For every £1 you spend with a local, independent business, between 50-70p circulates back into your local economy. Shopping locally supports local traders, their suppliers and the people they depend on to run their businesses.
“Shopping online or out of town may save you a little time, but for every £1 you spend, only five pence trickles back into your local economy. When you shop with your local independents you are doing ‘your bit’ to keep your high street or town ‘open for business’.
“Sadly, it really is a case of ‘use it or lose it’.”
Anyone shopping at one of the participating independent shops will receive a challenge leaflet, which will be marked with a ‘bauble’ for each purchase. After collecting 10 baubles, shoppers will be entered into a prize draw for £200 of vouchers that can be spent locally. The shopping challenge is supported by theHerald, Sidmouth Chamber of Commerce and the town’s representative on Devon County Council, Councillor Stuart Hughes, who provided £150 from his locality budget.
Cllr Hughes said: “I am delighted to support this challenge. Sidmouth is very lucky to have a good range of independent shops, and it’s important that we as residents and visitors to the town continue to support them.”
A full list of participating shops can be found at www.sidmouthindieshops.co.uk. More details in next Friday’s Herald.
Celebrate shopping in Sidmouth with Christmas challenge - News - Sidmouth Herald

The District Council is doing its bit too:

An across-the-board standard parking charge of £2 a day is being introduced across allEast Devon District Council car parks for three months from December 1.
The temporary tariff will not only support local shops over Christmas, but will help boost trade during the traditionally quieter months of January and February.
The move was welcomed by East Devon Chamber of Commerce Chairman Colin Wright who said that he was delighted.
Mr Wright, who is also chairman of the Honiton Chamber of Commerce, said:


We’re very pleased that the district council has once again granted us a very generous concession for car parking.

It was a great success last year – for example I know that the footfall of shoppers in Honiton increased by a considerable amount and extended the shopping time for our visitors and local residents. It’s really great news that the concession is also being extended to the end of February which will also help our businesses.

The parking concession is available after 10am in all East Devon’s 39 pay and display car parks. The 10am start time avoids car parks becoming blocked by commuters and (in the case of Honiton, Axminster and Exmouth) by rail commuters. In addition, anyone buying a £2 ticket after 10am will be able to use the same ticket to park in any other EDDC car park for the remainder of that day.
Councillor Iain Chubb, the council’s Cabinet member for the environment, said:


We understand that our local business communities are competing during the festive season with big city shops and online retailers which is why we are introducing this parking concession.
This is the second year that the concession has been extended to three months and that’s because it proved so popular with our customers last year and we want to thank them for shopping in East Devon.

We do all we can to help our traders and the Chambers of Commerce, particularly at this time of year. For some of our businesses, the Christmas season is when they make enough money to keep them afloat during the quieter months of January and February so this initiative will be a welcome boost for them.