A solution to our plastic problems > scientific research

In fact, the science community has been banging on about it for some time now:
Ocean plastic pollution - what role can social science play? - Institute of Development Studies

Here's the latest from the science journal Nature:
Plastic pollution of the world’s seas and oceans as a contemporary challenge in ocean governance | Nature Communications

There does indeed need to be more research:
Plastics in oceans are mounting, but evidence on harm is surprisingly weak | The Independent

As reported in yesterday's FT:

Cleaning up the oceans rivals climate change as a global problem 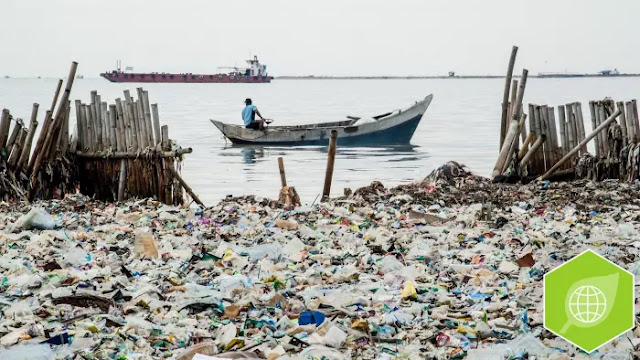 Plastic pollution has risen rapidly up the scale of global environmental concerns over the past year or so. Today many people rate plastic waste, particularly in the oceans, as a problem approaching climate change in its gravity.

Graphic images have raised public consciousness. Photographs have shown some of the world’s most remote beaches that were pristine sand a decade or two ago now covered with plastic litter.

Films and television programmes such as David Attenborough’s immensely popular Blue Planet II series have recorded heart-rending scenes of seabirds and marine creatures dying from plastics that they have mistakenly eaten or from debris entangled around their bodies.

People are also becoming alarmed by reading about the less visible but more pernicious problem of microplastics with dimensions measured in fractions of a millimetre. These come from various sources including the disintegration of larger plastic items, microbeads added to health and beauty products, and microfibres separating from clothing and fabrics during cleaning and laundry. The tiny particles and fibres are ingested by marine wildlife, with adverse consequences that environmental toxicologists are just beginning to investigate.

As the clamour to “do something” rises in volume, politicians are responding with pledges to increase recycling and to reduce unnecessary plastic packaging. At the same time, research funds are starting to move into the field, prompting scientists and engineers to come up with ideas to tackle the problem, both by finding ways to remove existing waste from the oceans and, more importantly, to stem the flow of new plastics into the environment.

Environment
The problem with plastic: can our oceans survive?

Professor Mariana Mazzucato of University College London proposed that Europe’s next Framework research programme should adopt “a plastic-free ocean” as one of its grand challenges.

“This mission could have clear target to reduce the amount of plastic entering the marine environment by 90 per cent, and of collecting more than half of the plastic currently present in our oceans, seas and coastal areas,” she says in a paper commissioned by EU science and innovation commissioner Carlos Moedas.

This would mean stopping at least 7.2m tonnes of plastic entering the marine environment and collecting at least 2m tonnes of annum, the paper adds, concluding that “a very ambitious yet achievable timeline to reach this target would be circa five to 10 years”.

Such a comprehensive attempt to tackle the crisis will require basic and applied research, as well as entrepreneurial innovation. The greatest technological challenge will be removing plastics from the oceans, through nets and booms moving across the sea surface which would gather up and remove or destroy rubbish — all without harming ocean life. The first targets might be the ocean gyres, circulating currents where plastics accumulate, of which the most notorious has become known as the Great Pacific Garbage Patch.

The Ocean Cleanup, a Dutch foundation that is planning to launch a clean-up operation there later this year, estimated in a study carried out from boats and aircraft and published this month that the Patch contains 1.8tn pieces of plastic weighing a total of 80,000 tonnes, covering 1.6m sq km of the North Pacific between California and Hawaii.

“These results provide us with the key data to develop and test our technology,” says Boyan Slat, founder of Ocean Cleanup. “Since the results indicate that the amount of hazardous microplastics is set to increase more than tenfold if left to fragment, the time to start is now.”

The clean-up system is itself made of durable plastic. “It’s quite poetic, like using fire to extinguish fire,” says Mr Slat.

Floating screens extend 3m deep into the sea, suspended from ultra-strong U-shaped tubes 1km long and held in place by a drogue or sea anchor. As ocean currents flow past the screens they collect plastic debris, which can be collected every couple of months by ships for recycling or incineration.

If this year’s trial of the first system goes well, Mr Slat hopes that as many as 60 collectors will be operating in the early 2020s, removing about half of the plastic from the Great Pacific Garbage Patch within five years.

Stopping plastics getting into the oceans in the first place will require a huge change in consumer behaviour and product design — fuelled by a global commitment by governments and business to phase out non-essential single-use plastics, particularly for packaging, and make it easier to recycle remaining plastic waste.

Such a circular economy will require plastic products to have a simple design, in which the different components are easily separated and the polymers from which they are made are clearly identifiable. At present the sorting machinery in recycling plants faces a confusing variety of materials mixed — or, worse, bonded — together.

Polymer chemists will also need to come up with new ways to recycle plastics that are elusive under current technology. A recent paper in the journal Science by Jeannette Garcia of IBM Almaden research centre in California and Megan Robertson of the University of Houston concluded that only two types of polymer are routinely recycled today: PET and polyethylenes, representing just 9 per cent and 37 per cent respectively of plastic production.

Researchers are already developing cost-effective new chemical recycling technologies for other plastics such as polystyrene. Such efforts, the authors say, “raise hope that before long recycling rates for plastics will be much higher than today”.