The last update from the campaign against the proposed industrial estate at Sidford was very pleased with how the Herald reported its recent public meeting - and its very well-supported petition:
Futures Forum: Sidford business park >> campaign group's latest update > "Business park plan: 1,400 sign to say no"

But the headline and story were clearly read by someone at the District Council, who took fright:

It is with much frustration and disappointment that we have to update you on the difficulties that we have encountered in presenting the Campaign's 1,400 signature petition to an elected Member of East Devon District Council.

We had originally been intending to present the petition to a meting of the full Council but we were advised by the District Council's Democratic Services Officer that this was not possible as the petition related to a planning matter.So we were sent in the direction of those who deal with planning issues.

Therefore, we contacted Councillor Howe, as Chair of the District Council's Development Management Committee (the Council's planning committee by another name). At the beginning of last week Councillor Howe said that he was happy to let us present him with the petition and for us to do so publicly in front of Campaign supporters.This was an arrangement that we felt was an appropriate way of submitting the petition.

It was based upon this agreement with Councillor Howe that we reported to the public meeting last Wednesday evening that we were intending to present the petition to Councillor Howe and to arrange it for just ahead of the next meeting of the Development Management Committee which takes place on 30 October.

This proposal received a good reaction at the public meeting and the reporter from the Sidmouth Herald included this in the report of the meeting that made the front page of Friday's edition of the newspaper.As you know we were intending to give wide publicity to this public presentation of the petition.

The Herald was published on Friday morning with details of the public meeting, the petition and our plans to present it to Councillor Howe splashed all over the front page.You can imagine our absolute surprise and upset to receive a telephone call late Friday morning from Councillor Howe.


He explained that he had been given legal guidance from within the District Council informing him that he could not accept the petition on behalf of the Council.

Whilst it was very clear from the telephone conversation with Councillor Howe that this was not his decision but one that he had to follow. We are confident that Councillor Howe acted in good faith when he had originally agreed to accept the petition.

The first question that arises out of this is who within the District Council decided, upon seeing the Herald's front page story to seek to scupper us from presenting the petition to the most senior elected Member of the Council with responsibility for planning matters?

The second question is, what is the District Council so scared of that it has instructed Councillor Howe not to accept a petition from 1,400 local residents who oppose the Business Park planning application? Surely, it's part of local representative democracy that allows campaign groups to present petitions on issues of significant local public interest to senior elected Members? Surely, if Councillor Howe received the petition on behalf of the District Council no one could imagine that doing this would lead him to become biased! If that were the case then getting decisions changed or opposed would be so easy!

We have however been advised that we can hand over the petition to an officer who is within the District Council's planning structure. At this stage we are trying to reach relevant officers in the hope that they would be prepared to do this. But who knows whether they will agree. If they don't, then we would be reduced to placing the petition in an envelope and handing it over the counter at the Knowle.

So much for local democracy! The Chair of the relevant Committee agrees to publicly accept the petition from representatives of the Campaign. We get good local press coverage of this. Then someone within the District Council over rules the Chair. We are then reduced to a low level attempt to handover the petition.

When we were going door to door in the summer collecting the signatures many people said how cynical and mistrusting they were about the District Council. In particular people were annoyed at how planning matters were dealt with and at the lack of transparency there was with District Council processes and decisions.

All of what has happened in recent days does nothing to suggest that the mistrust that those people expressed is misguided.

The 1,400 petition signatories and the other local residents who are opposed to the Business Park will be dismayed at the latest turn of events. The petition reflects a significant set of concerned voices and now attempts are being made to silence these voices.

We are determined to ensure that the petition is lodged with the District Council and it is likely that we will have to do so prior to the planned date of 30 October. We still want to present it publicly and will continue to seek to do so. Unfortunately, the District Council isn't making this easy.

Once we have a better idea of what our next steps will be we will update you further.

The sorry and frustrating saga of trying to publicly present the Campaign's 1,400 signature petition against the planning application to build the Business Park has continued!

* The Chair of the District Council Committee (Development Management) which is responsible for planning matters had early last week agreed to publicly receive the petition from the Campaign.

* On Friday morning the story of the number of signatures obtained on the petition and our intention to present it to the Development Management Committee Chair, Councillor Howe, was splashed across the front page of the Sidmouth Herald.

* Late on Friday morning Councillor Howe said that he had received legal advice from within the District Council which was taht he could not accept the petition from the campaign.

* Yesterday lunchtime Councillor Howe confirmed the legal instruction to him from the District Council.

therefore early yesterday afternoon the Campaign emailed three planning officers, including the Head of Service, asking to arrange to have a public handover of the petition.This was followed up with a telephone call to the Head of Service which resulted in a message being left for him.

At 4.12 pm yesterday the Head of Service responded by email saying -

"I don’t see it as the role of officers to attend a publicity event to receive a petition. We are far too busy considering applications to attend such an event.
I would suggest that you simply hand the petition in at reception or post/e-mail it to us. I would however point out that the timescale for consultation on this application has long since passed and we are free to determine the application. Depending on officers views and whether these concur with the views of ward members and the town council the application could be determined under delegated powers under the constitution. If you wish the petition to be considered before the application is determined then you would be best advised to submit the petition to us as soon as possible.
We intend to discuss how we take the application forward with the Chairman of Development Management Committee tomorrow morning and so if you wish the petition to help to inform that discussion then please submit it imminently".

As you will appreciate this left us with no real option other than to try and get the petition submitted immediately. The last thing that we wanted to do was not to have the petition in the hands of the District Council if a decision on the planning application was imminent as the email seemed to suggest.

So, we had to drive to Sidmouth to get the petition copied for our own records. That meant that we arrived at the District Council Offices at 5.02 pm to find the place shut for the night. The Council's call centre was also closed and so we couldn't speak to anyone one. Even the Chair of the Development Management Committee couldn't raise anyone in planning on the phone.

Luckily we were able to be given access to the building and as no one was in the planning department we left the petition, along with a covering letter, on the desk of the Head of Service's Secretary's desk. We couldn't leave it on his as it was too cluttered!

We are very disappointed at the attitude of the District Council to all of this. We understand that Councillor Howe tried to help us but was over ruled. What is concerning also is the attitude of the planning staff, particularly its Head of Service to our legitimate request to public hand the petition over to him.

We will leave you to draw your own conclusion as to what has gone on at the District Council since the Sidmouth Hearld printed our story on Friday morning.

Below is a photograph of the folder containing the petitions placed on the Council's Head of Service's Secretary's desk at 5.12 pm yesterday. 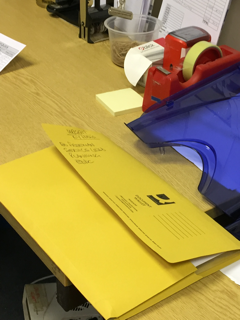