A history of Sidmouth's cottage hospitals

The One Magazine always carries a piece written by the curator of the Sidmouth Museum - which is always of interest, not only because it covers some aspect of local heritage, but because the writer always puts it into context:
East Devon Online Magazine - One Magazine

Here is this month's contribution from Nigel Hyman, reprinted with permission:

In England the first cottage hospital was in Cranleigh,Surrey in 1859. By the 1890s there were at least 300 similar hospitals. Sidmouth opened its first one, May Cottage, in 1885 and, such was its success, in 1892 opened the purpose built Victoria Cottage Hospital.

In 1884 a group of well- known locals formed a committee. They included Mr Field, Mr Trump, the lawyer Mr Radford, his daughter Constance and the much admired Reverend Clements. May Cottage was chosen and subscribers sought. Generous benefactors were Colonel Balfour, Lord of the Manor and the owner of the property, and Annie Leigh Browne who offered to pay rent for the first 5 years. A year later the first floor of the house was converted into an operating theatre and a 4 bedded ward. 21 patients were admitted in the first 12 months and the general public were urged to provide subscriptions of 10s 6d which would allow one patient to be treated in any one calendar year. Cynics felt that this method simply provided a method for wealthy people to ensure that their servants were well looked after. Characteristically Peter Orlando Hutchinson did not subscribe, writing in his diary that he needed all his money to continue building his Old Chancel. 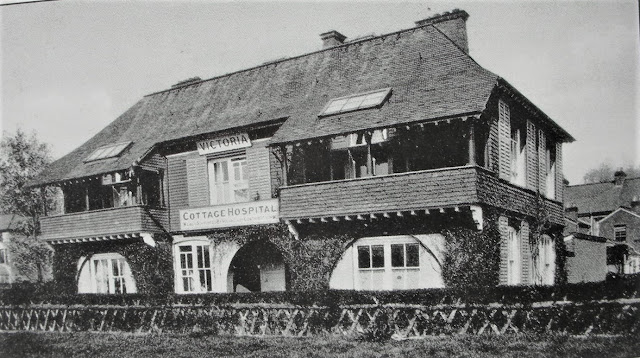 It was apparent that a purpose built hospital was required and once again subscribers found the capital and Colonel Balfour now offered a parcel of his land for the construction. Queen Victoria consented for her name to be used and in 1892 it opened. There were 10 beds and several criteria for admission. It was specifically for ‘poor persons’ without infections and, specifically, without consumption (tuberculosis). Injuries were accepted but those with ‘chronic’ disease and mental disorders had to look elsewhere.

Figures from the 1920s show that inpatient numbers were fairly static at 200/year with a total of about 100 operations. Curiously, annual outpatient visits fell from a peak in 1921 of 1200 to little more than 100 a decade later. Clearly the main focus was on ward care.

‘Ownership’ of the hospital was very important and fund raising was continual. When the Duke of Connaught, Queen Victoria’s son, chose Sidmouth as his winter quarters in the early 1930s he unsurprisingly found himself patron of the Hospital.

The value of ‘cottage’ hospitals has been debated from the Victorian period to the present day. Aneurin Bevan, who presided over the birth of the NHS, said: ‘Although I am not a devotee of bigness for bigness’s sake, I would rather be kept alive in the efficient if cold altruism of a large hospital than expire in a gush of warm sympathy in a small one.’

Counterintuitively there is contemporary evidence to suggest that mortality after surgery is proportionate to the size of the hospital. This may reflect reduced rates of infection. Although difficult to quantify, the ‘homely’ feeling, the quiet environment and the ease with which relatives and friends can visit must all contribute to a patient’s well- being.

Sidmouth Museum closes on December 8 and reopens on March 22 2019.