Brexit: and Norway saying no to the UK's Norway-plus plan

But the Norwegians have to say yes to the UK joining EFTA: 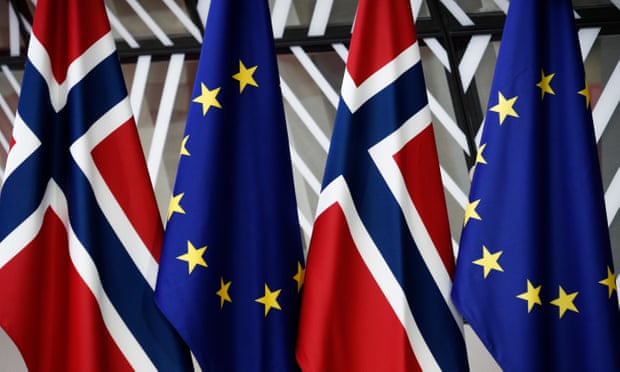 Senior Norwegian politicians and business figures have rejected Norway-plus, the increasingly touted British cross-party plan for the UK to leave the EU but join Norway in a free trade trade area inside the EU single market.
They attacked the idea as “neither in Norway nor the UK’s interest”. The UK would need Norway’s permission to join its Efta club.
The rejection is a blow to an influential cross-party group led by the Tory MP Nick Boles, with private cabinet support, that is looking for a plan B if, as expected, MPs reject Theresa May’s deal next Tuesday.
The former Labour foreign secretary David Miliband and the Tory former universities minister Jo Johnson also condemned Norway-plus as throwing away a key advantage of current membership “in the form of our vote, voice and veto around the table”.
The former ministers’ joint assault on Norway-plus, in a pamphlet written by the People’s Vote campaign, is in some senses confirmation that the Boles plan could become a credible rival to a second referendum as a MPs search for a way out of a potential Commons deadlock.
The two men insist Norway-plus “would not be easy to negotiate, would not mean reduced payments to the EU and would not allow the UK to end freedom of movement for migrants from the EU”.
Speaking on BBC Radio 4’s Today programme, Johnson said: “Norway-plus does not deliver on the referendum since it would reduce the UK to a nation of lobbyists camped outside the European parliament in Brussels.” Describing such an outcome as undignified and the worst of all worlds, he said it would only add to a sense of deceit for voters who had backed Brexit.
People’s Vote claims that at a time when trust in politics is at low point, it is better to confront voters with the true choices on offer, rather than “repeating the deeply misleading promises made for Brexit two years ago”, Johnson said.
But Stephen Kinnock, one of the Labour advocates for Norway-plus, said the Efta court could diverge from the European court of justice, and that the Efta treaty allowed for an emergency brake on migration in exceptional circumstances. He claimed as many as 10 cabinet ministers backed a pivot to Norway-plus after the expected Commons defeat next week, and urged May to take up this option.
Any attempt to push through May’s deal or a second referendum was deeply risky, he said.

Norway-plus, the softest form of Brexit, requires the UK to seek to apply to join the European Free Trade Area grouping, consisting of Norway, Iceland and Liechtenstein. The scheme, as revised by Boles, would require the UK also to remain in the EU customs union indefinitely, or at least until a solution to the border in Ireland could be found.
But the plan was rejected by Heidi Nordby Lunde, an MP in Norway’s governing Conservative party, and leader of Norway’s European movement. She said her views reflected those of the governing party even though the Norwegian prime minister, Erna Solberg, has been more diplomatic by saying Norway would examine a UK application.
Lunde told the Guardian: “Really, the Norwegian option is not an option. We have been telling you this for one and a half years since the referendum and how this works, so I am surprised that after all these years it is still part of the grown-up debate in the UK. You just expect us to give you an invitation rather than consider whether Norway would want to give you such an invitation. It might be in your interest to use our agreement, but it would not be in our interest.”
Explaining Norway’s fear of the UK joining the Efta club, she said: “The three countries in Efta have to agree on all the regulations coming from the EU, so if one country vetoes something we all have to veto, which means that if the UK enters the Efta platform and starts to veto regulations that we want, this will affect not just the UK but also us as well. Part of the success we have had with this EEA agreement is for the last 25 years is that we do accept the rules and regulations that do come out of the EU, mostly because it is in our interest.
“If, as I understand, UK politicians do not want to be ruled by regulations coming from other countries, why would they accept a country with 38,000 citizens like Liechtenstein being able to veto regulations that the UK wants. That would be the reality.”
A member of the parliament’s economic affairs committee, she said “it is not in my country’s interests to have the UK aboard, and I cannot see how possibly an EEA/Efta agreement could be in the interests of the UK”.
“As part of the agreement with the EU we accept migration and free movement, we have our own body of justice, but it is compliant with the European court of justice. We accept the rules and regulations of the single market.”
She added: “It is not an option for the UK to stay inside the customs union, as the UK proposes to solve the Northern Ireland border issue, if you are part of the Efta platform, since Efta is its own free trade bloc. We have 29 trade agreements with 39 countries outside the EU that the UK would need to be able to accept. I do not understand why it would be in the UK interests to enter into trade agreements on the basis of agreements that have been negotiated in our interests and not the UK’s.”
She said the only politicians in Norway who wanted the UK to join Efta were the Eurosceptic party that wanted to destroy Norway’s relationship with the EU.
Her fears have been echoed by Ole Erik Almlid, of the Confederation of Norwegian Enterprise business association, who has also questioned whether the UK would be willing to go from rule maker to rule taker. He said Norway would suffer and parts of the Efta agreement with the EU would have to be suspended if an Efta member such as the UK refused to abide by the obligations in the agreement.