Brexit: and the Norway model

One of the motivations to vote leave was to 'get rid of unnecessary regulation':
Futures Forum: Brexit: and a bonfire of EU red tape

And one particular area of 'red tape' has been around fishing:
Futures Forum: Brexit: and "taking back control" of fishing waters

Indeed, Iceland and Norway seem to have done very well outside the EU:
Iceland's fishing industry 'better off outside' EU - BBC News
Norway is 'perfect example' of how being outside the EU is better | Politics | News | Express.co.uk

Or perhaps not:
Brexit could leave Britain with the worst of both worlds - like Norway | Coffee House

And is Norway's model really the one to go for?
How Norway's relationship with the EU has split views - BBC News

This blog considered the question a couple of weeks ago:
Futures Forum: Brexit: and the 'fax democracy' option

Here is a more recent view from the Financial Times:

What Britain can learn from Norway about life outside EU 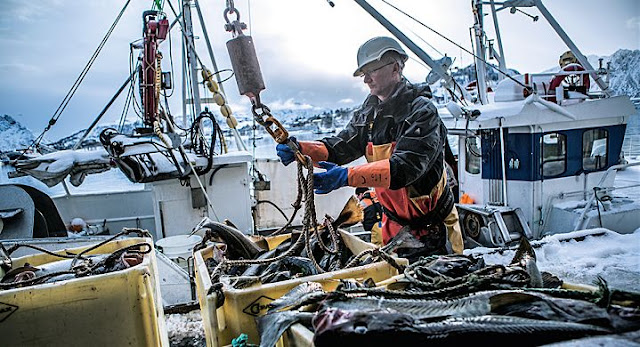 by: Richard Milne, Nordic correspondent
When Sverre Soraa’s seafood company exports fish to the EU from its base in Norway, it faces a number of tariffs. The 2 per cent it is obliged to pay to export raw salmon, trout or herring is fine, says Mr Soraa, chief executive of Coast Seafood, based in Maloy on Norway’s west coast.
The pain comes when he wants to sell processed products such as smoked salmon or salted fish. “When you want to make value-added products — or if you want to add some taste, some salt or sugar — it’s a different story,” he says, explaining that a tax of 13 per cent applies to exports of smoked salmon.
This is because Norway is outside both the EU and the customs union. Much of Norwegian industry is inside the EU’s single market by virtue of Norway’s membership of the European Economic Area, which provides market access in return for adopting EU rules without any say in shaping them.
But for British businesses wondering what life might be like after a so-called “hard” Brexit, Norway’s fishing sector — which was excluded from the EEA agreement and so is not part of the single market — offers some insight.
Mr Soraa, who co-founded Coast Seafood in 1994, says the tariffs hold back the Norwegian industry. There is little work done on processing fish in Norway other than for domestic consumption. Instead, Norwegian companies often buy businesses elsewhere in the EU so that they can get around the high taxes.

Another result, he says, is that Norwegian fish companies have to “work harder” to find export markets. Coast Seafood’s biggest market for mackerel is Japan. One of the most important destinations for Norwegian salmon was China until a dispute over the awarding of the Nobel Peace Prize to a Chinese dissident cost Norway an estimated $1bn in lost exports.
“You are outside [the EU] and, when you are outside, that is how it is,” says Mr Soraa.
Still, the EU is the largest market for Norwegian seafood, with 1.5m tonnes sold in 2016, up 23 per cent on the year before, according to the Norwegian Seafood Council.
All other Norwegian industries — aside from agriculture — enjoy the relative comfort of being inside the single market.
More than three-quarters of Norway’s exports go to the EU — a higher proportion than the UK’s — while two-thirds of foreign direct investment comes from the bloc. “For our companies, it has really been essential that Norway has been part of the internal market,” says Tore Myhre, director of the international department at NHO, the Confederation of Norwegian Enterprise.
But even this status sheds light on what the UK could expect if it decides to pursue a so-called “soft Brexit” that keeps a foot in the single market. Norwegian businesses outside fishing and agriculture are subject to all the same regulations as EU companies because of the EEA agreement. Yet Norway has no real say in the drafting of those regulations, often being forced to lobby late in the day and outside the negotiating room even for its biggest industries such as oil and gas.
One example of this predicament is provided by the new European rules on offshore helicopter safety. The Norwegians fear that implementing the EU regulations could lead to a watering down Norway’s existing strict standards. Despite a fatal accidentlast year, Norwegians remain proud of their safety record and so Oslo, for perhaps the first time ever, has said it will not implement the EU rules.


Related article
Brexit: what Britain can learn from Norway
EEA membership works for Norwegians but might not for the British, says Karen Helene Ulltveit-Moe

Similarly, the EU is insisting that a 2013 directive on offshore safety — drafted after the Deepwater Horizon disaster in the Gulf of Mexico — should apply to Norway, including rules on oil companies’ financial readiness for accidents and rights for whistleblowers. Norway instead argued that the rules did not apply to its waters, were unnecessary and could undermine its own safety standards.
Further examples abound in other industries — rules on energy efficiency standards for makers of central heating boilers forced some companies to make multimillion investments overnight to keep up with the regulations. “The companies, they are just waiting to see what will happen. In the offshore sector, they are quite worried as it’s so uncertain,” says Mr Myhre.
Many of Norway’s top business people and politicians have been mystified by the UK’s desire, expressed by the current Conservative government, to leave the single market. “I think you would struggle to find a single Norwegian CEO who thinks it is a good idea to be outside the single market — it helps us a lot to compete with rival companies in Sweden or elsewhere,” says one Norwegian industrial leader.
Mr Myhre sums up what Norwegian business’s recommendation would be: “The advice would be that when you negotiate with the EU, try to get the closest possible relationship with the internal market.”

What Britain can learn from Norway about life outside EU
.
.
.
Posted by Jeremy Woodward at 07:29