District Council gives way in Sidford over affordable housing: “Under government guidance, we are required to reduce our requirements where a development is unviable and so we have no real choice but to accept this position.”

The developer at Knowle is appealing in its application to build housing for the elderly:
Futures Forum: Knowle relocation project: PegasusLife grounds of appeal

And applied to do so a year ago:
16/0867/MFUL | Demolition of former residential care home and construction of 36 sheltered apartments including communal facilities, access, car parking and landscaping. | Green Close Drakes Avenue Sidford Sidmouth EX10 9JU

But the proposals met with a refusal:
Developer’s offer slammed as ‘insult to Sidmouth’ - Sidmouth and Ottery breaking news and sport - Sidmouth Herald

The hearing will be heard on Wednesday at the Town Council: 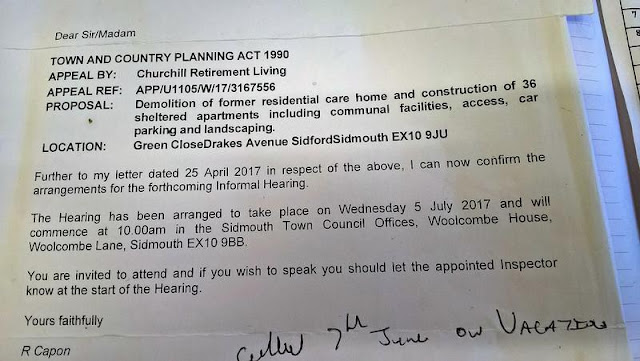 However, the District Council has not left itself much room: “Under government guidance, we are required to reduce our requirements where a development is unviable and so we have no real choice but to accept this position:” 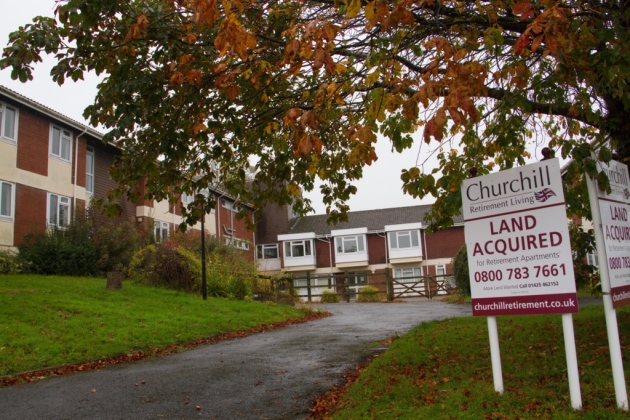 Documents show plans to create 36 sheltered apartments for the elderly should be worth nearly £1million to the Sidmouth community – but the developer has shown it is ‘unviable’ to pay more than £41,000. 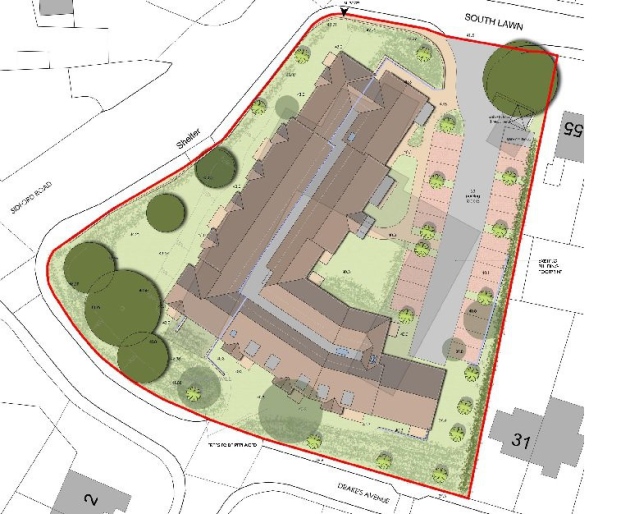 How the redeveloped Green Close could look
Churchill Retirement Living hopes to demolish the former Green Close care home in Drakes Avenue to make way for the development.
Its five-figure offer towards off-site ‘affordable’ housing was slammed as an ‘insult to Sidmouth’ by town councillors, who suggested the developer should pay at least £360,000.
After failing to reach an agreement with East Devon District Council (EDDC), Churchill launched an appeal due to non-determination of its application.
Papers submitted to the appeal process from EDDC say there is a policy expectation that half of the site should be provided as ‘affordable’ housing and that there is a ‘substantial’ need for one- and two-bedroom units in Sidmouth.
If 18 ‘affordable’ homes cannot be provided on-site, a payment of £935,201 would be expected so the properties can be built elsewhere.
Churchill said a viability assessment showed building ‘affordable’ homes on the site was ‘impractical’ and ‘unrealistic’.
It added: “It has been demonstrated that the application development is not sufficiently viable to permit the imposition of any affordable housing or planning gain contributions above £41,208.”
An EDDC spokeswoman said: “Unfortunately, the development is not sufficiently viable to pay this [£935,201] sum and, following an independent assessment of the viability of the scheme, it was reluctantly accepted that the scheme could only afford to pay £41,208 towards affordable housing.
“Under government guidance, we are required to reduce our requirements where a development is unviable and so we have no real choice but to accept this position.”
EDDC also expected Churchill to pay £22,536 for habitat mitigation, plus an £18,400 public open space contribution. The total is nearly £1million.
The delay in EDDC deciding the fate of the application was due to officers trying to apply an ‘overage’ clause that would require Churchill to pay up if its profits exceed current expectations.
A Planning Inspectorate spokesman confirmed that the appeal had been validated and it is in discussion with both parties.
EDDC wants £1million in community cash - developer offers £40,000 - Latest Sidmouth and Ottery News - Sidmouth Herald
Oh, those poor, poor developers with their begging bowls | East Devon Watch

It's all about the 'viability' or otherwise of a project:
Futures Forum: "Stop highly profitable developers gaming the system" >>> "Reduce the power of viability assessment studies and give councils the hard cash to start building houses again."
.
.
.
Posted by Jeremy Woodward at 15:57