Plans for Port Royal: anticipating a Regeneration Board >> Scoping Study consultation >> "a stitch-up"

All sorts of questions are being asked of the proposals for Port Royal:
Futures Forum: Plans for Port Royal: anticipating a Regeneration Board >> Scoping Study consultation >> "What is the purpose of this extra capacity?"

The latest take up the letters page of the Herald: 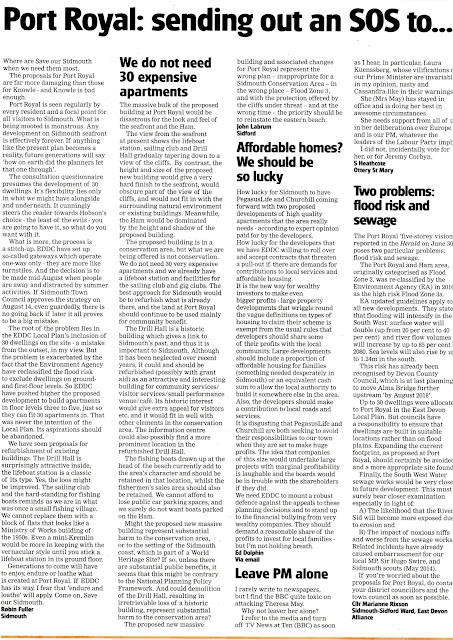 Here is the lead letter in full:

Where are Save our Sidmouth when we need them most.

The proposals for Port Royal are far more damaging that those for Knowle - and Knowle is bad enough.

Port Royal is seen regularly by every resident and a focal point for all visitors to Sidmouth. What is being mooted is monstrous. Any development on Sidmouth seafront is effectively forever. If anything like the present plan becomes a reality future generations will say 'how on Earth did the planners let that one through'.

The consultation questionnaire presumes the development of 30 dwellings. It's flexibility lies only in what we might have alongside and underneath. It cunningly steers the reader towards Hobson's choice - the least of the evils - you are going to have it, so what do you want with it.

What is more, the process is a stitch up. EDDC have set up so called gateways which operate one-way only - they are more like turnstiles. And the decision is to be made mid-August when people are away and distracted by summer activities. If the Sidmouth Town Council approves the strategy on 14 August, even guardedly, there is no going back if later it all proves to be a big mistake.

The root of the problem lies in the EDDC Local Plan's inclusion of 30 dwellings on the site - a mistake from the outset in my view. But the problem is exacerbated by the fact that the Environment Agency have reclassified the flood risk to exclude dwellings on ground and first floor levels. So EDDC have pushed higher the proposed development to build apartments in floor levels 3 to 5, just so they can fit 30 apartments in. That was never the intention of the Local Plan. Its aspirations should be abandoned.

We have seen proposals for refurbishment of existing buildings. The drill hall is surprisingly attractive inside, the lifeboat station is a classic of its type. Yes, the loos might be improved. The sailing club and the hard standing for fishing boats reminds us we are in what was once a small fishing village. We cannot replace them with a block of flats that looks like a Ministry of Works building of the 1950s. Even a mini-Kremlin would be more in keeping with the vernacular style until you stick a lifeboat station in its ground floor.

Generations to come will have to enjoy, endure or loathe what is created at Port Royal. If EDDC has its way, I fear that 'endure and loathe' will apply. Come on, Save our Sidmouth.

Also, via the Save Our Sidmouth site:

We do not need 30 expensive apartments

The massive bulk of the proposed building at Port Royal would be disastrous for the look and feel of the seafront and the Ham.

The view from the seafront at present shows the lifeboat station, sailing club and Drill Hall gradually tapering down to a view of the cliffs. By contrast, the height and size of the proposed new building would give a very hard finish to the seafront, would obscure part of the view of the cliffs, and would not fit in with the surrounding natural environment or existing buildings. Meanwhile, the Ham would be dominated by the height and shadow of the proposed building.


The proposed building is in a Conservation Area, but what we are being offered is not conservation. We do not need 30 very expensive apartments, and we already have a lifeboat station and facilities for the sailing club and gig club. The best approach for Sidmouth would be to refurbish what is already there, and the land at Port Royal should continue to be used mainly for community benefit.
The Drill Hall is a historic building which gives a link to Sidmouth’s past, and thus it is important to Sidmouth. Although it has been neglected over recent years, it could and should be refurbished (possibly with grant aid) as an attractive and interesting building for community services / visitor services / small performance venue / café. Its historic interest would give extra appeal for visitors etc, and it would fit in well with other elements in the Conservation area. The information centre could also possibly find a more prominent location in the refurbished Drill Hall.

The fishing boats drawn up at the head of the beach currently add to the area’s character and should be retained in that location, whilst the fishermen’s sales area should also be retained. We cannot afford to lose public car parking spaces, and we surely do not want boats parked on the Ham.

The proposed new massive building and associated changes for Port Royal represent the wrong plan – inappropriate for a Sidmouth Conservation Area – in the wrong place – Flood Zone 3, and with the protection offered by the cliffs under threat – and at the wrong time – the priority should be to reinstate the Eastern beach.

And from a District Councillor:

The Port Royal ‘five-storey vision’, reported in the Sidmouth Herald on 30th June 2017, poses two particular problems: flood risk and sewage. The Port Royal and Ham area, originally categorised as Flood Zone 2 was re-classified by the Environment Agency (EA) in 2016 as the high risk Flood Zone 3a.

EA updated guidelines apply to all new developments. They state that flooding will intensify in the South West: surface water will double (up from 20% to 40%) and river flow volumes will increase by up to 85% by 2080. Sea levels will also rise by up to 1.24m in the south.

This risk has already been recognised by Devon County Council which is at last planning to move Alma Bridge further upstream ‘by August 2018’.

Up to thirty dwellings were allocated to Port Royal in the East Devon Local Plan. But Councils have a responsibility to ensure that dwellings are built in suitable locations rather than on flood plains. Expanding the current footprint, as proposed at Port Royal, should certainly be avoided and a more appropriate site found.

Finally, the South West Water sewage works would be very close to future development. This must surely bear closer examination especially in light of:

A). The likelihood that the River Sid will become more exposed due to erosion and
B) The impact of noxious niffs and worse from the sewage works. Related incidents have already caused embarrassment for our local MP, Sir Hugo Swire, and Sidmouth scouts (May 2014).

If you’re worried about the proposals for Port Royal, do contact your District Councillors and the Town Council as soon as possible.


Is the Port Royal ‘five-storey vision’ blind to flood risk and sewage? | Save Our Sidmouth
.
.
.
Posted by Jeremy Woodward at 08:38