"Austerity has been presented as a necessary evil. It’s not."

Where 'austerity' now? This is from December 2015:
Futures Forum: “The politics of austerity have been shown to be a huge failure. The principal victims of that failure are the citizens, but another victim is social democracy, which has lost its traditional political space.”

Are we seeing a return to Keynes and social democracy? Again, this is from December 2015:
Futures Forum: The decline of social democracy, the rise of austerity and the promise for local politics

This weekend, the Telegraph is saying we should hold firm:
Now is the time to hold our nerve on austerity - Telegraph

But it might be over anyway:
Austerity: Is it really over? All you need to know explained in 5 minutes | The Independent

Paul Krugman in the Independent doesn't think much of it:
Spare us these cockroach arguments in favour of continued austerity | The Independent

And the IMF isn't too sure either:
Even the IMF says austerity doesn’t work. It’s the zombie idea that will not die | Phil McDuff | Opinion | The Guardian

Here's a recent piece in the New European:

Austerity has been presented as a necessary evil. It’s not 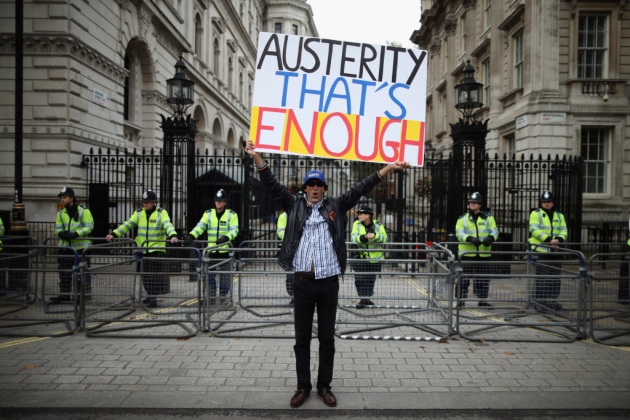 It doesn’t have to be this way

Since the Coalition government took power in 2010, we’ve been told that austerity is a necessity rather than a choice. After the financial crash, drastic efforts were made to reduce public spending. The slashing of education, healthcare, social care, in-work and out-of-work benefits and transport – to name just some of the public services affected – has been justified as an essential measure to “balance the books”.
Proponents of these spending cuts will often nod sympathetically as critics discuss their human cost. Homelessness has doubled since 2010. Child poverty has risen year on year, so that almost a third of young people are now classed as poor. More than 350 Sure Start centres have closed. Vulnerable elderly people are forced to wait for more than six months to receive support with basic tasks such as washing, dressing, cleaning and cooking. It’s all very sad, austerity enthusiasts will agree, but tough choices have to be made. There’s nothing humane about saddling future generations with unmanageable public debt.
The analogy of a household budget is used to explain why it’s necessary to reduce the deficit as quickly as possible. The same way you’d quickly find yourself in financial difficulty if you regularly spent more than you earned and charged everything to credit cards, it’s argued. A country must learn to live within its means. The political expediency of this comparison is obvious. It resonates with people’s everyday experiences. It makes intuitive sense and is easy to understand. There’s just one major drawback: national economies aren’t, in reality, that similar to household budgets.
What it’s advocates need to admit is that even according to their own criteria, the austerity of the last several years has failed. While the UK’s budget deficit has fallen since its peak in 2009-2010, it’s still larger than that of most advanced economies. And though public spending has been slashed in real terms, it’s barely changed when measured as a share of national income.
There’s now a fairly widespread consensus amongst economists that austerity has stunted economic growth – in the UK and in every other country that has similarly attempted it. All the way back in 2012, IMF chief economist Olivier Blanchard issued what basically amounted to an apology for his organisation’s prior stance. Though it never claimed that austerity would actually increase growth, the IMF believes it underestimated the damage cuts cause to a weak economy.
If we are going to use a household budget analogy, perhaps it can be adapted like this: spending on things like education, healthcare and infrastructure is not akin to making frivolous purchases of designer clothes, expensive holidays and fancy dinners. It’s more like buying yourself a suit to wear to job interviews, or paying university tuition fees. Done right, it’s a smart investment in your future. Spending now increases your future earning potential – and once your income is higher you have no problem paying the loans off.
This is still an imperfect, over-simplistic parallel, but it’s enough to illustrate the shortsightedness of austerity thinking. The UK’s productivity lags way behind that of most other advanced economy. In the period of time a British worker generates £1 of GDP, a German worker generates £1.35. What’s frustrating is how entirely predictable this was. If you refuse to invest properly in education and training, you end up with an under-skilled workforce with lower productive capacity. If you fail to provide affordable commuter transport options, or build sufficient housing in the right places, people aren’t able to access jobs.
There are a whole range of policies the government could pursue in order to promote growth. With interest rates at a record low, borrowing to fund investment is entirely feasible. Government investment in housing, green energy, health, transport and other areas has obvious intrinsic benefits. It would also create jobs and stimulate private investment. Basic Keynesian economics tells us that running a short-term budget deficit during periods of economic downturn is a good thing. When things are looking brighter, the national debt can be paid off.
What’s different is a structural deficit – where spending outstrips tax intake in times of boom and bust. Because the UK has an ageing population, the cost of pensions, adult social care and healthcare is constantly increasing. The situation certainly hasn’t been helped by the infliction of austerity, which has only damaged the economy and consequently decreased government revenues, but it’s a problem with no quick-fix solution.
Both main parties agree that tax rises are necessary in order to fund our welfare state – the main disagreement is about who they should hit. During the last general election, Labour promised to increase taxes only on the top 5% of earners. The Conservatives, in contrast, ruled out increases for high earners but refused to comment on whether middle and low income individuals would be affected.
This feels indicative of the parties’ respective approaches. Not only has austerity failed on its own terms, spending cuts have disproportionately targeted the poorest and most vulnerable members of our society. Nothing about the regime of the past seven years was necessary or unavoidable. It’s maddening to watch the Conservatives double down on their mistakes and insist, as Chancellor Philip Hammond has, that the disastrous austerity experiment is still not over. For the good of the country, change cannot come soon enough.
Austerity has been presented as a necessary evil. It’s not - Top Stories - The New European
.
.
.
Posted by Jeremy Woodward at 15:44