The trouble is, of course, that the world of jobs is changing:
Futures Forum: The changing value of work

And most of the promises made are looking very empty indeed:
Futures Forum: The demands for "more jobs, equal pay for equal jobs, and more pay for every job" are beside the point, as they are "not worth a damn to begin with"

Here are some questions raised in a recent piece in the Baffler magazine:
click on the link for the full article:

Breaking the spell of the Protestant ethic 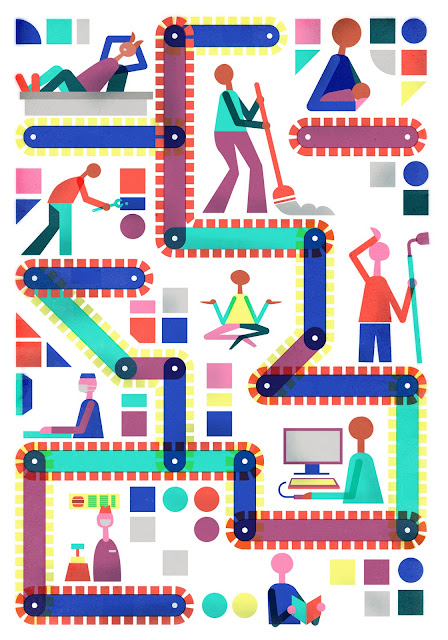 
LAST YEAR WE KEPT HEARING that Bernie Sanders and Donald Trump were marginal figures of the left and right—over here an avowed socialist, over there a fan of “alt-right” idiocies—and that neither would stand a chance in the general election. It turns out we heard wrong. Each represented the programmatic mainstream of his party as it had evolved in response to Occupy and the Tea Party. And that mainstream was constituted by equal parts nostalgia for “good jobs” and commitment to “full employment,” often sprinkled with a new ingredient, the suspicion and resentment of elites.
How can the left and the right be devoted to the same universal remedy—“Get a job!”—for what ails us? (In this case, the sickness started with the breakdown of the labor market along with all others in the slow-motion economic collapse that began in October 1987, not in 2000 with the dot.com bust, nor in 2007 with the Great Recession.) This consensus seems both impossible and inevitable. Impossible because nobody agrees on who the “job creators” are, government deficits or private investors; inevitable because everyone, left to right, somehow agrees that work is essential to human dignity and individual achievement.
The great irony here is that both sides are heirs to the Left-Hegelian intellectual tradition, which, under Karl Marx’s auspices, designated the compulsion to work as the trans-historical element of human nature. “Hegel takes the standpoint of modern political economy,” as the young Marx put it in 1844. “He grasps labor as the essence of Man.” Marx knew full well that Hegel himself had named Luther the founding father of modernity because Protestantism sanctified work as the wellspring of grace. In this sense, the Protestant ethic still regulates most debates about the future of work.

Everybody wants to put us back to work. The left demands “full employment,” and the right answers by chanting “jobs, jobs, jobs.”

Why reinstate the ego ideal of the bourgeois individual, rather than ask—as both Weber and Freud did—whether it’s adequate to our present historical condition?

More to the point, why does the left want to restore the ego boundaries determined by the emotional austerity and psychological renunciations that work requires and reproduces? Why reinstate the ego ideal of the bourgeois individual, rather than ask—as both Weber and Freud did—whether it’s adequate to our present historical condition?
Intellectuals on the left still conceive of work in the same way that Luther, Hegel, and Marx did, as the “essence” of human nature, as the setting in which genuine selfhood is enacted. How else to explain their devotion to the transcendent value of socially necessary labor? In this crucial sense, the left, no less than the right, is still committed to the bourgeois virtues—and to their material framework, a self-regulating market where no firm is “too big to fail.” The right has fetishized love as sanctified by marriage and the family: keep working at it! The left has fetishized work as such. As always, Freud’s exaggerations about love and work have come true, thus confirming Adorno’s judgment of psychoanalysis—that only its hyperbole was accurate.
The question is, what happens if we dispense with this bourgeois conception of work and the ego ideal that attends it? Instead of repatriating work from overseas, or reclaiming factory labor from the robots on the shop floor, or increasing public spending to create full employment, what if we said, fuck work? Or, more politely: “We prefer not to. Work and life are not the same thing. And now that work matters less in the making of our character because socially necessary labor is, practically speaking, unavailable, we can create lives less burdened by its demands.”
Then, and only then, will we be able to address the real questions: How to detach income from work without hating ourselves, the recipients, for doing so? How to justify getting something for nothing—receiving income and consuming goods without producing anything of value? How to build individual character in the absence of real or meaningful work that pays a living wage? What is meaningful work, anyway?
And how to pay for a civilization no longer constrained by the imperatives of material scarcity—how to distribute income when the problem of production has been solved and the labor market can no longer allocate resources rationally? How to get beyond the austere moral universe of bourgeois society, which still regulates its corporate successor, that baroque stage of capitalism we call post-industrial society?
My answers turn on the history of work and the recent decline of socially necessary labor. The meaning and significance of work have already changed fundamentally. The possibilities of increasing and using leisure time have meanwhile increased exponentially. To ignore these facts is to remain trapped in the gravitational field of classical social theory—from Hegel to Freud via Marx—and to make work a fetish. It’s also, not incidentally, to dismiss the moral promise and the historical momentum of a society that is passing beyond necessary labor, “the realm of necessity,” on its way toward a new kind of freedom, a new version of genuine selfhood.
The future of selfhood and society is written in what we now think about the meanings of work. Either we continue to treat it as the source of both character and income—let’s reconvene the American Dream!—or we find ways of developing individual moral capacities and allocating economic resources outside the market in labor.
We don’t have much of a choice. We’ve already changed the address of our moral personalities—where we recognize and realize our capacities as individuals, where we make choices—from the supply side to the demand side, which is to say from work to leisure, from production to consumption. It’s time we explored this new side of town. By now, we can’t afford not to.
James Livingston is a professor of history at Rutgers University and the author of No More Work: Why Full Employment Is a Bad Idea.


Why Work? | James Livingston - The Baffler

No More Work: Why Full Employment Is a Bad Idea - YouTube

With a couple of reviews:
Workaday Woes | Stuart Whatley - The Baffler
A World Without Work - The Atlantic