Continuing to collect plastic, 'thereby making it easier for householders to recycle' - although the District Council 'cannot guarantee it will be recycled'

There has been criticism of the new rubbish-collection and recycling regimes in Devon:
Futures Forum: "Poor quality of waste collected" in Devon
Futures Forum: "Rubbish rubbish collection" in East Devon

A problem is that stuff is getting into recycled materials which shouldn't be - and so it ends up being rejected:
Futures Forum: Trying to improve the quality of recycled waste

The District Council admitted as such to the Herald: 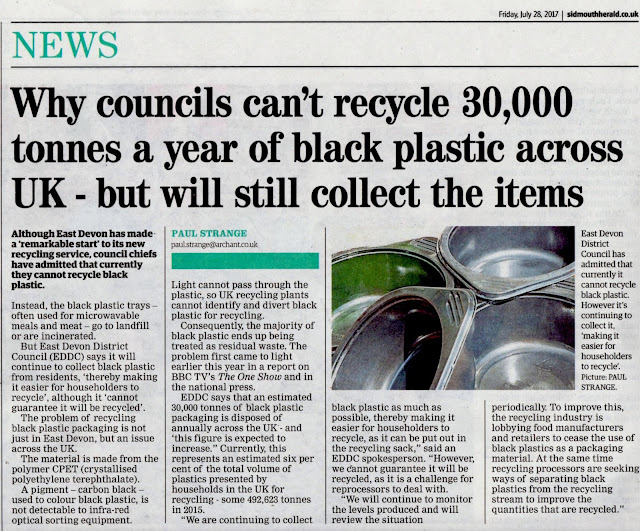 This piece appeared on-line earlier in the month:
Why black plastic can’t be recycled by EDDC - Honiton, Axminster and Seaton news - Midweek Herald

Here is the story as reported on the One Show earlier in the year: 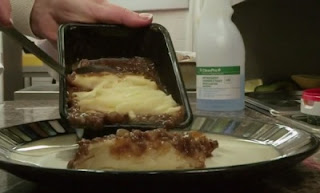 On Monday (13 March), BBC’s The One Show highlighted the confusion surrounding black plastics recycling and what is being done about it, shedding some light on the current situation, and interviewing representatives of a partnership between plastic consultancy Nextek and Viridor that is aiming to address the problem.


Each year, over 1.3 billion black CPET trays are used in packaging in the UK and, despite being technically fully recyclable, it is not currently possible to effectively sort them from other materials at a materials recovery or plastic recycling facility and so the trays often get sent to landfill or incineration. The reason for this is that the main pigment used to colour black plastic, carbon black, is not detectable by the near-infrared (NIR) optical sorting equipment, because it does not allow the light to pass through.

Because of these ongoing problems with sorting black plastic, last week, WRAP released updated guidance calling on local authorities to add black plastics to their “not recycled” lists. The statement advised local councils to first check with their processor if black plastic can be included in household recycling and to update their guidelines if it cannot.
However, WRAP-funded trials in 2011 had developed a number of potential alternatives to carbon black, and one of them is being explored further through this partnership between Nextek and Viridor. With the WRAP funding, Nextek produced a new black pigment system, which means that materials can be identified by the NIR sorting equipment. Trials have now been initiated at Viridor’s £15-million specialist plastics facility in Medway, Kent, and the Co-operative Group is also taking part in the trial.
The new packaging would cost ‘less than a tenth of a penny’ per unit, though some have previously suggested that any price increase would make it unlikely to be picked up by retailers. Another potential problem that commentators have identified is that diverting black PET trays into the mixed-colour PET stream could damage the current end-market for this fraction.

‘The standoff is getting in the way of common sense’

Presenting the segment on The One Show, environmental journalist Lucy Siegle suggested: “Scientists have already come up with a new kind of black tray, which could be recycled, saving the taxpayer nearly £3 million a year in disposal costs, but no one is using it.” The segment suggests that “no one wants to go first”, with Siegle saying: “The standoff is getting in the way of common sense.”
Siegle then challenged Ian Ferguson from The Co-operative Group, which is monitoring the trials, to “take the plunge” and start using the new black plastic, saying that sorting facilities “would have to follow”.
Ferguson commented: “The Co-op’s got an ambition to make it easier to recycle all of our packaging and this would be a major step forward… We need all the other sorting facilities to adopt this technology before we start to put it into place on our brand. We can’t move before they tell us.”
Commenting on Viridor’s recycling trials with Nextek, Sarah Heald, Director of Corporate Affairs and Investor Relations at Viridor’s parent company Pennon, said: “Working with Nextek has allowed us to test the potential for a new UK technology to transform the global problem of supermarket black plastic packaging into a new recycling stream.
“We are committed to working with manufacturers, packaging designers and supermarkets to accelerate innovation – using less packaging, designing in recyclability then simplifying recycling systems so that everyone can do the right thing and put the right stuff in the right bin.”
Professor Edward Kosior of Nextek, expressing his hopes for the future of the technology, said: “Bringing together all the main parties for the first time, from us as technology innovator, to the Co-op as retailer, and Viridor as the recycler is momentous.
“I’m confident that together we have found a technology solution to end these trays filling up landfills. This is a technology that can work immediately in virtually all recycling facilities across UK, Europe and USA.”
This isn’t the only time Nextek has been involved in attempting to tackle the problem of sorting plastics. The company received funding from WRAP alongside several other partners in 2016 to identify new luminescent inks capable of increasing automated sorting efficiency when applied to plastic packaging labels. Also, in 2014, in conjunction with Sainsbury’s and Marks and Spencer, Nextek was involved with an in-market trial to test new CPET trays.