There are question marks over the nuclear project in north Somerset:
Futures Forum: The future of Hinkley: "high cost and risky deal"

Meanwhile, there are even bigger question marks over similar projects in the States:
New nuclear plants in USA axed in situation eerily similar to Hinkley C | East Devon Watch

And Matt Ridley writing in the Times would agree that nuclear is not the option: 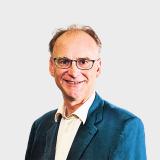 Shortly before parliament broke up this month, there was a debate on a Lords select committee report on electricity policy that was remarkable for its hard-hitting conclusions. The speakers, and signatories of the report, included a former Labour chancellor, Tory energy secretary, Tory Scottish secretary, cabinet secretary, ambassador to the European Union and Treasury permanent secretary, as well as a bishop, an economics professor, a Labour media tycoon and a Lib Dem who was shortlisted for governor of the Bank of England.

Genuine heavyweights, in short. They were in general agreement: energy policy is a mess, decarbonisation has been pursued at the expense of affordability and, in particular, the nuclear plant at Hinkley Point C in Somerset is an expensive disaster. Their report came out before the devastating National Audit Office report on Hinkley, which said the government had “locked consumers into a risky and expensive project [and] did not consider sufficiently the risks and costs to the consumer”.

Yes, the proposal is to 'go for shale':
Times article: scrap Hinkley C, frack for shale and to hell with carbon reduction | East Devon Watch

He is particularly popular in Australia:
CLIMATE CHANGE: THE FACTS 2017 | Herald Sun
Is climate policy doing more harm than good? The Australian

Although he won't be particularly popular in places like India:
Climate change linked to suicides of 59,000 farmers in India, finds report | The Independent

Or the Horn of Africa:

‘Somalia is the canary in the coal mine,’ says climate change expert amid East Africa drought crisis

I’ve been studying the East African climate since 1999, when I started working with the Famine Early Warning Systems Network. We try to see the effects of climate change before they happen and predict them – so we can try to prevent the worst impacts.
The climate in Somalia is difficult to assess because of the political and social situation, but we have quite a bit of data from there this year and we know they’ve had almost no rainfall in a lot of areas.
There are two rainy seasons in East Africa, one in October to December and another one in March to May. The March to May one has seen a really big decline – one of the most concerning rainfall trends in the world. In terms of farming, the March to May season tends to be the more important time of year. But when you have two seasons in a row that are bad, that can be a real nightmare.
For Somalia specifically, it was dry in the spring of 2016, it was very, very dry in the fall of 2016 and then it was dry again in the spring of 2017. Three bad seasons in a row have placed millions in peril.
The temperatures have also been going up, approaching 0.8C above what they were at the beginning of the 20th century. 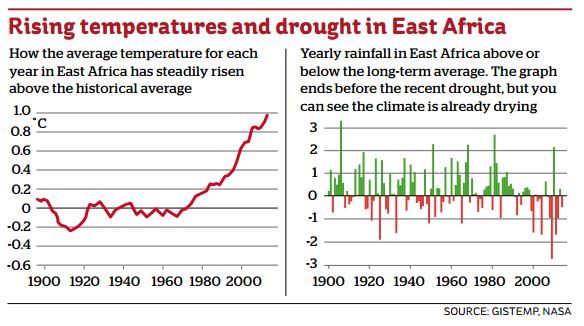 Why I firmly believe climate change is making things worse

There’s a bit of debate about the cause of the rainfall declines – quite a few people think it may be due to natural decadal variability. But I most definitively think both the increasing temperatures and the decreasing rainfall in the spring are highly related to climate change.
Some of our research definitively shows the strong negative impacts of this. It’s really well established that if you’re growing corn and the temperatures go up over 30C, that’s bad for production. It’s also really well established, including in work by our group, that as temperatures go up, that lowers the birthweight of children and increases the rates of severe malnutrition. And when there is a rainfall shortage, you get more evaporation from the land, so you’ll run out of water sooner.
Satellite vegetation data shows us the conditions on the ground really well, and going back 14 years we can say this is the worst drought that we’ve seen in a lot of these places. When we are looking at a map of a drought, we think about the people behind the pixel.

You can help
Visit dec.org.uk to donate to the DEC’s East Africa Appeal and become an ActionAid donor at actionaid.org

There is still a lot that east Africans can do to adapt, especially in places like Kenya and Ethiopia where there are highland areas that always receive quite a bit of water and are conducive to good crops. But there is a huge underlying vulnerability in the people living in extreme poverty in these areas.
In countries like Kenya and Ethiopia there’s a lot of progress, there’s a middle class that is growing with lots of educated people. Things are really getting better for a lot of people. But then on the margins of these societies, you still have millions and millions of poor people.
I feel concerned for my own children as well not just the children in East Africa. People need to realise that a place like Somalia is our canary in the coal mine – it’s one of the places that will see the effects of climate change first, but we are all in the same mine as the canary at the end of the day.
Look at the migrant crisis in Europe, for example – we’re all on the same planet, so if we try to ignore the effects of global warming that we are seeing now, it’s going to be to the detriment of a lot of vulnerable people but also the people in the developed world.

Read more on inews.co.uk
Worsening drought makes East Africa the frontline of the world’s fight against climate change
‘I must thank the British public for their East Africa donations, your money is not wasted’

It’s certainly going to be a race to see whether we curb emissions in time or not to prevent the very worst effects of global warming – but you could say it’s to our advantage is that we’re already seeing a lot of effects of climate change. The better we can alert people to those, the more of a chance we’ll have to turn the ship around.
Whether people will listen or not remains to be seen. But science has been progressing pretty steadily for the last 300 years, so in the long run I think science is going to prevail.
Dr Chris Funk is a researcher with the US Geological Survey, which is based at the University of California’s Climate Hazards Group

Climate change will almost certainly heat the world so much it can never recover, major study finds | The Independent
.
.
.
Posted by Jeremy Woodward at 08:31