Citizen Jane: Battle for the City @ BBC Four >>> >>> >>> 'a willingness to be sceptical' about modern town planning

BBC Four showed us an excellent documentary last night - about the activist Jane Jacobs who in the 1960s fought to save the New York neighbourhoods from demolition. She recognised the importance of  protecting and maintaining the streets and public spaces to the “social capital” and cohesion of the city:


Citizen Jane: Battle for the City


In 1960, Jane Jacobs's book The Death and Life of Great American Cities sent shockwaves through the architecture and planning worlds, with its exploration of modern city planning. Jacobs, a journalist, author and activist, was involved in many fights in mid-century New York, to stop 'master builder' Robert Moses from running roughshod over the city and demolishing historic neighbourhoods in pursuit of his modernist vision.

This film retraces those battles as contemporary urbanization moves to the very front of the global agenda, and examines the city of today through the life and work of one of its greatest champions.

Here's a review of the documentary from the Mirror:

Citizen Jane: Battle for the City review - A fascinating look at US post-war activism

One highlight of my son’s summer holiday is a walk down the marina pier in the little French town we always visit.

By MATT BAYLISS
There are purple mountains in the distance and parked up along the pier, the show-off yachts of the rich. For years people like us have strolled up and down to admire, or laugh at, the massive boys’ toys, get a glimpse of some oligarch dressing for dinner or the crew hands washing the decks. This year the pier was locked behind security gates. Where there had once been life, variety, people of different sorts interacting, there was now a walled-off enclosure.
Focusing on post-war American city-planning battles, Citizen Jane: Battle for the City (BBC4) certainly didn’t sound like a stroll along the harbour. It turned out to be a fascinating film of many parts. It was a tribute to Jane Jacobs, writer, activist, human. It was a struggle between men and women, rich and poor, big ideas and everyday realities. Whether you found it inspiring or disheartening though is another matter.

The story was set in an era of big ideas and also dangerous ones. In Depression-era America, there was a clash between the grand buildings of the big cities and the squalor below on the streets. Instead of addressing the causes of the poverty, government went for a quicker fix – removing the people and the streets they lived on. 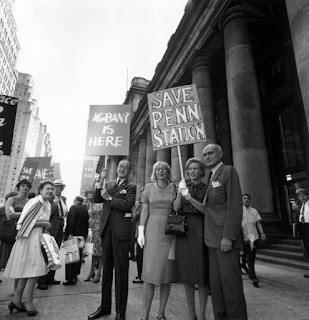 After the Second World War, the US went slum-clearance crazy, designating whole vibrant parts of its cities as “cancerous”, bulldozing them and replacing them with faceless blocks. The centres became lifeless business zones, the outer edges forests of looming towers, all connected by vast freeways.


Working as a secretary by day, pacing the vanishing streets of her beloved New York City by night, Jane Jacobs began recording what she saw. Her journalism and her books became highly regarded by many and they prophesied, accurately, what would happen to urban life. It all boiled down to what people saw when they looked at the old downtown areas.
Slums, hovels, nests of crime and disease? Could they not be vibrant cauldrons of life where people interacted, caring for one another and the place they inhabited?
As a grassroots activist Jacobs led campaigns against the renewal of Greenwich Village and Manhattan’s waterfront. “Project” after “project” (US planners’ word for low-income housing estates) became uninhabitable, centre after centre a no-go zone while critics dubbed Jacobs a militant housewife peddling homespun twaddle.
As a life story, Jacobs’s one was inspiring. But ultimately, the gates and the guarded blocks of today’s world suggest the citizens lost out.
Citizen Jane: Battle for the City - A look at US post-war activism | TV & Radio | Showbiz & TV | Express.co.uk

Matt Tyrnauer’s documentary tells the story of one woman’s fight against urban planning
MAY 4, 2017

by: Danny Leigh
Godzilla vs Mothra, Alien vs Predator, La La Land versus the world. Movies thrive on the clash of titans, and in Matt Tyrnauer’s new documentary Citizen Jane: Battle for the City we have a peach. In one corner scowls Robert Moses, fabled postwar New York city planner — opposing him Jane Jacobs, the writer and activist whose campaigns helped save Manhattan from becoming a superhighway. To be gripped by Tyrnauer’s film, a fascination for New York history or how cities are made may be useful — but really, you just need a taste for a scrap.
The origin story takes us back to the dawn of the 1930s when the Chrysler and Empire State buildings cut their ribbons as the Depression battered the streets below. Enter Moses, a young bureaucrat with a zeal for improving the lives of the city’s poor. But in later years came unchecked power, and an obsession with the wrecking ball as cure for the “cancer” of slum housing that was often perfectly decent. What the film calls “the godlike vantage” of the planner was a destructively neat fit for a strong-arm personality and the Futurama dreams of the age, fixated on what Moses saw as the jewel of urban life — the car.
To play his nemesis, a casting director might well turn to a figure like Jacobs, with her bicycle and air of beatnik librarian. But their differences went deeper than surface. A woman giving voice to her thoughts in the first days of second-wave feminism, Jacobs found something almost spiritual in the teem of the inner city — and saw that once you lost the store and the street, well, there goes the neighbourhood. And so inevitably came war, and a showdown over Moses’s attempts to force through his Lower Manhattan Expressway in a backroom deal that would have seen SoHo and Greenwich Village flattened and reborn as 10 lanes of gridlock. Tyrnauer lets that image sink in without losing sight of the wider context — James Baldwin appears on screen to remark how often “urban renewal means negro removal.”
As a history of competing powers, the film is enthralling. Jacobs’ love of the public arena translated into prankishly dragging Moses’s plans into the light, while he was undone by a basic contempt for other people’s opinions. Another film might have pondered if a trace of Moses’s vision could be redeemed, but the case it makes for Jacobs is cast iron. She had, it is said, “a willingness to be sceptical”. What could be more heroic?
Citizen Jane: Battle for the City — enthralling
.
.
.
Posted by Jeremy Woodward at 12:01