Plans for Port Royal: of sewers and sewerage

... a little campaigning over the future of the park was happening - as there are worries for its future:
Futures Forum: Plans for Port Royal: anticipating a Regeneration Board >> "There are no proposals, no plans and no schemes being put forward."

As well as questions over the legal position of the Ham
Futures Forum: Plans for Port Royal: anticipating a Regeneration Board >> Scoping Study consultation > the Charity Commission and potential conflicts of interest

... there is new research from the Historic Sidmouth website on what is exactly under the Ham:

Sewers and sewerage is of huge concern in a town which relies on attracting visitors and invalids. No one is going to come to a town for their health if it is immediately apparent that the area is insanitary.
One of the best sources for information about sewers and sewerage are the Medical Officer’s reports to the Local Board, the fore-runner of the Urban District Council which is the equivalent of the Town Council today. The Medical Officer was not only a Doctor but kept the records of births, deaths and illnesses within the town. He was also responsible for assessing housing conditions and anything else which might have an effect on the health of the town.
Early sewers were quite basic and discharged straight into river and sea, but by the 1880s it was apparent that the town needed an overhaul of these old drains. The population of the town was increasing all the time as were the visitors. The old drains did not have sufficient capacity and at times of heavy rain they overflowed. The idea of treating sewage was starting to take hold and raw sewage drifting back onto the beach was becoming more and more unacceptable.
There were two main schemes put forward. One would see the sewage discharged at Chit Rocks and would re-used drains wherever possible. The other was a much more ambitious scheme which would see many new drains, a large holding tank at The Ham and a twice daily timed discharge to take advantage of the tide to remove sewage from near the town. Te second one was of course much more expensive and feelings ran high within the town between supporters of each scheme.
Eventually, the decision was made in favour of The Ham scheme, and work commenced in 1898. This was reported to be a cause of great distress to Mr JGG Radford who had given The Ham to be used as a Pleasure Ground. Most of the southern end of The Ham was dug up and a huge brick tank was built along with a pumping house. It was done by hand, as things mostly were then. It gave employment, and improved health and amenities, but the tank was only about 18 inches below the surface and the meadow never recovered. There was not enough depth of soil to prevent drying out and the flora of a water meadow could not survive there.
This original brick tank has been replaced and the sewage is no longer pumped out to sea. Instead it is pumped up to the sewage works at Sidford. The holding tank is still there though. 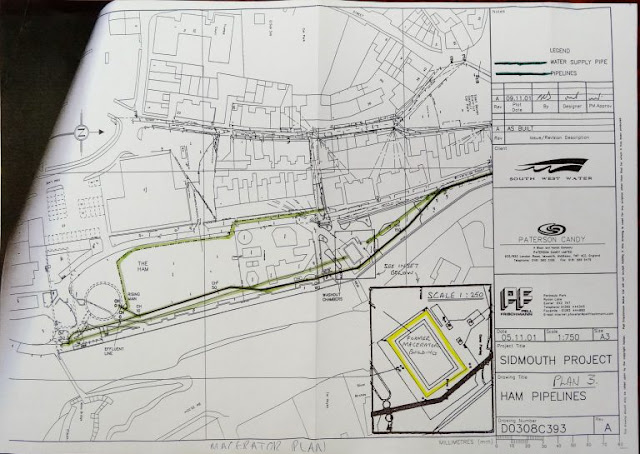 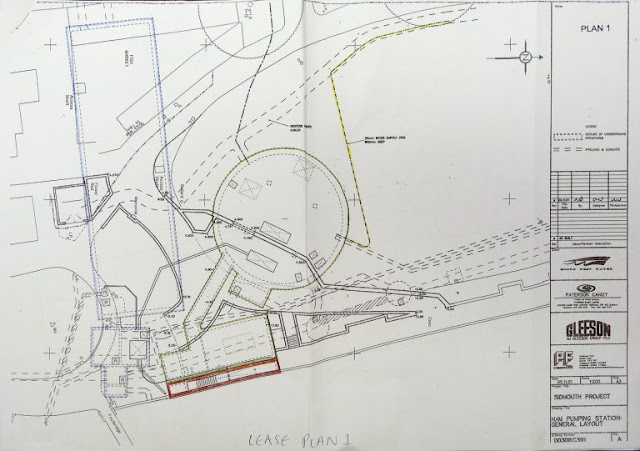 Sewers and sewerage. | Historic Sidmouth
.
.
.
Posted by Jeremy Woodward at 16:25