The South West: "This is where the young people are struggling to get on to the property ladder which is why towns are banning holiday homes."

It is clearly a very good investment to buy property - if not lucrative
- as covered in today's Daily Mail:

> Some 5.2million Britons own at least two properties – up 30 per cent since 2002
> Half of these homes are owned by wealthy baby boomers (born from 1946 to 1965) with another quarter owned by those born from 1966 to 1980
> But research by the Resolution Foundation think-tank will add to concerns about declining home ownership, particularly among younger people born after 1980 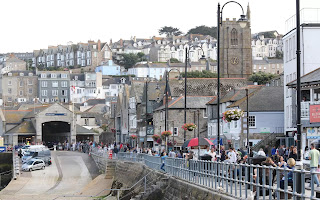 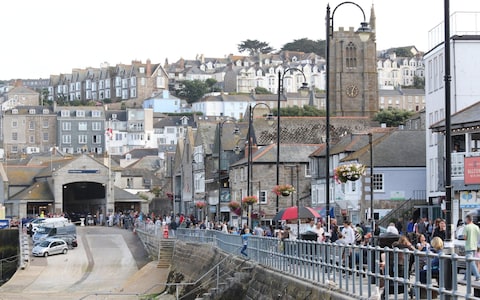 St Ives in Cornwall has voted to ban the building of second homes CREDIT: JOHN LAWRENCE/TMG

One in ten British adults now owns a second property, research has found.

The figures published by the Resolution Foundation show that the number of people with multiple properties rose from 1.6m to 5.2m between 2000 and 2014 - a 30 per cent increase in the proportion of adults who owned more than one home.

The analysis also suggested that most of these owners are not landlords, with just 3.4 per cent of adults letting property out. This would mean that 6.6 per cent of adults, or 3.4m people, have extra properties that they leave empty as an investment or use as holiday homes.

The think-tank examined data from the British Household Panel Survey and the Office for National Statistics to find that while overall home-ownership has plummeted, second home-ownership has risen dramatically. The proportion of adults owning any property rose to a high of almost 66 per cent in 2002 but has since fallen to just over 60 per cent.

Laura Gardiner, senior policy analyst at the Resolution Foundation, said: “Multiple property ownership is still a minority sport, but a growing one that represents a significant boost to the wealth pots of those lucky enough to own second homes. People with second homes not only have an investment that they can turn to in times of need, for instance in later life when care is required, but if the property is rented out they also see a boost to their incomes here and now."

She added that properties not being used for rental could include "holiday homes, flats that adult kids live in for free, empty properties they’re speculating on, MP’s with London flats and constituency houses, people who’ve inherited their recently deceased parent’s home and haven’t worked out what to do with it yet".

"It's really the haves and have nots - there's a generation of people being locked out of owning their own home and all the benefits that go along with it, and there's another generation who's got the leverage to benefit from rising house prices. We need to get homes that are for living in and not for investment. It's telling that there's little incentive to sell - even with an empty house you're sitting on a rising investment."

The majority of those owning second or third homes were based in the wealthiest areas of the UK, the report added. Almost six in ten landlords are based in the South East or South West, the East of England and London.

"This is where the young people are struggling to get on to the property ladder which is why towns are banning holiday homes," added Ms Higgins. "These people have had years and years of benefit from a rising housing market - but you shouldn't be making more money off your house than you do from going to work."

Last year the Cornish town of St Ives voted to ban the building of second homes. The town, dubbed Kensington-on-Sea because of its popularity with well-heeled west Londoners, held a referendum last May after figures revealed that one in four new properties were being used as second homes. A judicial review of the plan brought by an architectural firm failed in November.


Holiday homes are attracting investors with returns of up to 12% a year, but will it make life more difficult for local people?

Since April buy-to-let investors have faced new taxes on their rental revenue, while at the same time the Bank of England has enforced stricter lending requirements on the banks issuing the loans – with the result that buy-to-let lending is down by half this year.

Now investors are turning to furnished holiday lets, which enjoy an abundance of tax benefits that no longer apply to traditional buy-to-let. The companies promoting holiday lets as an investment say that while Cornwall and Devon remain firm favourites, the best value is to be found in the Yorkshire Dales.

The tax treatment of furnished holiday lets is startlingly generous. If you buy a property and let it out for holiday use, you can still set your full mortgage interest repayments against tax, unlike under the rules that have hit buy-to-let. You can also kit out the cottage to a luxury standard and deduct the entire cost from your pre-tax profits. A major tax loophole means you also don’t have to pay council tax on the property, and can almost certainly avoid local business rates. You can even run the income into your pension and obtain tax relief. And when you come to sell it you can qualify for a whole range of reliefs that mean any capital gains tax is minimised. About the only tax barrier for investors is the 3% additional stamp duty that applies to any second home purchase.

Trouble in the Dales as holiday homes become the new buy-to-let | Money | The Guardian
.
.
.
Posted by Jeremy Woodward at 07:23

My name is Ben Roland am from U.S.A, I wanna use this opportunity to tell every readers of this post out there that this is your greatest and legit platform to be duly initiated to illuminati. As of the year 2010 when I was newly initiated to illuminati I benefited all my tangible hearts desires such as SSCN (Secret Serial Code Number), illuminati powerful charm ring and cash some of $2,000,000.00 dollar to establish my life. Generally, your benefits counts on your heart desire respective of your personal challenges . For registration and enquiry, contact WhatsApp+1508-819-2672 or email illuminatiempire084 @gmail.com. REGISTRATION IS FREE TO EVERY NEW MEMBERS.

HAVE YOU BEEN IN SEARCH FOR GENUINE HACKER'S ONLINE?. HAVE YOU LOST YOUR MONEY TO BINARY OPTION SCAM OR ANY ONLINE SCAM WHATSOEVER?. WELL, YOU HAVE FOUND REDEMPTION IN ASORE CORP.
asorehackcorp@gmail.com

Asore Corp is a group of multinational Hacker's, an affiliate of Evil Corp. We make sure by all means necessary that our clients get the best of services on a🔐PAYMENT AFTER JOB IS DONE BASIS✅. Rather than send money and trust a criminal to fulfill your deal, you can make sure the job is done before WORKMANSHIP is paid for. You'll get excellent customer service.
That's a 100% guarantee. Our Cyber security Technicians are on standby 24/7 to receive your job requests.

⚠️ BEWARE OF FRAUDSTARS looking to hoax.
if you have been a VICTIM, contact : ✉️cyberprecinct@gmail.com for directives.
Here, it's always a win for you.