The District Council has provided an example of what it considers to be a 'community asset' in a recent press release:

Have your say on proposed parking charges for Manor Pavilion Theatre, Sidmouth

East Devon District Council is proposing to introduce public pay and display parking in the Manor Pavilion car park, next to the Manor Pavilion Theatre and Arts Centre in Sidmouth. This 21 space car park has historically been designated as a private car park for people visiting the theatre and arts centre. The council is inviting everyone to have their say on these proposals before 5pm on Friday 28 July 2017.

Cllr Tom Wright, East Devon District Council’s portfolio holder for the environment, said: "In addition, a better way is needed to help us and the theatre properly manage this important asset and the way the car park is used and we feel this is the best solution."

And there are 'community assets' which the church would rather not become any such thing: 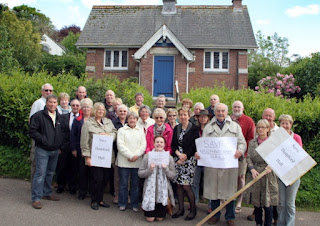 Anger as Harpford Hall is put up for sale

Harpford residents protest as the village hall may be sold off. Picture by Alex Walton. Ref shs 1972-20-14AW

Residents and councillors have blasted church bosses for putting the disused Harpford Hall on the open market - jeopardising its future as a community asset.

It still depends on what is meant by 'community asset', though.

THE piece of land which will house a long-awaited £1 million Sidmouth community centre has been handed to the town - a move civic leaders hope will ward off developers for decades to come. District council chiefs have signed over the Stowford Rise plot to their town council counterparts who will, in turn, lease it to community centre driving forces for more than a century.

“It’s a very positive thing. It means we keep control of a community asset we’ve fought to get for 26 years. You wouldn’t want someone to come along saying ‘will you sell to the highest bidder?’. That will not happen now. It is seen as a community centre for the whole of the town, so, it was thought the land should go to the town council. Financially it makes no difference at all. It is an asset they (EDDC) have given to us at no cost. We’re quite happy to take it on.”

Similarly, Seaton Town Council have secured a community centre as an 'asset':

As district and county councils look to devolve assets to the lowest tier of government, Seaton Town Council says it is committed to securing assets for the benefit of the community.

Mayor Tony Woodman said: "I am thrilled that the council has decided to purchase the Marshlands building. After the Willoughby House debacle some years ago, and the failure to acquire the St Clare’s premises, current town councillors see this as a magnificent asset for Seaton, and we got it at a greatly reduced price."

Feniton Town Council have formally secured playing fields - but this has been at the formal level of adding the 'asset' to a 'list':

A few weeks ago, Feniton Parish Council set about applying to get the land occupied by the Feniton Playing Fields, Sports and Social Club and the adjacent Car Park registered as a Community Asset with East Devon District Council. What does this mean?

If the owner decides to dispose of the asset within that period, they must inform EDDC of their intentions to do so. If this does happen, it will automatically start the first stage of the moratorium giving the nominating organisation 6 weeks to be considered as a potential bidder.

East Devon District Council commissioned a REPORT and have agreed with Feniton Parish Council that the areas are indeed a valuable community asset for Feniton and have decided that these areas should be included on the Community Asset Register that it holds. The notice detailing the decision can be viewed HERE. This is good news for Feniton.