Brexit: and "taking back control" of fishing waters

A year ago, coastal communities were asking:
What would Brexit mean for the UK's fishing industry? - The i newspaper online iNews

The FT is asking the same question today:

Will Britain’s fishermen be better off after Brexit?

It is hard to think of many sectors that will be more affected by UK leaving the EU
Brexit Briefing
4 HOURS AGO
by: James Blitz
Britain’s fishing industry accounts for only a tiny part of the UK economy, contributing less than half a per cent to annual GDP. But it is hard to think of many sectors that will be more heavily affected by Brexit. For nearly 50 years, the Common Fisheries Policy has dictated where UK fishing boats can operate and how much they can catch. It has also given EU nations access to British territorial waters. Leaving the CFP will have a dramatic impact on coastal communities across the country.
Michael Gove, environment secretary, on Sunday took an important first step in exiting the CFP when he announced that the UK will leave the 1964 London Fisheries Convention. This allows vessels from six EU nations to fish within six and 12 nautical miles of the UK coastline. Mr Gove says Britain will now go further and “take back control” of its territorial waters up to the 200 nautical miles currently allowed by the CFP. As a result the UK will be able to “dramatically increase the amount of fish that we catch”.
But how promising is this new future for British fishing? Superficially, withdrawal from the CFP puts the UK in a strong position. As a recent House of Lords report argues, the UK will be able to set its own conservation rules and will have an independent voice in setting annual Total Allowable Catches alongside the EU and Norway. “Withdrawing from the CFP gives the UK the opportunity to develop a fisheries management regime that is tailored to the conditions of UK waters and its fleet,” the reports says.
However, Andy Lebrecht, a former director-general for food and farming at the Department for Environment, Food and Rural Affairs, has argued that the UK will still have to reach an agreement with the EU on quotas and access to each other’s waters after Brexit. In a recent piece for InFacts, he said there were four reasons why the UK does not hold all the cards.
First, while the Scottish fishing fleet depends relatively little on non-UK waters, the English fleet traditionally catches its fish in Irish, French and Norwegian, as well as UK, waters. “Retaining access to those waters will be an essential demand for the UK,” he says.
Second, each country’s quotas are based on historical catch records dating back to 1973. The EU can be expected to resist strongly any attempt to reset such a well-established basis for quota allocation.
Third, the UK fishing industry depends heavily on exports to the EU, so is vulnerable to tariffs. Britain exported £921m of fish (including £224m salmon) to the EU in 2015, whereas total landings (the amount brought to the UK) were worth £775m. “Countries such as France and Spain would have every incentive to demand high tariffs on fish imports from the UK,” says Mr Lebrecht.
Fourth, UK vessels benefit from rights to fish large quantities of cod in North Norwegian waters that are “paid for” by transfers to Norway of other stocks which are mainly of value to other EU countries. (This recent FT piece shows how critical the question of Norwegian cod is expected to be.) Maintaining this arrangement will be another British demand.
As in many other aspects of the EU negotiation, Britain could refuse to do a deal and go its own way. But the government would need to consider the consequences of such a move. The breakdown of any agreement would probably lead to overfishing and the depletion of stocks. It would result in the imposition of tariff barriers. Above all, the British would have to ask themselves whether they could effectively patrol and defend UK waters against fishing boats from EU states.
Given these constraints, Britain has little room for manoeuvre in negotiations over post-CFP arrangements. The UK fishing community may emerge from Brexit in a weaker position than it expects.
Will Britain’s fishermen be better off after Brexit?

So, now it seems we have some answers:
UK to 'take back control' of waters after exiting fishing convention | Politics | The Guardian
Government to pull out of EU fishing deal and reclaim UK waters for British fishermen - Telegraph

The response in Devon is positive: 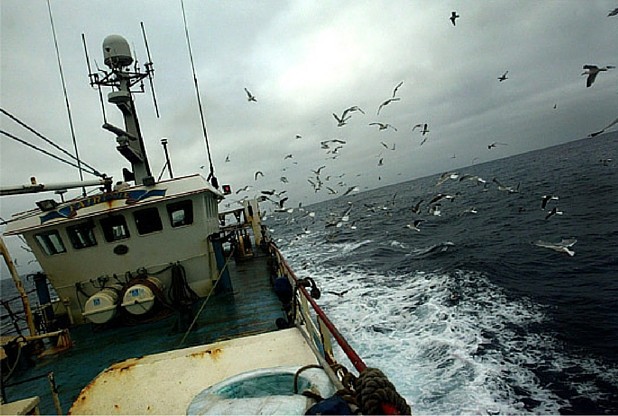 Devon's fishermen are celebrating the 'tantalising' announcement that foreign boats will be banned from fishing in waters within 12 miles of the British coast, which will leave them to reap the economic benefits.
Jim Portus, one of the South West's most respected fishing industry leaders, welcomed the announcement, made by Environment Secretary Michael Gove, that the UK was leaving the London Fisheries Convention. It means that in two years' time, fishing vessels from France, Belgium, Germany, Ireland and the Netherlands will no longer have access to Britain's waters.
He said: "The foreign fishermen are taking millions of pounds' worth of fish every year. That fish should be available for British fishermen in the future."
But he added that there was still a risk that exclusive access arrangements would be negotiated away to European countries by our politicians.
Mr Portus, chief executive of the South Western Fish Producers Organisation, said: "Absolutely yes, we welcome the Government's announcement. It's something I, and the organisation I work for, and the fishermen, have been campaigning for since about the time of the referendum.
"We realised quite some time ago that this quirky piece of legislation existed and it needed dealing with more or less at the same time as Brexit. It's nothing to do with Brexit; it's something that was agreed before we joined the European Community. We were concerned that it would continue after the end of the Common Fisheries Policy.
"Various organisations took legal advice and presented evidence to ministers. Around the time of triggering Article 50 we would have liked the two years' notice to be coincident but the Government delayed, presumably while taking more legal advice.
"Michael Gove has done the right thing and made this announcement and I'm sure the fishing industry is celebrating being one step closer to having more control of our resources and the opportunity to have exclusive access to our waters."
The London Fisheries Convention was signed in 1964, before the UK joined the European Union. It allows vessels from France, Belgium, Germany, Ireland and the Netherlands to fish between six and 12 nautical miles of the UK's coastline. It sits alongside the EU Common Fisheries Policy which allows all European countries access between 12 and 200 nautical miles of the UK and sets quotas for how much fish nations can catch.
The Government has said that this move will enable the UK to become fully responsible for fisheries management and lead to a 'more competitive, profitable and sustainable industry'. In the move, UK vessels will also lose the right to fish in the waters six to 12 miles off the coast of the other countries.
Mr Portus said there was much work to be done over the next couple of years. He said: "Nothing will happen for two years as notice has to be given to get us extricated from the arrangement. The problem is we've got Brexit negotiations going on also. You have to get rid of one piece of legislation before you can replace it.
"Over the coming two years I will continue to lobby to ensure that our politicians don't use the fishing industry as a negotiating point to give away access arrangements now that we've got them back. It's tantalising, this exclusivity we should have in two years' time, but there are risks we could be negotiated away. We've got to make sure Michael Gove and his Defra team maintain their resolve and make sure our fishermen are well looked after.
"I look forward to having conversations with ministers on behalf of the fishermen of Brixham and Torbay and fishermen from other fishing communities I represent. They will all be interested to know what's in it for them in the future."
In 2015, the UK fishing industry landed 708,000 tonnes of fish worth £775million. Under the convention, around 10,000 tonnes of fish was caught by other countries, worth an estimated £17million.