"Cities other than London and rural areas also provide examples of worrying relationships. In East Devon a serving councillor was found in 2013 to be offering his services as a consultant to help developers get the planning decisions they wanted."

It was the Telegraph which uncovered the rather unpleasant goings-on in East Devon a couple of years back:
Futures Forum: Lobbying
Video: 'If I can’t get planning, nobody will' says Devon councillor and planning consultant - Telegraph
Councillors for hire who give firms planning advice - Telegraph
Telegraph exposes councillors lobbying for planning development | Local Government

And it was Anna Minton who gave us much of the context for these goings-on:
Futures Forum: A history of the East Devon Business Forum, part seven ..... "The local mafia": Conflicts of interest in East Devon
New report: Scaring the living daylights out of people
www.annaminton.com/Scaring The Living Daylights March 27th 13.pdf

And by the Guardian:

Anna Minton
The revolving door connecting politicians with lobbyists clearly helps them, but does it benefit us?

• Anna Minton is a housing writer 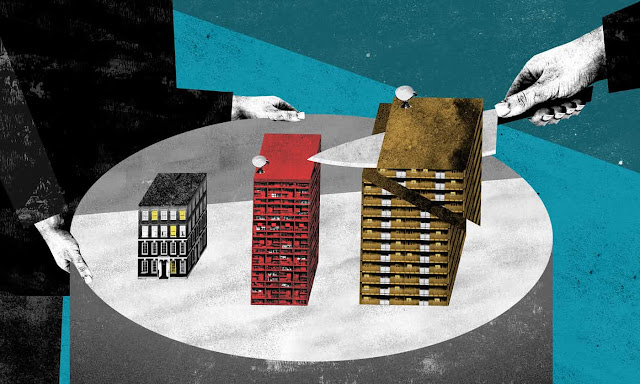 The community of North Kensington is demanding that the public inquiryinto the Grenfell Tower fire be widened in scope. It must, local people say, “seek to understand how residents’ voices have been systematically ignored for so long”. On the other side of London, Haringey residents took to the streets last week, protesting at their council’s plans for regeneration.
To understand why people feel their voices are not being heard, it is essential to investigate the environment in which politicians and developers operate. Local government has a history of corruption that includes the jailing of the Newcastle council leader T Dan Smith in the early 1970s, and the illegal decisions made by Shirley Porter in the Westminster “homes for votes” scandal in the 1980s.
Today such criminality is rarer. Instead, we have a concerning culture of cronyism that, while not illegal, suggests a lack of accountability. From the housing minister down to the local councillor, elected politicians now routinely rub shoulders with property developers, house builders and commercial lobbyists. This is no accident. Politicians’ decisions have an impact on companies’ ambitions, whether they are reviewing planning applications, setting affordable housing targets or “regenerating” whole areas. Bluntly, companies want these decisions to go their way. Develop connections with the decision-maker and you can “strip out risk”, in the words of one lobbying firm.

The lines between politician, official, developer and lobbyist are barely drawn

The politicisation of planning has come with the growth of the regeneration industry. While once planning officers in local government made recommendations that elected members of planning committees generally followed, today lobbyists are able to exert far greater influence.
It’s not easy to see into this world, but there are traces in the public domain. Registers of hospitality, for example, detail some of the interactions between councillors and the commercial property business. Take a week in the life of Nick Paget-Brown, the Kensington and Chelsea leader who resigned in the aftermath of the Grenfell fire. In October last year he had lunch at the five-star riverside Royal Horseguards Hotel courtesy of the property giant Willmott Dixon. The previous evening he had been at a reception put on by the business lobby group London First, whose membership is dominated by property and housing firms. He had breakfast with the Grosvenor Estate, the global property empire worth £6.5bn, and lunch at Knightsbridge’s Carlton Tower Hotel. This was paid for by the Cadogan Estate, the second largest of the aristocratic estates (after Grosvenor), which owns 93 acres in Kensington, including Sloane Square and the King’s Road.
Bingle is also a player in the other big regeneration story of recent weeks: Haringey council’s approval of plans for its HDV – Haringey development vehicle. This is a “partnership” with the Australian property developer Lendlease, a lobbying client of Terrapin’s. The HDV promises to create a £2bn fund to build a new town centre and thousands of new homes, but local residents on the Northumberland Park housing estate, whose homes will be demolished, are vehemently opposed. The Haringey leader, Claire Kober, has lunched or dined six times at Terrapin’s expense.Rock Feilding-Mellen, the councillor in charge of the Grenfell Tower refurbishment, who has stepped down as the council’s deputy leader, had his own list of engagements. As the Grenfell Action Group noted earlier this year, he was a dinner guest of Terrapin, the firm founded by Peter Bingle, a property lobbyist renowned for lavish hospitality.
In Southwark, just as in Haringey and Kensington, there is a revolving doorbetween politicians and lobbyists. The former leader of Southwark council, Jeremy Fraser, went on to found the lobbying firm Four Communications, where he was joined by Southwark’s former cabinet member for regeneration Steve Lancashire. Derek Myers, who until 2013 jointly ran Kensington and Chelsea and Hammersmith and Fulham councils, is now a director of the London Communications Agency, a lobbying agency with property developers on its client list. Merrick Cockell, the leader of Kensington and Chelsea until 2013, now chairs the lobbying firm Cratus Communications, which also specialises in property lobbying. In Westminster, the hospitality register for the last three years of its deputy leader, Robert Davis – chair of the council’s planning committee for 17 years – runs to 19 pages.
Cities other than London and rural areas also provide examples of worrying relationships. In East Devon a serving councillor was found in 2013 to be offering his services as a consultant to help developers get the planning decisions they wanted. In Newcastle a councillor who worked for a lobbying company boasted of “tricks of the trade” that included making sure planning committees included friendly faces.
Meanwhile the culture of regular meetings and socialising does not stop with councils. The diary of David Lunts, head of housing and land at the Greater London Authority for the first three months of 2017, reveals a lunch in Mayfair with Bingle, a VIP dinner laid on by a London developer, another meal paid for by a housing giant, and dinner on Valentine’s Day with a regeneration firm. Consultants and a developer furnished him with more meals before he headed off to Cannes for Mipim, the world’s biggest property fair. He also had dinner with Rydon, the firm that refurbished Grenfell Tower.
Further up the food chain, it was only because of Bingle’s boasts that we heard of a dinner he gave the then local government secretary, Eric Pickles. Held in the Savoy’s Gondoliers Room, it was also attended by business chiefs, including one who was waiting for a planning decision from Pickles’s department. The dinner was never declared on any register of hospitality because Pickles said he was attending in a private capacity.

Read more
Lunt’s former colleague Richard Blakeway, who was London’s deputy mayor for housing until last year, and David Cameron’s adviser on housing policy, became a paid adviser to Willmott Dixon. He is also on the board of the Homes and Communities Agency, the government body that regulates and invests in social housing. Its chair is Blakeway’s old boss, the former London deputy mayor for policy and planning Ed Lister, who is also a non-executive director of the developer Stanhope.
The MP Mark Prisk, housing minister until 2013, advocated “removing unnecessary housing, construction and planning regulations” as part of the government’s red tape challenge. He became an adviser to the property developer Essential Living, eight months after leaving office. Prisk advises the firm on legislation, providing support for developments and “brand” building. Essential Living’s former development manager Nick Cuff was also a Conservative councillor and chair of Wandsworth’s planning committee. A colleague of Cuff’s, who spent 30 years in the south London borough’s planning department, now works for Bingle’s lobbying firm, Terrapin.
This is the world that Kensington’s Paget-Brown and Feilding-Mellen, Haringey’s Kober and countless other council leaders inhabit. Socialising between these property men – and they are mostly men – is used to cement ties, and the lines between politician, official, developer and lobbyist are barely drawn. This culture, and the questions of accountability it raises, must be part of the public inquiry into Grenfell. It is perhaps no surprise that the government doesn’t want it to be.
• Tamasin Cave, a director of the lobbying transparency organisation Spinwatch, contributed to this article

Meanwhile, the District Council has created its own property company:
Futures Forum: District Council local housing company >>> "the ‘huge risk’ in speculating on the property market"
.
.
.
Posted by Jeremy Woodward at 15:09