It seems that the US administration is not too keen on climate change:
Futures Forum: Climate change: the future of the Paris Agreement

With the head of the Environmental Protection Agency having been instrumental in the decision to pull out of the Paris climate agreement:
Scott Pruitt Is Gutting the EPA, Serving Fossil-Fuel Industry - Rolling Stone

Although his UK counterpart would beg to differ:
Futures Forum: Climate change: “History teaches us that unless we prepare for these challenges we will be undone.”

If progress in cutting greenhouse gases is deathly slow, then we might have to fix things in other ways:
Futures Forum: Climate change: and geoengineering >>> "Climate Intervention Is Not a Replacement for Reducing Carbon Emissions"
Futures Forum: Climate change: Will Carbon Capture and Storage be the techno-fix to 'unlock' unburnable fossil fuels?

As said recently by one of the first scientists to warn of the dangers of climate change:
Carbon dioxide must be removed from the atmosphere to avoid extreme climate change, say scientists | The Independent

New developments seem to be too good to be true:

A “spongy” crystal that can turn thin air into fuel by extracting carbon dioxide has been developed by scientists.
The researcher said the light-activated material was a “critical step” towards making a high-value fuel while at the same time reducing the amount of the greenhouse gas in the atmosphere.
It works by turning carbon dioxide into carbon monoxide, which can be turned into a useful source of energy.

READ MORE
There is increasing concern that the world will not be able to restrict global warming to 1.5 degrees Celsius – the target set out in the Paris Agreement on climate change to avoid the more dangerous effects.
This has prompted scientists around the world to try to develop cost-effective ways of removing carbon from the atmosphere.
Professor Haimei Zheng, one of the researchers behind the new material, of the US Energy Department and the University of California, Berkeley, said: “The world right now is in need of innovative ways to create alternatives to fossil fuels, and to stem the levels of excessive carbon dioxide in the atmosphere.
“Converting carbon dioxide to fuels using solar energy is a global research endeavour. 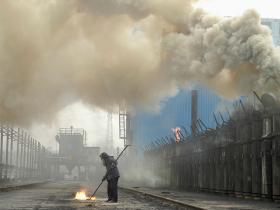 “The spongy nickel-organic photocatalyst we demonstrated here is a critical step toward practical production of high-value multi-carbon fuels using solar energy.”
She said their technique produced almost 100 per cent pure carbon monoxide, with no other gases like hydrogen and methane detected. “That’s a big deal. In carbon dioxide reduction, you want to come away with one product, not a mix of different things. Complete suppression of the competing hydrogen evolution during a photocatalytic carbon-dioxide-to-carbon-monoxide conversion had not been achieved before our work.”
The nickel-organic photocatalyst used in the process is said to have similar properties to metal-organic frameworks, or MOFs, which have been hailed as potential wonder materials.

MOFs are a sophisticated blend of metal and carbon capable of soaking up poisonous gases, creating water from the driest of air, and storing the next generation of hydrogen fuel.
The research was described in a paper in the journal Science Advances.


Crystal invented that can turn thin air into fuel and fight global warming | The Independent
.
.
.
Posted by Jeremy Woodward at 01:00