Many farmers voted to leave the EU because of the 'red tape' around insecticides:
Futures Forum: Brexit: and pesticides

But the controversy around one particular insecticide won't go away, whatever happens next:
Futures Forum: Bees and neonicotinoids >>> "Chemical companies pitch bug-killing options" 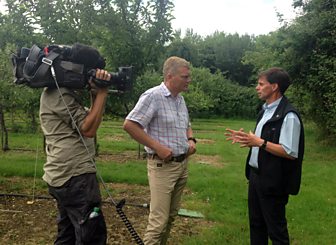 You may have heard of neonicotinoids, they're the insecticides banned on flowering crops across the EU for fear that may harm bees. Well now the biggest experiments ever to find out if that is true or not have been completed and Tom Heap gets a first look at the science. That's not the end of the story, now Europe is deciding whether they should be banned on all crops, but would that be an environmental triumph or a blight on agriculture?

Find out more about neonicotinoids and bees

Here is a longer piece from the BBC:

The most extensive study to date on neonicotinoid pesticides concludes that they harm both honeybees and wild bees.
Researchers said that exposure to the chemicals left honeybee hives less likely to survive over winter, while bumblebees and solitary bees produced fewer queens. The study spanned 2,000 hectares across the UK, Germany and Hungary and was set up to establish the "real-world" impacts of the pesticides. The results are published in Science.
Neonicotinoids were placed under a temporary ban in Europe in 2013 after concerns about their impact on bees. The European Commission told the BBC that it intends to put forward a new proposal to further restrict the use of the chemicals.

Our findings are a cause for serious concern

Prof Richard Pywell, from the Centre for Ecology and Hydrology in Oxfordshire, who carried out the research, told BBC News: "Our findings are a cause for serious concern. We've shown for the first time negative effects of neonicotinoid-coated seed dressings on honeybees and we've also shown similar negative effects on wild bees. This is important because many crops globally are insect pollinated and without pollinators we would struggle to produce some foods."
However, Bayer, a major producer of neonicotinoids which part-funded the study, said the findings were inconclusive and that it remained convinced the pesticides were not bad for bees.
A growing number of studies have found evidence of a link between neonicotinoids and problems for bees. But there have been questions over whether lab-based research represented what was happening in the wider environment or if the results of field-based studies were merely picking up a simple association between the pesticides and bee impacts rather than direct causation.
"There was a need to undertake a large-scale, realistic experiment to represent the effects of neonicotinoids on pollinators in the real world," said Prof Pywell.
The pan-European trials took place across 33 sites. Bees were exposed to winter-sown oilseed rape that had been treated with two different types of neonicotinoids - Bayer's clothianidin and Syngenta's thiamethoxam - as well as untreated oilseed rape.
For bumblebees and solitary bees, the researchers said that in the UK, Hungary and Germany, higher concentrations of neonicotinoid residues found in nests resulted in fewer queens. The scientists also found a type of neonicotinoid called imidacloprid in the wild bee nests. This pesticide was not used in the study, and the team said its presence suggested that despite the 2013 ban, the chemicals were lingering in the environment.
For honeybees, the scientists concluded that in the UK and Hungary, exposure to neonicotinoids meant that hives were at risk of dying out over the winter. Prof Pywell said: "In the UK, we had high hive mortality." In Hungary, colonies fell by 24% over winter. However in Germany, the scientists found there were no harmful effects on overwintering honeybees. They believe this may be because bee diseases are less prevalent in Germany and the insects also have a wider range of flowers to forage on.
Commenting on the research that it had part-funded, Syngenta said the data was valuable but variable. The company highlighted the findings in Germany. It said that if bee habitats and the health of pollinators improved "the impact of neonicotinoids can be minimal".
Dr Richard Schmuck, director of environmental science at Bayer, said: "We do not share the Centre for Ecology and Hydrology's interpretation that adverse effects of the seed treatments can be concluded from this study, and we remain confident that neonicotinoids are safe when used and applied responsibly."
But environmental campaigners, including Friends of the Earth and ClientEarth, said that the study's findings should prompt the EU to extend the neonicotinoid ban.

Prof David Goulson, from the University of Sussex, added: "In the light of this new study, continuing to claim that use of neonicotinoids in farming does not harm bees is no longer a tenable position."
And Prof Nigel Raine, from the University of Guelph in Canada, said: "Whilst results from this large-scale study report varying impacts of neonicotinoid exposure... the overall picture points towards appreciable negative impacts on these important pollinators across the time course of this study."
However, Prof Lin Field, at Rothamsted Research, said: "My feeling is that no firm conclusions can be drawn from these results. This is perhaps not surprising given that there will be many complicated interactions between different neonicotinoids, different bee species and different field conditions."
Data from the study has now been submitted to the European Food Standards Agency (EFSA). EFSA's report on neonicotinoids in 2013 sparked Europe's temporary ban, and it is now preparing another comprehensive assessment to be released in November.
The European Commission is also working on new draft proposals to extend the ban on neonicotinoids. Once they are finalised, EU member states will vote on whether to adopt the new restrictions. For the UK, with Brexit, any decision may be short lived.

Some farmers say that since the ban, their oilseed rape crops have been destroyed by pests.
A report by the European Crop Protection Association (ECPA) estimated that the restrictions were costing the farming industry 900 million Euros a year.
Guy Smith, vice president of the National Farmers Union (NFU), told BBC News that in the UK oilseed rape production had fallen by about 20%. "We think farmers will always want to grow oilseed rape but without neonicotinoid technology in difficult years it will be more challenging."
He added: "While this CEH study provides more useful information, we still don't have that definitive evidence for the impact of neonicotinoids, and yet farmers and food production are hindered by restrictions on these products."
There is also now a concern that the pesticides that are currently being used in place of neonicotinoids may be damaging the environment. Many farmers are now spraying oilseed rape multiple times with older chemicals such as pyrethroids.
Norman Carreck, at the University of Sussex, said this could result in "unknown consequences on bees and other beneficial insects". He explained: "Further studies are needed to assess the effects of the moratorium on bee populations."
A second study published in the journal Science looked at commercial corn-growing areas of Canada. The scientists found that worker bees exposed to neonicotinoids had lower life expectancies and their colonies were more likely to permanently lose queens.
Follow Rebecca on Twitter.

More on this story