Neighbourhood Plan > interim report on Port Royal to be fed into Scoping Study process: "It is important that the views and opinions about Port Royal from the 1863 households who completed the survey should be fed into the public consultation."

This will be fed into the Scoping Study consultants' own work:
Futures Forum: Neighbourhood Plan: final household survey launched > and the Port Royal Scoping Study

Project leaders sitting on a wealth of information from 1,863 Sidmouth homes have fast-tracked an interim report on Port Royal to feed into a consultation 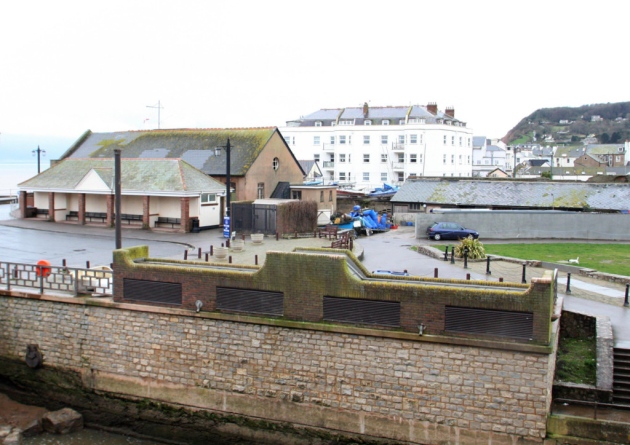 A view of the eastern end of the town. Photo by Simon Horn. Ref shs 7858-10-09SH
Responses to the Sid Valley Neighbourhood Plan’s second household questionnaire show the site is important to residents and they have their own ideas about how it should be developed.
The survey had an unprecedented response rate of 25 per cent and a full report will be published in September.
Louise Cole, vice chairman of the Neighbourhood Plan steering group, said: “This report has been fast-tracked to meet the timeline of the scoping study in order to provide the data and analysis in time to feed in to the consultant’s report.
“Responses clearly reveal a sense of identity and shared aspirations that residents have for Port Royal, showing how important the area is to the Sid Valley.
“The strong message is that development must reflect quality design, heritage and community use and protect and reflect the spatial and architectural characteristics of Port Royal and Sidmouth.
“It shows the need to look at how the area connects with the town, the cliffs, the beach and The Byes.”
Figures show 90 per cent of respondents see Port Royal as a ‘destination’ area, while 91 per cent supported a community space and 73 per cent backed a performance venue.
Mrs Cole said: “The special identity of the area as a place which connects the sea and the natural environment gives rise to overwhelming support from 92 per cent of respondents who perceive the area as a focus for sea-based activities, and for promoting the fishing heritage the figure was 89 per cent.
“Another marked viewpoint that emerges is that amusement arcades, a high-rise building and flats and housing are not supported as part of the development – 88 per cent of respondents indicate no support for any more than 30 homes for the whole Port Royal area.”
A steering group spokesman emphasised that it is neutral, evidence-based and not associated with any group or campaign.
The interim report can be viewed online at https://sidvalleyneighbour hoodplan.com


NEWS    2nd Household Survey -  Report of the Port Royal Section of the Survey is Now Available to View
The second and final household consultation is now closed and the response has been incredible. Over 1800 households have completed the online or paper survey to tell us their views about future development and how this impacts on the natural and human-made environment, our housing and the community who live in this beautiful valley.
Thank you to everyone who responded – we really appreciate the time and effort you gave to tell us your views which will help ensure that the Neighbourhood Plan truly reflects the wishes of the community.
We are now hard at work analysing the surveys and will produce a full report in September.
However, a concept idea for the Port Royal area in Sidmouth has been developed by consultants as part of a scoping study to assess the feasibility of redevelopment of the area. The study has been commissioned by Sidmouth Town and East Devon District Councils, who are the major landowners of the site, and is the first step in exploring options for the area. They are currently undertaking a public consultation on the concept ideas.
While the Sid Valley Neighbourhood Plan Steering Group is not associated with any group or campaign concerning any other issue that affects the Sid Valley, and our neutrality is governed by our objective to make a Neighbourhood Plan which is evidence based through robust public consultation, we think it is important that the views and opinions about Port Royal from the 1863 households who completed the survey should be fed into the public consultation. We have therefore fast-tracked the analysis on the Port Royal section of the survey and this has now been provided to the consultants and both councils.
You can access the report on the Port Royal section of the 2nd Household Questionnaire here.

The Neighbourhood Plan process has to be neutral - despite the pressures out there to voice an opinion:
Futures Forum: Plans for Port Royal: anticipating a Regeneration Board >> Scoping Study consultation > strong views on eastern town proposals

And yet, it is clear that certain themes and demands are emerging from all the consultations with the public:
Futures Forum: Neighbourhood Plan: "Sidmouth’s eastern end is run down and needs to be regenerated, but any development in the town needs to be sensitive and appropriate to the environment."
.
.
.
Posted by Jeremy Woodward at 11:39