Sidmouth without deckchairs >>> Beer with responsibility for everything on the seafront

At the time, the Town Clerk made a very pertinent observation:

Could deckchairs be offered for free in Sidmouth? 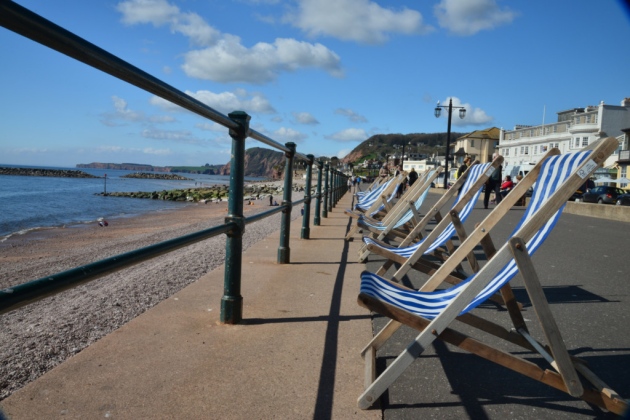 A concession for the 250 iconic seats is currently up for grabs after the last operators ended their agreement with East Devon District Council (EDDC).
Monday’s tourism and economy meeting heard suggestions Sidmouth Town Council could take it on, and the deckchairs could even be offered for free.
Councillor John Rayson said: “Tourism is the main industry in Sidmouth but unfortunately it seems to be going backwards. It doesn’t look like there are going to be any coach trips or boat trips from Sidmouth this year. Now there’s the possibility of not having deckchairs. We should do something about it.”
Representing Sidmouth Chamber of Commerce, Richard Eley said the problem for most private individuals taking on the concession was that the seafront amenities – the deckchairs, beach huts and toilets – had been ‘compartmentalised’ so the risk is greater and there is no ‘mutual insurance’. He added: “The town council could sign a contract because clearly the risk is more widely borne.”
Cllr Paul Wright said: “Having a free deckchair offer would be a brilliant tourism statement. We have a free Hopper Bus and could have free deckchairs. We could run it as a town council. It’s a service to our visitors. We could employ someone directly to do it.”
Town clerk Christopher Holland said: “EDDC like to hang onto things that make them money or is a neutral cost. Anything that doesn’t make money they want to push onto the town council or not provide any more. There’s a pilot in Beer where they’ve handed responsibility to the parish council for everything on the seafront.
“My issue with taking on the deckchairs is it’s one compartmentalised issue. We should be looking bigger than that. We don’t want EDDC to cherry-pick what they want to get rid of – we want to take something and make of go of it.”
The concession covers the Esplanade and Connaught Gardens. Applications for the next three seasons should be submitted before next Friday (June 30) by emailing property@eastdevon.gov.uk


Could deckchairs be offered for free in Sidmouth? - Latest Sidmouth and Ottery News - Sidmouth Herald

... and a deal done with Beer last year:
Futures Forum: Transferring assets from the District Council >>> >>> >>> It would be easier for the village to give more to tourists and keep them in the area if the council had control of assets