How strong is the Roundtable on Sustainable Palm Oil?

And it has been vexed for some time now:
Futures Forum: Palm oil: the secret in your shopping basket - have your say

'This is what is really happening on the ground': 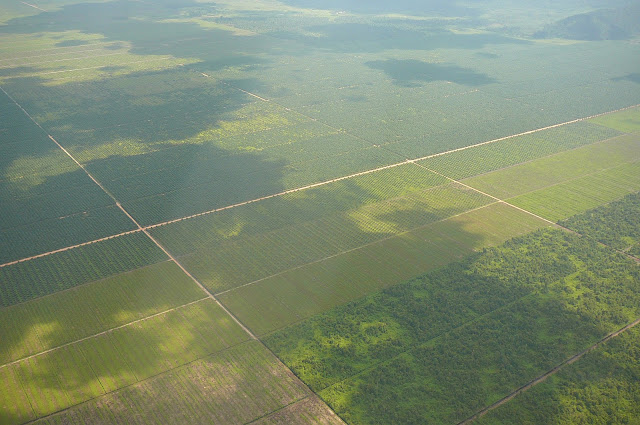 The Economist has put together a report on where we are with sustainable palm oil - and things are not as good as they could be, even if 'its rules are slowly being strengthened':
The palm-oil industry’s effort to curb deforestation has lots of flaws - A pale shade of green

It is reprinted in this weekend's i newspaper:

The palm-oil industry’s effort to curb deforestation has lots of flaws, but falling prices and wet weather has disguised them


To make way for plantations, huge swathes of tropical rainforest have been razed

In a wooden shed perched on top of a hill in Musi Banyuasin, a district on the Indonesian island of Sumatra, a group of palm-oil farmers wax lyrical about their crop. They started planting in the early 1990s after arriving from Java, the country’s most populous island, as part of a government resettlement scheme. Before palm oil, they worked in paddy fields and grew vegetables. But their new life is much more lucrative. Many have bought more farmland and can afford to send their children to university.

“We can even buy cars,” exclaims one mustachioed farmer, gesturing at a 4×4 outside. The vehicle sits against a backdrop of oil palm seedlings and trees, which stretch for miles across the countryside.

In some ways oil palm is indeed a wondrous crop. It is highly efficient. On a per-hectare basis it produces between six and 10 times more oil than equivalents, such as soyabeans. And that oil is highly versatile, turning up in about half of all supermarket products, from pizza dough to lipstick.

That explains why Indonesia’s palm-oil industry has ballooned since these farmers arrived on Sumatra. Over that period the amount of land devoted to the crop has increased more than 10-fold, now covering 123,000sq km, an area the size of Greece. Production surged 14-fold. Indonesia is now the biggest palm-oil producer in the world, accounting for half of global output. Malaysia is second, with a third of production (see chart). In Indonesia the industry accounts for about 2 to 3 per cent of GDP.

But to make way for plantations, huge swathes of tropical rainforest have been razed. In the 2000s, Indonesia was cutting down more forest than anywhere else in the world. According to the International Union for Conservation of Nature, 47 per cent of deforestation in Malaysia between 1972 and 2015 was the result of palm oil. In Indonesia the proportion was only 16 per cent, but in some areas it was much higher. In Kalimantan, Indonesia’s slice of Borneo, for instance, palm oil was responsible for about 60 per cent of all deforestation.

Draining and burning peatlands, carbon-rich bogs formed when soggy soil prevents dead vegetable matter from fully decaying, provides a cheap way to clear land. But it releases vast amounts of greenhouse gases and coats much of South-East Asia in a toxic haze. The loss of biodiversity is also stinging. Oil-palm plantations provide homes for 65 to 90 per cent fewer species of mammal than natural forests.

Endangered species such as tigers and orangutans are among the victims. In the past four decades, species have slid towards extinction twice as fast in Indonesia as in any other country.

There may, however, be cause for hope. In the past few years, the palm-oil industry and Indonesian government, egged on by NGO campaigns, have attempted to save more trees. Satellite images show that, in 2017, the rate of deforestation in Indonesia fell to its lowest level in two decades.

Judging whether this change is the result of the industry’s new approach is confounded by two factors. One is the weather. The most recent bout of scorching peat fires was in 2015, an El Niño year. Since then the weather has been wetter, which slows deforestation since fewer people try to clear by burning, and those fires that are lit are less likely to rage out of control.

A second factor is the price of palm oil. This is closely correlated to the expansion of plantations, as shown by a study of deforestation in Borneo, led by David Gaveau at the Centre for International Forestry Research. Since its peak in 2016, the price of palm oil has dropped by a third, dampening the urge to chop down trees.

Nevertheless, some in the palm-oil industry have made sincere attempts to become greener. The main platform for this is the Roundtable on Sustainable Palm Oil (RSPO), which started in 2004 and is made up of palm-oil growers, investors, traders, retailers and NGOs. It issues certificates to palm-oil mills whose green practices, such as preserving peatlands or forests, are confirmed by an independent auditor. In theory, RSPO palm oil should sell at a premium, since it allows those who buy it (and the final consumer) to sleep soundly.

In practice, things are more tricky. One problem is the RSPO’s low coverage: only one-fifth of palm oil is certified. Many growers are put off by the cost of complying, for benefits that often do not materialise. Only 50 per cent of certified palm oil is sold as such. The rest gets flogged as the normal stuff, bringing no extra income. This reflects weak demand from importers. About two-fifths of palm-oil exports are snapped up by China, India and Pakistan, markets where greenery is little valued.

Other complaints about the RSPO are that its standards are too lenient and that it has little power to enforce them. That is true, but its rules are slowly being strengthened. Last year, it prohibited the clearing of all types of forest, whereas previously only the densest jungle had to be preserved. In 2016, it suspended IOI, a Malaysian conglomerate, for failing to protect forests.

A study led by Kimberly Carlson of the University of Hawaii found that the rate of deforestation on certified plantations was a third lower than on others. But the causality is unclear: the rules of the RSPO in effect ignore deforestation that occurred before 2005. Certified plantations were more likely to have planted oil palms before that cut-off and therefore tended to have less forest land to raze.

Partly because of the weakness of the RSPO, many companies have loudly declared their own tree-loving initiatives. Researchers at the Zoological Society of London looked at the policies of the world’s 70 biggest palm-oil firms. They found that 46 had said they would no longer chop down trees and 36 said they would not farm peatlands. Some companies have been publishing details of land concessions and lists of suppliers, too. That gives pressure groups more scope to keep an eye on them.

Last year, Aidenvironment, an NGO, released a report alleging that Anthony Salim, the owner of Salim Group, Indonesia’s largest conglomerate, was, through layers of corporate ownership, the beneficiary of deforestation (it has not responded to the claim).

A similar report by Greenpeace charged that, although Wilmar, the world’s biggest palm-oil company, has pledged not to deforest, a plantation owned by members of the boss’s family had cut down 215sq km of jungle since 2013.

Some experts also worry that companies’ new-found aversion to deforestation may be simply reducing the price of forest land, which is in turn bought by smallholders and cleared. A recent study by Kemen Austin of RTI International, another NGO, looked at the causes of deforestation in Indonesia. After 2012, clear-cutting by industrial-scale palm oil plantations dropped, but smallholders felled more trees.

Smallholders account for about 40 per cent of global production, but little is known about them. They include poor villagers with a few trees in their gardens, well-heeled businessmen and migrants settled by government schemes, such as those in Musi Banyuasin.

If smallholders’ market share grew, that would be good for development but bad for the environment. They are hard to monitor and have little incentive to save trees, often selling to middlemen who do not offer markups for green palm oil.

Stricter regulation may be the best way to rein them in. Indonesia’s President, Joko Widodo, has been trying. In 2015 and 2017, he extended a moratorium on converting forest and peatland to plantations.

Last year, he banned the issuance of permits for new plantations for three years. He has also launched an initiative to synchronise land-concession maps, which often differ at the local, provincial and national level and among various interested ministries. If implemented, this would make it easier to hold deforesters to account.

Past moratoriums, however, have not had much success. That is partly because the laws apply only to new requests for land permits, not to concessions already granted or those still going through the application process. Indonesia’s local politicians are powerful and have a long tradition of allowing national parks to be razed in exchange for campaign funding.

The real test of these policies – and those of the industry – will come later this year. The weather is expected to be drier and so more favourable for clearing peatland. And the price of palm oil is forecast to rebound.

Politicians and environmental campaigners will be watching the satellite imagery with trepidation.

The palm-oil industry’s effort to curb deforestation has lots of flaws, but falling prices and wet weather has disguised them - inews.co.uk
.
.
.
Posted by Jeremy Woodward at 14:08