On the River Otter: plans to remove beavers "may be illegal"

There has been some lobbying of MP Hugo Swire:
Futures Forum: On the River Otter: Defra and the beavers: Ottery Council vote to lobby MP
Hugo Swire on wild beavers: I will hold a meeting - but not yet ..... - Claire Wright
Hugo Swire urged to request that DEFRA suspends beaver capture - Claire Wright

It now seems that the trapping of the beavers might be illegal:

Govt plans to capture Devon beavers may be unlawful, warns Friends of the Earth


Friends of the Earth has today (Thursday 25 September) called for an immediate halt to Government plans to capture wild beavers on the River Otter in Devon, warning that any such moves may be unlawful.

In a letter sent to Environment Secretary Liz Truss, the environmental charity outlined its concerns regarding the legality of capturing the beavers, explaining that since Britain formed part of the natural range of beavers - and since there were already free living populations in Scotland - they should be covered by EU laws governing protected species.

In 2013 it was reported that there was a small population of European beavers living and breeding near the River Otter in Devon. Earlier this year the Government signalled its intention to trap them and re-home them in a captive facility.

In a recent meeting in the village of Ottery St. Mary more than a hundred local people, including Councillors, voiced their support for allowing the beavers to remain.

“Beavers belong in England, and are an essential part of our ecosystems – Government plans to trap them should be scrapped. Beavers bring huge benefits to the environment – reducing flooding and boosting fish stocks and biodiversity. Rather than try and get rid of them, we should be thrilled to have them back in our landscape. The Government needs to listen to what local people are saying, instead of taking a knee-jerk response. This is a fantastic opportunity to study the return of a beautiful and iconic creature. The Government says it needs to remove these beavers because of the threat of disease, but that’s just an excuse. They are very unlikely to be carrying infection, having been born in the wild or already quarantined. In any case they could be easily tested and returned to the river.”

Aside from the beavers in Devon there are several other populations in Britain. They are present in the west of Scotland where an official trial reintroduction of 16 beavers is due to end successfully next year, while a second much larger free population of more than 150 animals is already established on the Tay River in Perthshire.

1. Beavers were once widespread in Britain and were found all over the island before being hunted to extinction. The last possible reference to a wild beaver in England comes from 1789, although they had become rare by the 1500s.
2. So far there have been 157 reintroductions in Europe. Beavers are now present in around 30 countries, including Belgium, Netherlands and Denmark.
3. Natural England has previously supported the aim of reintroducing beavers into England, and published a report saying this in 2009.
4. The European Habitats Directive makes it clear that beavers are a protected species when in their natural range.

Everybody is now picking up the story in today's press, and not just in Devon and the UK:
Ministers warned capture of wild beavers may be illegal - Telegraph
Scrap 'illegal' plans to capture East Devon wild beavers, environmentalists urge | Exeter Express and Echo


Trapping wild beavers in Devon would be illegal, FoE warns 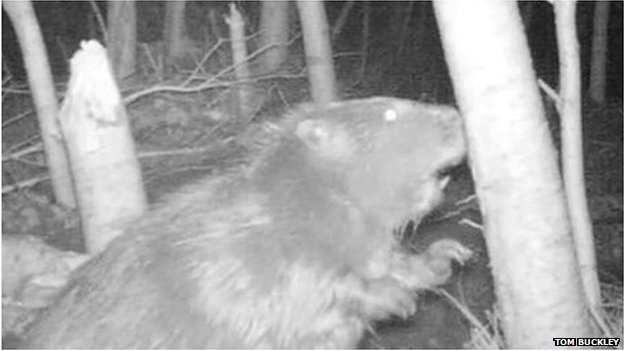 Three beavers have been filmed on the River Otter in Devon

Environmental activists have called on the government to call off a plan to capture a group of wild beavers as it may be illegal.

Friends of the Earth (FoE) said because groups already live in the wild in Scotland the beavers in Devon are protected in England under EU laws. The River Otter beavers are believed to be the only wild ones in England.

The government said they could be carrying disease and wants to test and re-home them in captivity.

The three beavers, thought to be two adults and a juvenile, were first reported to be living on the river in the summer of 2013 and no date has been set for trapping them.'Beautiful creature'

The Department for Environment, Food & Rural Affairs (Defra) said they could be carrying a disease "not currently present in the UK".

In a letter to Environment Secretary Liz Truss, FoE said Britain formed part of the "natural range" of beavers since there were already free living populations in Scotland and they should be covered by EU laws governing protected species.

Campaigner Alasdair Cameron said: "The European Habitats Directive makes it clear that beavers are a protected species when in their natural range. Beavers bring huge benefits to the environment, reducing flooding and boosting fish stocks and biodiversity. The government needs to listen to what local people are saying, instead of taking a knee-jerk response. This is a fantastic opportunity to study the return of a beautiful and iconic creature."

A Defra spokesperson said: "Beavers have not been an established part of our wildlife for the last 500 years and their presence could have a negative impact on the surrounding environment and wildlife. These animals may also carry a disease which could pose a risk to human health. Once captured and tested, we intend to rehome them in a suitable location, and all decisions will be made with the welfare of the beavers in mind."