There has been considerable controversy over plans to build a solar farm in East Devon:
Futures Forum: Is the proposed solar farm at Clyst St Mary to be built on 'prime agricultural land'?

Here is a message from the developers:

I wanted to update you on its progress through planning. It was due to be heard by the planning committee a few weeks’ ago. However, it was withdrawn from the agenda at the last minute after the opponents threatened East Devon District Council with Judicial Review.

As there is no planning committee in May due to the election, it will now be heard at the June meeting - on Tuesday June 16th at 2pm.

You may be aware that there is now no more grid capacity for large-scale renewable projects anywhere in the SouthWest. This project already has grid agreed and if it does not go ahead it would be an awful missed opportunity for renewables in East Devon.

The appeal for the original planning application for a 7.5MW site is also being heard in June (9-10th) although the outcome of that probably won’t be known for a couple of months after that. Of course we are hoping for success with both!

If you would like to attend the planning committee meeting on the 16th or speak at it please let me know.

More information and updates on the project can be found on this website page: http://www.solsticerenewables.com/shepherds/

It is understood that there will be some 'benefits to the community':

A community benefit fund would be set up, which would pay £1,000 per MWp installed capacity (index-linked) for the 25-year lifetime of the solar park. This is likely to amount to £5,000 a year, or £125,000 for the lifetime of the solar farm. We would work with the local Parish Council on how this could best be used to bring economic, social and environmental benefits to the area.

We are also offering an additional £2,000 a year to be used for educational purposes linked with the solar park. We are already working with Clyst. St. Mary primary school, organising a site visit in June (click here to read about the visit) to study renewable energy and biodiversity. Click here to read more about our educational benefits. 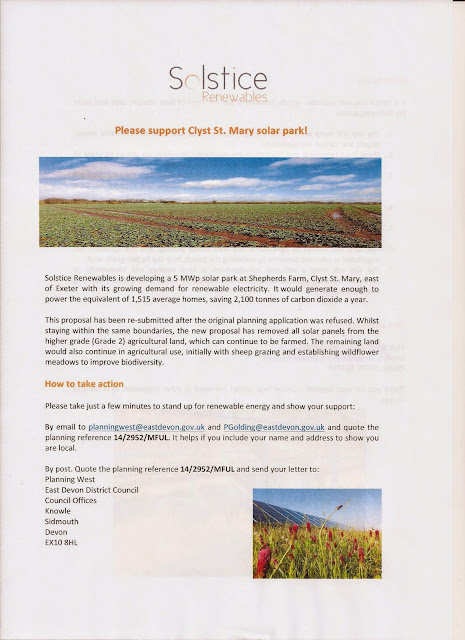 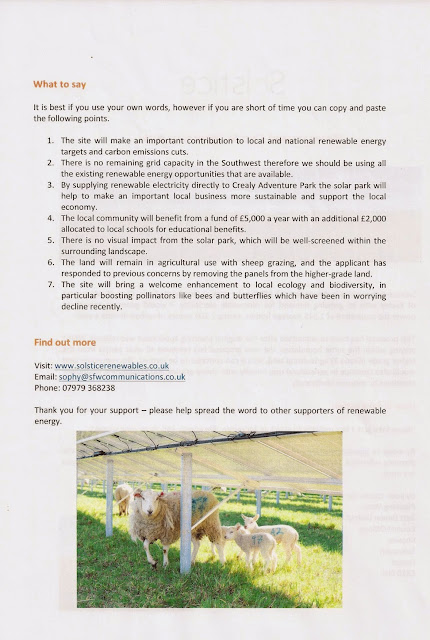 Here is a piece from earlier in the month from the Express & Echo:

Comment: Are the fields of Devon best place for giant solar farms?

Solar power is regarded as one of the solutions to climate change. But giant solar farms springing up around the Westcountry are causing concern because of their impact on the landscape. And there is also the question of who is benefiting from huge subsidies designed to encourage the switch to a low-carbon economy.

In Devon, the issue has been highlighted by a 50-acre solar farm which runs for around a mile alongside the road on Haldon Ridge above Dawlish. The site has been given planning permission for 25 years, and according to one media report will generate £770,000 annual income – £430,000 of which will be from green subsidies.

The development was given permission by Teignbridge council without being discussed by the planning committee. The site is visible from Hay Tor, ten miles away on Dartmoor. And an internal report from the council's heritage and landscape officer warned the development would "detract from its scenic quality".

Of course solar power is contributing to the move towards a low-carbon economy. It provides an alternative to fossil fuels, which produce the carbon dioxide which is blamed for global warming, the trigger behind climate change.


The company behind the development, Solstice Renewables, had a application for a new 25-year solar farm off Oil Mill Lane near Clyst St Mary refused by East Devon council. It has appealed, and meanwhile lodged a revised application.

The proposed solar farm would supply energy to Crealy Park, but there is concern from objectors about its impact on the landscape and the loss of farmland.

The firm has also applied for permission for a smaller solar farm at Kenniford Farm, near Clyst St Mary.

In both cases, the developer says the land would still be farmed, with sheep grazing in winter and wildflower meadows in the summer. And it would set up funds to channel money into community projects.

Combined, the two projects would provide enough electricity to power the equivalent of more than 2,700 homes, and save an estimated 3,900 tonnes of carbon dioxide every year.

Whilst the case for developing low-carbon energy is clear, there seems to be a long way to go to persuade people that the green fields of Devon are the best place for these giant farms. But the big financial returns, partly funded by the taxpapers, means we are likely to see many more. Let's hope our planners can properly balance the needs of wildlife and protecting the landscape with the pressure to cut our carbon output. At least the permissions are limited to 25 years, at which point the full impact can be reviewed.

Comment: Are the fields of Devon best place for giant solar farms? | Exeter Express and Echo

See also:
Futures Forum: “There will definitely be a slowdown in the renewable energy sector in the South West. It may, however, drive innovation for new approaches and energy solutions.
.
.
.
Posted by Jeremy Woodward at 15:59

Hi - events have moved on with Solstice Renewables' solar farm proposals for Shepherd's Farm and Kenniford Farm, and they will not now be decided by the planning committee on June 16th. However, the appeal hearing for the original planning application for the 7.5MW solar farm at Shepherd's Farm will be taking place on June 9th and 10th. If this is successful part of the solar farm will be made available for community ownership under the government's new 'shared ownership' framework.

Thank you.
A further update is here:
futuresforumvgs.blogspot.co.uk/2015/05/latest-planning-application-for-solar_31.html