East Devon and the expropriation of public space

The phenomenon of 'privatising' what is otherwise 'public' space has been gathering pace:

The privatisation of cities' public spaces is escalating. It is time to take a stand


In the first of a series on the changing nature of urban space, academic geographer and gonzo urbanist Bradley L Garrett discusses ‘Pops’ – privately owned public spaces – and asks who our cities are really for

The geographer David Harvey once wrote that “the freedom to make and remake our cities and ourselves is … one of the most precious yet most neglected of our human rights”. Generations of urban theorists, from Lewis Mumford to Jane Jacobs to Doreen Massey, have suggested that the place where cities get “remade” is in the public rather than private sphere. Part of the problem, then, with privately owned public spaces (“Pops”) – open-air squares, gardens and parks that look public but are not – is that the rights of the citizens using them are severely hemmed in. Although this issue might be academic while we’re eating our lunch on a private park bench, the consequences of multiplying and expanding Pops affects everything from our personal psyche to our ability to protest.

This is what the Financial Times had to say earlier this year:

Right to the city: contemporary cities are driven far more by commercial interest than in the radical 1960s
“Beneath the pavement, the beach” was a rallying cry of the 1968 student protesters in Paris.
Ripping up the cobbled paving stones revealed the sand beds on which they were laid and the poetic metaphor took on both the literal appearance of the sandy substrate and the idea that the city was a playground to be reappropriated from the robber barons, politicians and establishment. Through transforming the urban fabric into barricades, a new city of endless possibilities was excavated in the imagination.

IN THE FUTURE OF CITIES

FirstFT is our new essential daily email briefing of the best stories from across the web
As the students dug up the cobbles, Marxist philosopher Henri Lefebvre produced his book The Right to the City. His idea was that the city needed to be taken back through collective action and its processes controlled by its citizens to reflect their needs and desires.
Contemporary cities are driven far more by private interest than was the city of 1968. Almost all major cities then were building huge volumes of social housing and public infrastructure, from schools and hospitals to public housing and public spaces. They were by no means all successful but the feeling was that governments and municipalities had a responsibility to create a modern public city.
The world’s largest architectural office was the London County Council. Housing estates and arts centres flowed from the drawing boards, often unpopular but now revered as the last explosion of municipal vision.
As London was building these projects, the consensus was that the city would continue to shrink and suburbanisation leave it as a commuter and cultural playground that people would visit by car and leave.
Things changed and the city centre became fashionable again, a pattern mirrored in Paris, New York, Sydney and across the world. But this was accompanied by a shift in responsibility for the city.
By the time of the urban renaissance in the 1980s, cities, particularly Anglo-Saxon ones, had been abandoned by the state and left to the private sector.
New public space is determined by commercial needs. It is commonly “donated” to a pseudo-public realm by developers as “planning gain”, or privately owned public space, POPS.
The city wants something back for granting permission for big developments and it may come in the form of a piazza, a street or a park that the public is allowed to use as long as it does so in the right way.
One might argue there is little difference between what cities do now and the way in which those of the Renaissance — financed by the wealthiest patrons, princes, bankers and the Church — were created and that architecture has almost always been a monument to the power of those who funded it.
Today’s new spaces are based around consumption, not civic activity. Piazzas are conceived as places for café terraces, streets as shopping centres, gardens as amenities to increase sale prices.
They are billed as publicly accessible, in the way a hotel or a shopping mall might be. We can use them at the discretion of the owners. They do not belong to us, which is the very meaning of public space.
“We’re making sterile, heavily policed and controlled zones, patrolled by private security,” says Anna Minton at the University of East London. Swaths of activities are banned, she adds, from skateboarding and photography to “more importantly, protest”.
New York-based architect and writer Michael Sorkin argues that the erosion of our public space “comes simultaneously from the elimination of privacy by Big Brother’s all-seeing eye and from the privatisation of that same space as so-called ‘public-private partnerships’”.
Such critical perspective suggests that, with transferral of ownership and continuity of use, changes may look small but amount to a redrawing of the nature of the city: a privatisation of public life.

Although others would not agree:
What's so bad about the privatisation of public space? | ECF Labs

This blog has looked at the issue before:
Futures Forum: Public Space

It has also looked at the issue in the context of the District Council 'appropriating/expropriating' its own, public land:
Futures Forum: Knowle relocation project: Legal notice for 'Disposal' and 'Appropriation' of Open Space: reminder from SOS: Deadline for comments >>> Friday 20th February
Futures Forum: Knowle relocation project: expropriation & eminent domain >>> "The principle that there is a public realm of common citizenship and essential public goods and space which ought not to be appropriated for private benefit."

The Knowle 'relocation project' is but one example - where the current upper lawns will probably become the front gardens of the proposed development on the site:

The Elizabeth Hall and its public gardens in Exmouth ... have meanwhile become a hotel:

Back in Sidmouth, the question is whether the Port Royal area

... will become a 'private development' with 'private space': 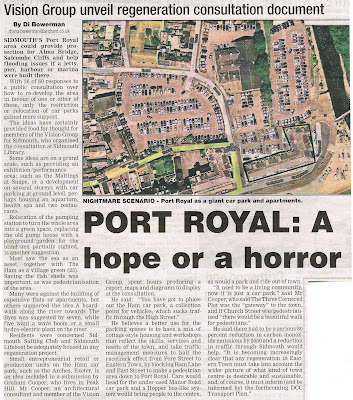 It certainly needs to be clarified as to who owns what before anything anywhere is sold off:
Futures Forum: Plans for Port Royal: who owns what
.
.
.
Posted by Jeremy Woodward at 15:09