Climate change: and the false hope of the UN conference >>> "We must look at the full spectrum of geoengineering." But "the high political and environmental risks associated with this must be made clear so that it is never used as an alternative to making the carbon cuts that are urgently needed."

How can we 'deal with' climate change?
Futures Forum: Climate change: perceptions and solutions: a summary

A piece in today's Independent didn't mince its words:

The Paris Agreement to tackle global warming has actually dealt a major setback to the fight against climate change, leading academics will warn.
The deal may have been trumpeted by world leaders but is far too weak to do help prevent devastating harm to the Earth, it is claimed. 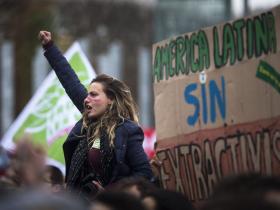 The one word that nearly killed the climate deal

In a joint letter to The Independent, some of the world’s top climate scientists launch a blistering attack on the deal, warning that it offers “false hope” that could ultimately prove to be counterproductive in the battle to curb global warming.
The letter, which carries eleven signatures including professors Peter Wadhams and Stephen Salter, of the universities of Cambridge and Edinburgh, warns that the Paris Agreement is dangerously inadequate.
Because of the Paris failure, the academics say the world’s only chance of saving itself from rampant global warming is a giant push into controversial and largely untested geo-engineering technologies that seek to cool the planet by manipulating the Earth’s climate system.
The scientists, who also include University of California professor James Kennett, argues that “deadly flaws” in the deal struck in the French capital last month mean it gives the impression that global warming is now being properly addressed when in fact the measures fall woefully short of what is needed to avoid runaway climate change.
This means that the kind of extreme action that needs to be taken immediately to have any chance of avoiding devastating global warming, such as massive and swift cuts to worldwide carbon emissions – which only fell by about 1 per cent last year – will not now be taken, they say.

UN climate change announcement
“The hollow cheering of success at the end of the Paris Agreement proved yet again that people will hear what they want to hear and disregard the rest. What they disregarded were the deadly flaws lying just beneath its veneer of success,” the academics write in the the letter, also signed by Dr Alan Gadian of the University of Leeds and Professor Paul Beckwith of the University of Ottowa in Canada.
“What people wanted to hear was that an agreement had been reached on climate change that would save the world while leaving lifestyles and aspirations unchanged. The solution it proposes is not to agree on an urgent mechanism to ensure immediate cuts in emissions, but to kick the can down the road.”
The authors don’t dispute the huge diplomatic achievement of the Paris Agreement – getting 195 world leaders to sign up to a global warming target of between 1.5C to 2C and pledging action to cut carbon emissions.
But they say the actions agreed are far too weak to get anywhere close to that target. Furthermore, the pledges countries have made to cut their carbon emissions are not sufficiently binding to ensure they are met, while the Paris Agreement will not force them to “rachet” them up as often as they need to.
Of even greater concern, they say, is the lack of dramatic immediate action that was agreed to tackle global warming. The Paris Agreement only comes into force in 2020 – by which point huge amounts of additional CO2 will have been pumped into the atmosphere. The signatories claim this makes it all but impossible to limit global warming to 2C, let alone 1.5C.
“The Paris Agreement’s heart was in the right place but the content is worse than inept. It was a real triumph for international diplomacy and sends a strong message that the sceptics have lost their case and that the science is correct on climate change. The rest is little more than fluff and risks locking in failure,” said Professor Kevin Anderson of Manchester University, who has not signed the letter but agrees with its argument.

Peter Wadhams, professor of ocean physics at the University of Cambridge and a signatory of the letter, said the prospects for curbing global warming following the Paris Agreement are now so dire that he advocates a charge into geo-engineering – not something he recommends lightly. “Other things being equal I’m not a great fan of geo-engineering but I think it absolutely necessary given the situation we’re in. It’s a sticking plaster solution. But you need it because looking at the world, nobody’s instantly changing their pattern of life,” Prof Wadhams said.
Pumping huge amounts of water spray into clouds to make them bigger and brighter so that they reflect sunlight back into the atmosphere – known as Marine Cloud Brightening – offers the best geo-engineering prospect, he said.
Geo-engineering technologies – which also envisage putting giant mirrors in space or whitening the surface of the ocean to deflect incoming solar radiation back into space – are controversial because of fears that they are technically demanding, would be extremely expensive while interfering with the climate system could have damaging unintended consequences for the planet.
A spokesman for the United Nations Framework Convention on Climate Change  said: “The Paris Agreement is a resounding declaration of political intent by all the world’s nations. We are fully confident that countries are not sitting on their haunches waiting until 2020 before doing anything,” he said.

The hollow cheering of success at the end of COP21 agreement proved yet again that people will hear what they want to hear and disregard the rest. What people wanted to hear was that an agreement had been reached on climate change that would save the world while leaving lifestyles and aspirations unchanged.
What they disregarded were the deadly flaws lying just beneath its veneer of success.  As early as the third page of the draft agreement is the acknowledgment that its CO2 target won’t keep the global temperate rise below 2 deg C, the level that was once set as the critical safe limit. The solution it proposes is not to agree on an urgent mechanism to ensure immediate cuts in emissions, but to kick the can down the road by committing to calculate a new carbon budget for a 1.5 deg C temperature increase that can be talked about in 2020.
Given that we can’t agree on the climate models or the CO2budget to keep temperatures rises to 2 deg C, then we are naïve to think we will agree on a much tougher target in five years when, in all likelihood, the exponentially increasing atmospheric CO2 levels mean it will be too late.
More ominously, these inadequate targets require mankind to do something much more than cut emissions with a glorious renewable technology programme that will exceed any other past human endeavour. They also require carbon to be sucked out the air. The favoured method is to out-compete the fossil fuel industry by providing biomass for power stations. This involves rapidly growing trees and grasses faster than nature has ever done on land we don’t have, then burning it in power stations that will capture and compress the CO2 using an infrastructure we don’t have and with technology that won’t work on the scale we need and to finally store it in places we can’t find.  To maintain the good news agenda, all of this was omitted from the agreement.
The roar of devastating global storms has now drowned the false cheer from Paris and brutally brought into focus the extent of our failure to address climate change. The unfortunate truth is that things are going to get much worse. The planet’s excess heat is now melting the Arctic Ice cap like a hot knife through butter and is doing so in the middle of winter. Unless stopped, this Arctic heating will lead to a rapid release of the methane clathrates from the sea floor of the Arctic and herald the next phase of catastrophically intense climate change that our civilisation will not survive.
The time for the wishful thinking and blind optimism that has characterised the debate on climate change is over. The time for hard facts and decisions is now.  Our backs are against the wall and we must now start the process of preparing for geo-engineering. We must do this in the knowledge that its chances of success are small and the risks of implementation are great.
We must look at the full spectrum of geoengineering. This will cover initiatives that increase carbon sequestration by restoration of rain forests to the seeding of oceans. It will extend to solar radiation management techniques such as artificially whitening clouds and, in extremis, replicating the aerosols from volcanic activity. It will have to look at what areas that we selectively target, such as the methane emitting regions of the Arctic and which areas we avoid.
The high political and environmental risks associated with this must be made clear so that it is never used as an alternative to making the carbon cuts that are urgently needed. Instead cognisance of these must be used to challenge the narrative of wishful thinking that has infested the climate change talks for the past twenty one years and which reached its zenith with the CO21 agreement. In today’s international vacuum on this, it is imperative that our government takes a lead.
Signed by
Professor Paul Beckwith, University of Ottowa
Professor Stephen Salter – Edinburgh University
Professor Peter Wadhams – Cambridge University
Professor James Kennett of University of California.
Dr Hugh Hunt – Cambridge University
Dr. Alan Gadian -Senior Scientist, Nation Centre for Atmospheric Sciences, University of Leeds
Dr. Mayer Hillman - Senior Fellow Emeritus of the Institute of the Policy Studies Institute
Dr. John Latham – University of Manchester
Aubrey Meyer  – Director, Global Commons Institute.
John Nissen -  Chair Arctic Methane Emergency Group
Kevin Lister - Author of "The Vortex of Violence and why we are losing the war on climate change"