An interesting programme is coming up this Wednesday on BBC 2:

The Town That Took On The Taxman, TV review: Rebellious business owners get a crash course in tax evasion 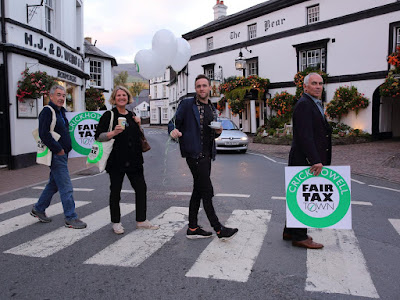 Pleading for a “level playing-field” for small businesses, they ask for the same “VIP treatment” that HMRC gives the likes of Google, which is regularly called in for informal discussions about its tax arrangements.

But Mr Harra tells them: “There are 5m small businesses and 2,000 large ones. I don’t have the ability to put a named person on every small business.” HMRC puts its resources into “understanding what high-risk multinationals are doing.”

The only way to give HMRC a major headache, the Welsh traders are independently advised, is by turning their protest into a national movement which would force the taxman to plug a substantial loss of revenue.

Small towns across Britain are now signing up to the “fair tax” campaign including Hebden Bridge in Yorkshire and Leek in the Peak District.

It's about a very ordinary town of small shops and traders - similar to the likes of Sidmouth - who are 'taking on' the Chancellor over the ease with which bigger businesses, by avoiding corporation tax, are putting them at a disadvantage: 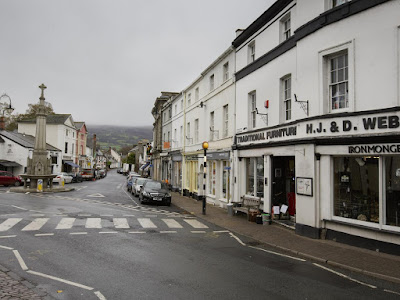 Crickhowell: Welsh town that took on the taxman sets its sights on the Tories | Home News | News | The Independent

A couple of years ago, a campaign was launched:

Fair Tax Mark | Because Fair Tax is at the heart of society.

One of the main complaints has been unfair competition from the likes of Caffé Nero - and Starbucks:

When Ethical Consumer magazine cast a critical eye over coffee shops’ tax affairs this year, it singled out small companies for praise. Citing AMT, which runs coffee stalls in railway stations, it said it “even boasts about [this] on its counter, with a sign saying: 100% taxes paid”.

Paying tax would once have been an unlikely selling point. But corporate tax avoidance has become the number one issue that the public wants companies to address, according to research by the Institute of Business Ethics.

In fact, the main coffee chain in Sidmouth, which has been present for a couple of years, was praised for not avoiding tax:

Starbucks boycott and the rise of Costa

The Starbucks boycott over tax avoidance was not an organised affair, yet plenty of evidence emerged about how effective it was. This makes it a very useful case for those studying ethical consumption campaigns, where direct evidence of impact is often difficult to come by.

It also served as a wake-up call for tax avoiders, demonstrating that the simple profit-seeking mathematics that had driven the avoidance in the first place was perhaps not that clever after all. Suddenly, high-street tax avoiders were looking vulnerable.

The Guardian reported a 2012 YouGov poll11 which asked: “If there were a Costa Coffee, a Starbucks and a Caffè Nero next door to each other, which one would be your first choice to visit?”

Costa Coffee’s sales were reported to have risen by 7.1% in the three months immediately following the revelations and campaigning around Starbucks’ tax position.[12]

Andy Harrison, chief executive of Costa’s owner Whitbread, told the Financial Times, “It is difficult to define the impact of [the Starbucks tax issues] into the figures, but we remain the UK taxman’s favourite coffee shop … Starbucks has taken a bit of a knock.”

All this makes UK coffee shops a particularly interesting place for discussions about tax. It has also been incredibly helpful in explaining the benefits of the Fair Tax Mark.

And yet, Costa has not escaped criticism - not that this report from the Daily Mail last year necessarily includes every outlet!
Squalor inside Costa coffee shops revealed as chain is ordered to clean up its act  | Daily Mail Online

Sidmouth has two independent bookshops, but for how long?
Google, Amazon, Starbucks: The rise of 'tax shaming' - BBC News
Amazon pays just £11.9m in tax on £5.3bn worth of UK sales | This is Money
MPs accuse Amazon of being ‘morally complicit’ in sales tax fraud - FT.com

It is the SME/small-and-medium-sized-enterprise which is the mainstay of the economy - particularly East Devon's economy:
Futures Forum: "Statistics show us that small and medium-size businesses (including those in tourism) are our life blood."
Futures Forum: Giving small businesses more opportunity >>> how local government can help

Finally, when it comes to paying less tax, a regular complaint by traders is that the regime for charity shops puts other businesses at a disadvantage: 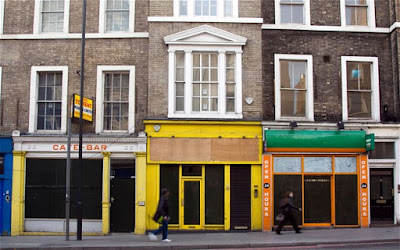