Developers' contributions to infrastructure are 'inadequate'

Last month, the Herald ran a story about the bad state of outdoor recreation facilities:

Are Sidmouth play parks the ‘worst around’? 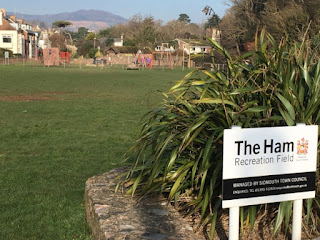 A review of Sidmouth’s play areas has been called for after it was revealed many families are shunning them and travelling as far as Teignmouth and Paignton instead.

Some parents have branded the town’s facilities as ‘the worst around’ and a ‘missed opportunity’ - despite tens of thousands of pounds being invested in recent years.

The chairman of Sidmouth Town Council, Jeff Turner, responded by telling the Herald: “It’s struck me that we could do rather better.”

Dad-of-two Matt Portman said at a Sidmouth Chamber of Commerce business breakfast this week that more investment is needed to keep young people in Sidmouth. Accountant Mr Portman told Councillor Turner, who was a guest at the meeting, that a number of families, including his own, travel to Seaton, Teignmouth and Paignton.

Mr Portman told the Herald: “I’m not really aware of many who will make a special trip to visit the Ham. Sidmouth has a lot to offer with its independent trading, well-main-tained shops and many great eateries. Despite what many people think, kids do enjoy outdoor play and would not always prefer to be sat in front of a computer or TV.

“I know that play equipment costs a large amount of money to purchase and also to maintain, but there are significant benefits avail-able where play areas are constructed correctly. There is a real missed opportunity here for the town, especially given the excellent location of the Ham as it is near the pool, the beach and parking for non-residents.”

The matter has been a hot topic on the Herald’s Facebok page, where parents have shared their hopes for improved play facilities. Laura Southcott posted: “Poor old sunny Sidmouth probably hosts the worst play parks around, to be honest. Being that Sidmouth is supposedly trying to encourage young families, we do need to start putting in some efforts for youngsters’ entertainment. Before I drove it was a nightmare. Please improve play areas in our beautiful town. We have an amazing beach, but in the winter there’s not a lot to do.”

Since 2011, the town council has spent £50,000 to improve the Ham and has earmarked ‘section 106’ money, cash from developers, to revamp it further.

Work is also under way on a £60,000 over-haul of the Manstone Lane play facility to turn into a multi-games area for all ages. EDDC also spent £29,000 to install new equipment in the area by The Byes.

Cllr Turner, who is a grandfather-of-two, said: “Following the [chamber of commerce] meeting, it occurred to me that perhaps we need to find out how the play parks need to be improved. If people are travelling to Teignmouth, maybe we need to go and have a look and see what’s different about it.”

On the front page of the last week's Herald, the promised £60k investment was celebrated: 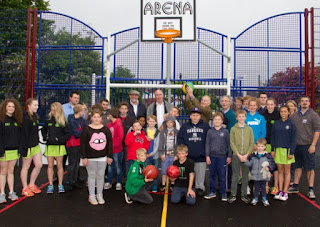 An ‘outdated’ and ‘tired’ games area has been brought into the 21st century after receiving a £60,000 makeover.
The facility at Manstone Lane has been turned into a multi-use games area for all ages after town and district councils splashed ‘Section 106’ funding - cash from developers - on the project.

Residents put a games area at the top of a wish-list when asked by councillors how to spend £250,000 on outdoor sports facilities in the town.

Youngsters from Sidmouth Youth Centre and the newly-formed Sid Valley Netball Club enjoyed the new facility when it officially opened on Tuesday night.

Newly-elected chairman of the town council Ian McKenzie-Edwards said: “I am extremely pleased to see the previous tired games area getting a 21st century overhaul.”

The refurbishment of the site included new floodlights and new markings and goals for sports such as basketball, netball, five-a-side football and skill walls.

Councillor McKenzie-Edwards said the Manstone area was a ‘centre of activities’ for youngsters with the youth centre, football club, games area and skate park nearby, but added the council was looking to invest and improve facilities.

He added: “It’s a progressive thing, there is an ongoing review. We are not going to rest on our laurels. Other things are actively being looked at but we cannot do it all at once.”

The town and district councils consulted Sidmouth Youth Centre on the design to include colours that match the newly-painted mural on the side of the building.

An East Devon District Council spokeswoman said: “Since 2008, we have been allowing the community to make the decisions on how money from new developments for play and sport in the area is spent. This games area was a joint project between us, the town council and the local community. It’s great to see how popular it’s being with local young people already.”

Sidmouth Town Council is working Devon County Council to transfer ownership of the land for it to maintain the games area for the community.

However, further questions have been posed about the real value which the S106 cash or the new Community Infrastructure Levy provides for communities:

“The methods used to capture development gain for local communities are inadequate, the Royal Town Planning Institute (RTPI) has said.
It has commissioned research to see how the section106 and community infrastructure levy (CIL) regimes compare to alternatives used abroad to capture the uplift in land value resulting from planning permission or public investment on or near a piece of land.

CIL was found ineffective by a working group that reported to ministers in February.

The RTPI’s project will compare the current mechanisms with a simple tariff mechanism and two variants of the impact fee approach used in North America.
Each approach’s ability to raise money, and its attractiveness and ease of implementation will be tested via interviews with planners, planning consultants, lawyers, valuers and developers.

RTPI president Stephen Wilkinson said: “Infrastructure is critical to housing delivery and economic growth. At a time when public finance is squeezed we have to look at new funding models to ensure infrastructure can be built at the speed and scale we need.

“We are missing a trick by not accessing the vast potential of rising land values which currently go directly to landowners. Rising land values are a reasonable place to look for infrastructure funding and international evidence suggests there are fairer, more effective ways of sharing this gain.”

He said the present methods successfully clawed back some uplift but did not allow “local authorities to be proactive by using rising land values to fund land assembly and deliver housing”.

With some other, similar ideas:
Futures Forum: A solution to our housing problems: tax the land to get greater density housing
Futures Forum: A land conference: Exeter: Saturday 21st March >>>>> "How can we grow a proper relationship between people and place?"
.
.
.
Posted by Jeremy Woodward at 02:00