Against charity: "Charity is a cold grey loveless thing. If a rich man wants to help the poor, he should pay his taxes gladly, not dole out money at a whim."

Attlee is said to have said (or at least expressed these sentiments):
"Charity is a cold grey loveless thing. If a rich man wants to help the poor, he should pay his taxes gladly, not dole out money at a whim":
Clement Attlee - Wikiquote
Clement Attlee on charity - taxresearch.org.uk

Richard Murphy of Tax Research UK is pushing for a 'fairer tax system':
The Joy of Tax: Amazon.co.uk: Richard Murphy: 9780593075173: Books
The reasons to tax - taxresearch.org.uk

He has recently re-posted the Attlee quote:
Richard Murphy on Twitter: "First they came for Oxfam https://t.co/lK9R10pIoz via @richardjmurphy"

Which this blog has in turn referenced:
Futures Forum: Against charity: outrage and self-righteousness "will only damage the interests of the most vulnerable"

This blog has also looked at how 'philanthropy' is actually about preferring to pay fewer taxes:
Futures Forum: Against charity: against philanthropy

And how some would consider their giving to charity not as 'giving back to society' - but as a free choice:

But what is not socially useful is to call these or any other contributions “giving back.” The implication of the term is that the donor has taken something from society by earning money and that this has created an obligation to return something through charity.

This view of charity is very counterproductive and leads to the general demonization of markets which has become rife in our society. The important point is that the act of creating wealth is itself productive. In a market economy, the only way to become wealthy is to create some good or service that others find valuable. The wealthy may contribute to social good by giving to charity, but before that, they created even more social good through the very behaviors that created their wealth.

Futures Forum: Against charity: Creating wealth does more good than 'giving it back'

Clearly, there are several motivations at play when we 'give':
Wealthy give to charity to feel good, not avoid tax - Financial Times

But a consequence of giving the money you earn to charity (rather than the state) is that it is counter to the social democratic notion of progressive taxation:

The charitable giving model is an undemocratic use of funds 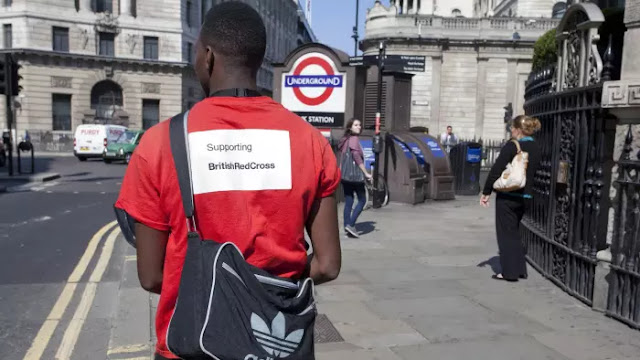 If you haven’t been in the habit of making regular donations to Oxfam, you might now be feeling a little smug. After all, you haven’t been suckered into misdirecting your cash towards what is now known to be an unpleasantly imperfect organisation. None of your money has been spent on salaries for employees who reckon that the perks of a foreign posting include the foreign prostitutes.

I’m afraid I have some bad news. You have not only donated to Oxfam, you have been doing so for years. And you still are. Oxfam may have given up on applying for millions in government grants this year, but tens of thousands of people still give money — a total of £54m in the year to March 2017 — and the vast majority of those donations attract Gift Aid. This allows registered charities to claim back from the Treasury any basic-rate tax paid on gifts to those organisations.

For each £100 donated to Oxfam, its accountants will go to the public coffer and demand another £25. Higher-rate taxpayers can then claim back £25 in their self-assessments. Additional-rate payers can ask for £31.25.

This means that every £100 given to charity by a basic-rate taxpayer will cost the Treasury £25, £100 given by a 40 per cent taxpayer costs £50, and the same amount from an additional rate taxpayer, costs £56.25. If, for example, Jeff Fairburn, the newly super-rich chief executive of housebuilder Persimmon, hands over £10m of his bonus to charity, his gift will (assuming it would all attract tax at 45 per cent) cost the Treasury — and hence the rest of us — £5.65m.

The phrase “Gift Aid” somehow suggests there is free money available. There is not. If Mr Fairburn gave his £10m to his favourite museum, the rest of us would instantly be down the equivalent of 100-odd primary school teachers for a year. The more goes in Gift Aid, the less there is left for public services.

Add in other state subsidies offered to official charities (business rates relief, VAT relief, exemptions from capital gains and dividend taxes) and the money redirected from the state to registered charities starts to add up: the subsidisation of the charitable sector in the UK costs well over £6bn a year.

This situation is not unique to the UK. Most countries offer tax credits of some sort for charitable giving. But the UK is remarkably lenient. We put very few limits on Gift Aid (even the US limits it to 50 per cent of earned income), we refuse very few applications for charitable status, and we do little to regulate existing charities.

That’s not good. The state urgently needs cash to spend on most people’s priorities: transport, infrastructure or education, for example. The ideal behind the progressive collection of taxation is the creation of a large pool of funds that can be used to pay for the provision of the services demanded by an electorate. Letting people opt out of this system and direct the money they owe in tax to one special interest undermines democracy.

The problem is particularly bad when practically no discretion is applied to what kind of organisation counts as a charity. Take religion. About one-third of US charitable donations go to religious organisations. In the UK is it about 20 per cent. Is the taxpayer happy to support religion on this scale?

What about the several charities in the UK devoted to the promotion and practise of homeopathy? The UK medical establishment is clear that homeopathy is “at best . . . a placebo and a misuse of scarce NHS funds”.

The NHS will no longer fund homeopathy, so how does subsidising it offer value to the general taxpayer? It’s absurd. The existence of Gift Aid means the wealthy have more say over how our scarce resources are allocated than the less well-off — the more you give, the more tax you are able to hypothecate.

Would toning down tax relief make a difference? Most research suggests not. But if we watch the US we will soon find out. Part of Donald Trump’s tax reform involves raising the standard income tax deduction for most people substantially — a plan that vastly reduces the value of charitable tax deductibles.

One standard argument is that we need to regulate the sector more closely. That would allow us to avoid subsidising the wasteful and force the kind of oversight of big charities that would find out the bad apples sooner rather than later.

The UK’s Charitable Commission constantly claims that what it needs is more resources. What they actually need is fewer official charities. A good 99 per cent of the organisations with charitable status in the UK should have it removed. They can carry on accepting donations and doing their work, but as civic organisations rather than state-sanctioned and subsidised bodies. A charitable endeavour should be defined by its intention and actions, not its status.

Reducing the number of charities would mean they can be properly regulated, inspected and held to the same standards of value and behaviour as all other publicly financed institutions. Salaries can be brought back down to earth, expenses reduced and senses of entitlement removed. The savings can be redirected to core state services.

None of this is likely to be popular, but given the increasingly obvious failures of much of the third sector, a global crackdown on charitable tax breaks is on its way. The UK has a great opportunity to use the horrors at Oxfam as motivation to lead reform of the sector.

The writer is editor-in-chief of MoneyWeek

The charitable giving model is an undemocratic use of funds - Financial Times
.
.
.
Posted by Jeremy Woodward at 01:00