Climate change: and snow in Devon

Apparently, though, all this snow shows 'there's no such thing as global warming':
Storm Emma proves climate change is fake, says Janet from Bromley | The London Economic

Actually, it's the warming of the Arctic which is causing problems in these parts:
'Beast from the East' and freakishly warm Arctic temperatures are no coincidence - The Conversation
Arctic set to be warmer than parts of UK as temperatures hit 30C higher than average | The Independent
Three Reasons Scientists Are Freaked out by Crazy-High Arctic Temperatures - Futureism

Here's a simple guide to what might seem to be a contradiction:

Q&A: What does all this snow mean for climate change?


Why are scientists worried about freezing temperatures in winter, is the beast from the east a freak event – and what is the polar vortex? 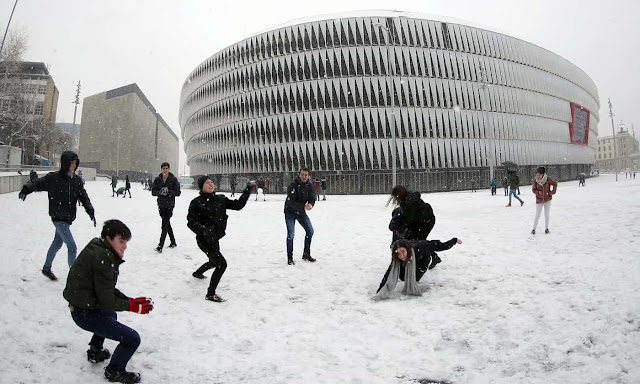 Q: Snow in winter. That feels reassuringly normal. Does this mean the climate has fixed itself?

A: Unfortunately not. In fact, many scientists are concerned this is a prelude to more extreme and less predictable weather.

Q: What are they worried about?

A: In the past couple of weeks, there has been a heatwave in the sunless Arctic even though the northern polar region has not had any sunlight since October. At times it has been warmer than London, Paris or New York.

Q: What is so unusual about that? We have known for some time that the Arctic is warming.

A: Yes, but even veteran climatologists have been shocked by the recent temperature spike. Instead of the gradual year-by-year rise that they were expecting, there has been jolt upwards that experts have described as “crazy”, “weird”, “shocking” and “worrying”.

Q: What are the numbers?

A: From 17 to 25 February, there were 10 consecutive days where temperatures were above freezing for at least part of the day at the world’s most northerly land weather station – Cape Morris Jesup at the northern tip of Greenland. In total, the monitoring station has recorded 61 hours above 0C. According to Robert Rohde, lead scientist of the Berkeley Earth monitoring organisation, that is more time above freezing than the combined total of January through April for all previously observed years since the station opened in 1981. Plotted on a graph, this is so far outside of the historical range that Michael Mann, director of the Earth System Science Center at Pennsylvania State University, said the numbers represent “an anomaly of anomalies.”

Q: Could it be a one-off freak event?

A: Possibly. In climate terms, a few weeks is not nearly long enough to determine whether a new trend is emerging. Some scientists believe this could be an extreme case of natural variation. Temperatures fluctuate wildly at the north pole, though it is not normally as warm, as often or for so long.

Q: So why worry? I feel sorry for the polar bears, but nobody lives in the north pole.

A: There is another theory about what is happening that could have much wider implications. The biggest concern is that this might indicate a weakening or collapse of the polar vortex.

Q: What is the polar vortex?

A: It is the circle of strong winds, including the jet stream, around the Arctic that act as a buffer or insulation, keeping the cold air mass in and the warm out.

Q: Why would it weaken?

A: The polar vortex gets its strength from the difference in temperature between the normally freezing Arctic and warmer more southerly mid-latitudes. But climate change is reducing the gap because the north pole is warming much faster than the global average.

Q: Is this a problem?

A: The polar vortex is one of the world’s climate regulators. Any weakening would accelerate ice melt and add to instability and uncertainty. It could also trigger the release of methane – a very strong greenhouse gas – trapped in the tundra.

Q: Could it be connected to the blizzards that many people are experiencing?

A: In December, the US National Oceanic and Atmospheric Administration warned Arctic sea ice was declining at the fastest rate in at least 1,500 years with an impact that would be felt far outside the region and affect the lives of every single American. One of the research team, Jeremy Mathis, compared the Arctic to the planet’s refrigerator.

“But the door to that refrigerator has been left open,” he said. “And the cold is spilling out, cascading throughout the northern hemisphere.”

Q: What can be done?

A: Beyond blindly hoping this is an anomaly, climate activists say the warming of the Arctic highlights the need for urgent political action to rapidly reverse deforestation and phase out fossil fuels.

Q&A: What does all this snow mean for climate change? | Environment | The Guardian

Meanwhile, there are corporations taking all this very seriously:
Storm Emma and the Companies Fighting Climate Change | Jobbio Journal
.
.
.
Posted by Jeremy Woodward at 01:00